Just one example of how Bexley Conservatives bend the truth

On 27th March 2017 Parliament passed into law the deliberations of the Boundaries Commission following a public consultation that Bexley should from May 2018 be represented by 45 Councillors in 17 wards instead of 63 across 21. All three political parties were in favour of the reduction having promised to push for one in their 2014 election manifestos. 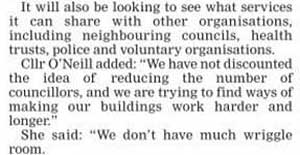 Council Leader Teresa O’Neill had first said a reduction might be necessary in 2010 but did nothing about it.

The Conservatives similarly did nothing about their promise following the May 2014 election but Labour Councillors lost no time reminding them of the promise.

In July 2014, Councillor Seán Newman (Labour, Belvedere) took the lead by proposing that the number of Bexley Councillors should be reduced by a third.

This is what his Motion said…

It would be difficult for any honest person to argue that in 2014, Labour Councillors were not in favour of reducing the number of Councillors; their party was the first to attempt to fulfill their manifesto promise. However nearly three years later that is exactly the message that Bexley Conservatives is trying to convey to the public. Not for the first time they are prepared to lie in any way that they can.

This Tweet is typical of many posted by Bexley Tories immediately after the law was changed. They are trying very hard to convince voters - there will an election in 13 months time - that Labour Councillors were against reducing the numbers. It’s a big fat lie.

As might be expected, Councillors Peter Craske (Conservative, Blackfen & Lamorbey), Philip Read (Conservative, Northumberland Heath) and John Davey (Conservative, Crayford) took a leading role in the dissemination of that lie but it is disappointing to see others joining in.

It is apparent that I was mistaken in my belief that Councillor Louie French (Conservative, Falconwood & Welling) would never stoop to their level of dishonesty but he too got behind the official message. (See associated Twitter post.)

The Mayor in 2014 (Councillor Howard Marriner, Barnehurst) refused a debate on the Labour Motion and after it had been proposed by Councillor Newman and seconded by Councillor Joe Ferreira it was immediately voted down by Conservative Councillors. They were not in favour of a reduction to 42 Councillors.

Anyone as dishonest as a Bexley Tory might argue that it was the Conservatives who voted against Labourְ’s proposal to reduce the number of Councillors in the borough, not the other way about.

Councillor Peter Craske proposed a modified version of the Labour Motion which did not call for any specific number of Councillors.

He suggested that the Boundaries Commission should be allowed to decide the appropriate number of Councillors, whether that be a decrease or an increase.

It was a reasonable enough suggestion and apart from the usual digression into unnecessarily insulting Labour members there was merit in his argument.

He said that both UKIP and Labour had campaigned for Councillor numbers to be reduced by one third at the election two months earlier and the electorate had rejected both parties. They had in effect rejected the figure of 42.

His preference was that politicians had no say in the matter and the numbers and ward boundaries should be decided by an independent process. It was a more than reasonable point.

Councillor Craske’s Amendment was seconded by Councillor D’Amiral (Conservative, Blendon & Penhill) who said it was an improvement on Labour’s original Motion and the Boundaries Commission would not accept a proposal to change Councillor numbers without a review of ward boundaries. It was another reasonable point.

Councillor Newman thought the Amendment was “too vague” and it might be “another attempt to kick to proposal into the long grass” as had happened four years earlier.

Councillor John Davey (Conservative, Crayford) was against reducing Councillors “by an arbitrary number” but “would be very pleased to see a large reduction in the number of Councillors in the north of the borough in four years time”.

“The Labour group had only put forward their knee jerk proposal for political advantage and was not really interested in improving the life of residents.” Neither is Davey, if he was he would not flit from one ward to another at every election to improve the life of no one but himself!

Councillor Chris Beazley (UKIP, St. Michael’s) was concerned that the Conservative Amendment could produce an increase in Councillor numbers.

Councillor Philip Read said that Labour’s enthusiasm for reducing Councillor numbers was a “Damascene conversion” and heaped sarcastic praise on them for wanting to see a reduction in expenditure. “It was good to see Labour agreeing with us” however their fixed number of 42 “was typical short term thinking”. Like Councillor Davey, Philip Read though Labour’s proposal was “a purely political move”. He “expected Labour to support the Amendment”.

Councillor David Leaf (Conservative, Longlands) who is in love with the sound of his own voice wished to “agree with everything my Conservative colleagues have said” and the Labour Motion was “a gimmick”. He said that the number of electors in Bexley was lower than the average of London boroughs and “maths suggested the number [of Councillors] should be in the region of 56” and “42 will make this Council look ridiculous”.

Councillor Sharon Massey (Conservative, Danson Park) said that the Boundaries Commission would “rip up” a proposal for 42. She believed the number must be subject to a consultation. 42 was “a number picked out of thin air”.

Council Leader Teresa O’Neill said the Labour Motion was disingenuous but “it is not a party political thing, everyone in the Chamber agrees there must be a reduction, it’s how we bring it about”.

Teresa O’Neill says “This is not a party political thing”.

In my opinion what the Conservatives said in support of their Amendment was entirely sensible and I have no idea why Labour Councillors voted against it. Maybe they were just following their manifesto commitment to reduce by one third just a little too literally.

Labour Councillors should know by now that they are up against people who are forever plotting their downfall by fair means or foul but despite that Labour voted against allowing the Boundaries Commission to be wholly responsible for the decision. As we now know, the Labour group wished to see a more severe cut than will be seen in 2018.

The recording of the entire Council meeting held on 23rd July 2014 clearly shows that Councillors Craske, Read and O’Neill all accepted that Labour Councillors wanted to see a reduction in Councillor numbers, albeit in somewhat sarcastic tones. The parties differed only in their methodology.

Councillor Leaf suggested that 56 might be the mathematically correct number, but there is an election coming so all the truth has to be swept away as soon as possible to be replaced by a lie.

It was always Inevitable that four years later the bunch of unscrupulous liars who control Bexley would be doing their utmost to fool the electorate. To so strongly imply that Labour were against cutting Councillor numbers is a big fat lie of the sort too often seen in this borough.

Bexley Council is built on lies.

This is an archived copy of the Site’s Index page which first appeared on 4th April 2017. For the current Index page please use the Home menu above. (Site intro.)