Ye Olde Leather Bottle at the bottom end of Heron Hill in Belvedere bears the distinction of being the only pub of the four which are, or rather were, within easy walking distance of home that I have ever been inside, and that was a good twenty years ago and only once. 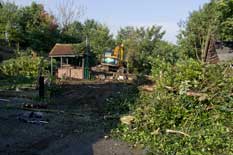 At around the same time I did take a beer while sitting outside the Eardley Arms at the top of the hill but the regulars made it pretty clear I shouldn’t be there.

Unsurprisingly I didn’t notice the closure of the Leather Bottle, it must have been around a year ago.

Recently I have been asked several times if I knew what was going on there so I diverted early last Thursday morning on my way elsewhere by car. Parents parking outside the nearby school was a sight to behold, but that is another story.

My presence with a camera drew the instant attention of the contractor on site. I wouldn’t say he was unfriendly but definitely suspicious.

He didn’t know what was going to happen to the pub but somehow knew the facade was to be preserved. His job, he said, was just to clear the trees.

So I am none the wiser about Ye Olde Leather Bottle and Bexley’s Planning Portal is no help either. The last planning application for the pub was in 2008.