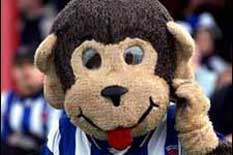 One reason for launching this website 18 months ago was a badly run consultation by Bexley council so it is not inappropriate that my short history of Bexley straining credibility should examine another sham consultation, albeit a rather more important one. The 2009 consultation on whether Bexley council should have a Mayor elected by residents and ‘separate’ cabinet or the present system of councillors who elect a leader (who selects the cabinet) and Mayor. The former allows an elected Mayor to be independent and non-political, the current system, given party politics, never could. So an elected Mayor is not likely to be popular among local politicians. Residents however may see an advantage. Hartlepool Football Club’s mascot (he dresses as a monkey) was made Mayor of that town in 2002 and has topped every reselection poll since.

The most recent Mayoral consultation in Bexley took place in 2009. Well not really a consultation as we shall see. The Bexleyheath Chronicle ran its own poll and found that 85% of respondents fancied the idea of an elected Mayor. Bexley council ran a poll via the Bexley Magazine delivered to every household, put out adverts on its own advertising sites and asked the News Shopper to make a big front page splash of the Mayor proposals as part of its quest for true democracy. You believe it? Then you’ve not been paying attention. Of course they didn’t, they did none of that. They put a short notice in the public announcements section of the News Shopper and hid an on-line poll on its website. At the end of it they said that 99 people had taken part, 81 of them on-line and 81 of the 99 in favour of the status quo - and the council had got what it wanted.

Linda Piper, Chief Reporter for the News Shopper summed it up rather nicely in her headline of 11th November 2009. “Poor response to online vote but council is satisfied.” Do I detect a note of sarcasm there?

Mr. Barnbrook who has been instrumental in unseating dishonest MPs and is not usually unaware of council activities knew nothing of the consultation until he read the News Shopper headline and was not best pleased by it. He made a Freedom of Information (FOI) request about the consultation but was refused by the council saying personal details could not be disclosed. On appeal it was agreed he could have a note of all the 99 responses with personal information redacted, but he received only 32, all from the on-line lists. His request for the whole set was ignored.

I have the 32 responses before me now. Four made at one minute intervals on 8th September 2009 are word for word identical. Suspicious that. The redacted answers aren’t marked as to which Mayoral option they are voting for. Is “Less costly”, “Only way forward”, “Less corrupt” a vote for or against an elected Mayor?

Mr. Barnbrook complained that the on-line poll was too easily fiddled and had not been advertised except as a short legal announcement in one local newspaper that isn’t distributed to every address as the Bexley Magazine is. He got nowhere with his complaint of course, the council had got what it wanted on the strength of 99 votes and maintained that was a pretty good result. However along the way the following facts tumbled out of the correspondence.

The council said that responders’ personal information was deliberately not requested for the consultation. So why was the FOI request turned down on 16th January 2010 because of “Personal Information”?

There was no check on whether non-residents could vote on-line but a check was made for duplicate IP addresses. Technically that is easily circumvented and in any case the four identically worded responses in four minutes suggests the check didn’t work - or the council’s claim was not truthful.

I can’t help but wonder if the reason Mr. Barnbrook only got hold of 32 of the 81 on-line responses and none of those received in other forms has something to do with the number of Conservative councillors. The numbers match quite closely and there was certainly no check against 49 councillors swinging the vote; or a lesser number voting several times.

A complaint of maladministration was made to the Local Government Ombudsman but it was rejected on the grounds that everyone in the borough had been adversely affected by Bexley council’s actions and LGO rules allow them to investigate only if the individual complainant is disadvantaged. The whole system is contrived to permit widespread malpractice as will be seen when Bexley’s Standards Board comes in for examination - maybe tomorrow.