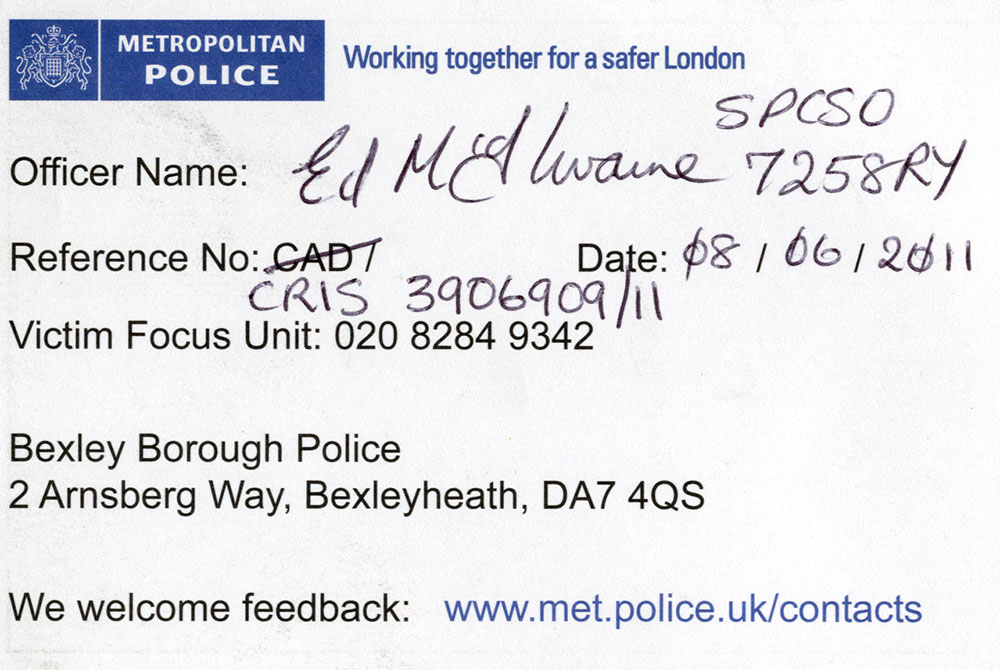 As many of you were keen to tell me at the beginning of the week, the obscene blog which I believe could only be Bexley council inspired has disappeared from view. It is still on line bearing my name but the content has been removed. I didn’t know because I last looked at it on 1st June so thank you for the many tip-offs.

The fact that the blog had been been augmented with more nonsense on 1st June changed my attitude to it because clearly it wasn’t some one-off demented idiocy by a close associate of Bexley council, it was likely to carry on. A few minutes before it shut last Friday afternoon, I delivered a letter by hand to Bexley council’s Contact Centre in the expectation it would be on the Chief Executive’s desk on Monday morning. It said…

It has come to my attention that my visit to the Civic Centre with Mr. Elwyn Bryant on 20th May 2011 which was known only to Mr. Loynes and one of his junior colleagues was put on the web in the form of a Google ‘blogspot’ in my name within hours of my departure.

In a similar vein my entry to the Cinema car park with Mr. Nicholas Dowling where we would be totally unknown except to councillors or council officers was also placed on the web.

The blog could only have been posted by someone with intimate knowledge of Bexley council who has tracked my movements.

The blog is lewd in the extreme and is presumably an attempt to harass me at a personal level. I demand an immediate investigation and response.

As you will know from reading this blog, Bexley’s Chief Executive is one of the country’s top managers rewarded with a salary package approaching a quarter of a million pounds a year and council leader Teresa O’Neill has said that he represents “good value for money”. Naturally he flew into action on hearing of such a serious crime apparently conducted under his nose. He phoned me immediately, apologised profusely, assured me he would do everything in his power to identify the culprit and have the offensive material posted in my name removed just as soon as he possibly could. He then emailed every one of Bexley council’s 63 councillors and told them in no uncertain terms that if they knew anything at all about the offensive blog they were to close it down immediately. You would expect nothing else of such a superb exponent of the professionalism of local authority management.

Unfortunately none of that is true; well maybe the emailing of 63 councillors bears some resemblance to the truth for as we all now know, the blog was removed within hours of Mr. Tuckley receiving my letter. There has been absolutely zero personal response to my suggestion that a very serious offence had been committed by a council member or member of staff. I therefore decided the time had come to take the advice of literally everyone who I had spoken to about the incident and go to the police.

Yesterday the formal complaint was drawn up by my legal advisor and I took the package to Bexleyheath police station, accompanied by Mr. Elwyn Bryant. Elwyn you will remember was also accused by the blogger of disgusting acts on council premises. A police officer soon agreed that I had provided evidence of a crime however he seemed rather reluctant to take action against Bexley council. He said anyone at all might have accessed Mr. Loynes’s diary and therefore there were too many suspects for an investigation to be practical. It seemed like an excuse that might be used against almost any crime report and I responded in a suitable manner to that and other similar theoretical obstacles to progress. At one time I had to ask if the officer could think of any scenario, however far fetched, that someone at Bexley council was not responsible for the offensive blog and he accepted that he could not. Eventually Elwyn and I were left alone for a very long time while senior officers were consulted. After that everything was plain sailing. My file was taken as evidence that a crime had been committed and bundled up for the attention of the Chief Inspector.

At the end of our time in the police interview room Elwyn and I were asked for our address. “You live together?” “No”, said I. “Elwyn lives with his wife”. It shows how the blogger was successfully propagating his views and needs to be identified and prosecuted.

Although I have in the interests of comparative brevity detailed mainly my own actions over this crime, Mr. Bryant took very similar actions himself and on Monday morning this week emailed his formal complaint to council leader Teresa O’Neill. He included an extract from the council inspired blog to illustrate his complaint. The council leader replied with a brief acknowledgement that she could not respond to his “offensive” email. So the council agrees with everyone else. Their blog was highly offensive.

It remains to be seen what the police will do next. Since the news broke late last night I have already received worrying information about the effectiveness of the named Chief Inspector. We may yet see an interesting contrast with the council being able to put me under threat of arrest, seemingly on a whim, for blogging facts the council finds embarrassing. Nothing I have ever posted is anywhere near being comparable to what has been blogged about Elwyn and me. Perhaps we are about to see if council credit card spending on lunch for police commanders is money well spent or whether the police are willing to apply the law equally to all.

Apologies for a rushed blog, I have to assist in the blowing out of 91 candles. Tomorrow things should begin to revert to normal.