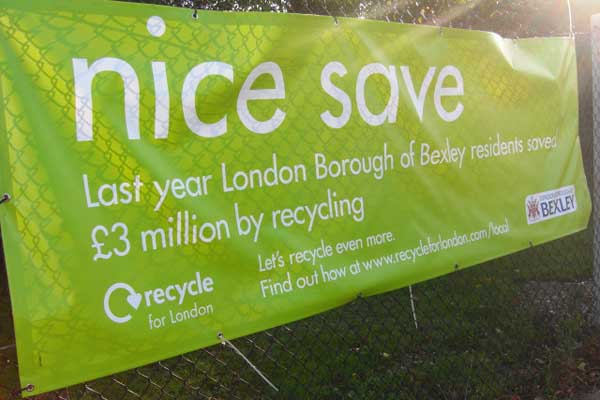 When leader Teresa O’Neill told us she had given Bexley one of the lowest council tax rates in Outer London it wasn’t true. We are 24th worst on a list of 32 London boroughs. When Bexley council restricted questions at meetings and claimed to be still among the most welcoming it was totally without foundation, by any reasonable measure we are not even in the top 50%. If councillor Craske says anything at all it’s odds on it’s a lie and when he claims his parking charges are cheapest in South East London and all three surrounding towns are cheaper we fear for his sanity, but fortunately there is one area of activity where Bexley council really shines. It is indisputably, undeniably, absolutely, unambiguously London’s top borough for recycling. Everybody says so, so it must be true.

But beneath the surface the statistics are not so clear cut, we are far from being worst, but if we are top dog there is an element of statistical fluke about it.

Harrow is the top recycler of compost and Kingston, Bromley, Hillingdon, Sutton, Kensington and Chelsea, Harrow and Richmond all beat Bexley at ‘dry waste’ - paper, tins, plastic and glass. Bexley wobbles around the first and second place because it generates far more waste per capita than other boroughs (30th worst out of 32) which is nothing to be proud of. Bexley tops no single recycling category but because of the way things are calculated it benefits from being 30th worst in terms of the total rubbish produced. The arithmetic is perverse. Be prepared to be confused.

All the figures for the whole of London are available on line and the principal statistics are summarised here on Bonkers. The official statistics divide recycled waste into two categories, the dry stuff - tins, paper, glass, plastic - and the wet stuff. The compost bin. Where does Bexley stand?

Top for dry recycling is the City of London, but we don’t usually count the City as a London borough so we won't start now. Bexley must be next on the list? No, afraid not. Kingston, Bromley, Hillingdon, Sutton, Kensington and Chelsea, Harrow and Richmond all manage to jostle Bexley away from the top spot.

Composting in Bexley is undeniably a good service; weekly and free and a decent sized bin. Some councils charge by the bag. Some boroughs are not well blessed with houses with gardens and compost cannot possibly be such a large component of their total collections. When it comes to total composting Bexley has a built in advantage and makes the most of it by offering a good service. So good in fact that when people from outside the borough visit me it is not unknown for them to dump their compost on me. It all helps push Bexley up to the No. 3 spot for total tonnage of rubbish collected per capita which is arguably not a good place to be; but as so much of that is compost and therefore recyclable it certainly does the statistics no harm. Despite that we are still not No. 1 for compost recycling, that accolade goes to Harrow.

So Bexley is No. 8 for dry recycling and No. 2 for compost and Harrow is No. 6 for dry and No. 1 for compost. Bexley is beaten on both counts. Only because we are producing more rubbish overall than other boroughs and the compost is such a high proportion does Bexley just manage to gain top spot. Poor old Harrow doesn’t produce a lot of rubbish (21 out of 32) so it loses out to Bexley because of the way the figures are weighted by total tonnage. Harrow should learn to manufacture more rubbish if they want to be top of the list. It’s because Bexley is so bad at cutting down on rubbish production that we finish up being at No. 1.

Bexley offers a good refuse collection service but all its figures are flat-lining while other boroughs are on the up. If it wants to stay top the easy way is to take in more compost from outside the borough, it will cost us more but keep Bexley in the top spot. Madness but true.

On the poster that heads this page Bexley council is currently claiming to have saved £3 million on its recycling budget but that is disingenuous. Their 2010-11 budget statement says £15 million went on Refuse Collection, Recycling and Disposal. It was much the same the previous year and next year it looks like being £16 million. The costs are not changing dramatically and neither is the income from flogging recyclables. That is static at around three quarters of a million a year. The budget is not reducing so we are not saving anything. We are only making a saving if you compare the situation now with having done absolutely nothing since the landfill tax was introduced in 1996. That would be absolutely mad and no local authority has been that stupid.

On the web where Bexley also boasts about that £3 million saving they additionally claim “It costs nearly £85 to dispose of a tonne of waste… Last year, with your help, the London Borough of Bexley saved an amazing £3 million by recycling waste instead of sending it for disposal”.

If you check out all the statistics at the CapitalWasteFacts website you will see that each of Bexley’s 223,300 residents produce an average of 447 kilogrammes of rubbish every year and almost exactly half of it is recycled. From that you can work out how much would have gone to landfill last year if Bexley had been stupid enough to ignore the landfill tax. The monetary saving is easily calculated from current landfill tax rate (which is not £85). That is I believe where the claimed £3 million saving comes from; but it is no more money in the bank than the thousands I have saved from not going out boozing every day. It is in fact, like so much of Bexley’s accounting, all smoke and mirrors. It’s not new money in the bank and it is certainly not making a contribution to Bexley’s projected Strategy 2014 savings. In the sense that it is designed to fool the population, it is yet another Bexley lie.