Wednesday’s council meeting went on for three whole hours, but note I haven’t said dragged on, because it was rather fun in much the same way that a visit to the Chimp House at a zoo or a circus can be fun.

Bexley councillors, or to be more precise, Conservative councillors, put on a pretty horrendous show of grandstanding, dodging questions and being very nasty to the Labour members and whenever they could, belittling the Ukippers.

However I am first going to stray into dangerous territory. I was born into a church going family and not being a natural rebel I took that life on board and accepted it. I have no objections whatever to the mayor inviting his appointed chaplain Joe Hogarth to council meetings to pray for councillors; by God they need it.

However on Wednesday the Reverend Hogarth tried to turn the meeting into a Christian church service. Isn’t asking everyone to recite The Lord’s Prayer going way way over the top? Surely at a public council meeting where people from every background and creed should feel comfortable and welcome, it is wrong on far too many levels? It has always been my understanding that The Lord’s Prayer is a Christian message. Didn't both Matthew and Luke record it in their gospels?

A lot of people don’t think we should have prayers before council meetings at all; I don’t hold strong views either way but in my opinion it should not become a quasi-church service and should remain free of denominational bias. In any event a chaplain incapable of finding suitable words for the occasion and who falls back on The Lord’s Prayer must be failing in his job. 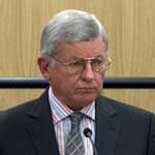 There were only three public questions from Bexley’s 280,000 souls and all of them came from people who at one time or another had stood in elections in Bexley. First was Mick Barnbrook who, following the depraved goings on in Rotherham and elsewhere, wanted to be sure we were clear of such problems here in Bexley. “How many complaints have been received in the last four years and how many have been referred to the Metropolitan Police for criminal investigation?”

The cabinet member for Children’s Services gave a fairly fulsome answer although as Mick couldn’t hear what councillor Read was saying (he confirmed that to me later) it was impossible for him to formulate a good supplementary question on the hoof, so he had prepared one earlier.

After a quick reminder of the death of Rhys Lawrie in Erith, a young boy known to but inadequately safeguarded by Bexley council under the deputy directorship of Sheila Murphy, Mr. Barnbrook asked…

Does the Cabinet Member agree that the choice of Mr. Paterson in these circumstances was a bad error of judgment and on that basis, bearing in mind the criticism heaped on Bexley Children's Care Services in recent years, he should ask the Council to conduct another Serious Case Review under a different leadership into the untimely death of Rhys Lawrie in order to protect the integrity and independence of any such review?

Mr. Patterson had authored the Serious Case Review following Rhys Lawrie’s death and probably you don’t remember but following a tip off from within Bexley council I looked into Mr. Patterson’s background and found that he had been a Bexley council employee until not long before his selection to write the review. The blog of 19th November last year refers. It would be entirely typical of Bexley council that when they have failed a child so emphatically that they should pull a stunt like that.

The same informant was of the opinion that the Bexley deputy director retains her job because she is on particularly good terms with the council leader. I have no idea whether that is true or not but the informant provided his reasons for so thinking. If it proves nothing else, it demonstrates that back stabbing is alive and well at Bexley council.

Anyway back to the question; councillor Philip Read was most indignant. 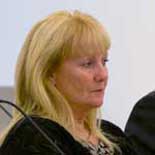 “I am not going to get involved in discussing the smear that Mr. Barnbrook has just made against one of our officers, what I will say is that no I don’t agree with him. The particular incident of which he is referring about was investigated, somebody was prosecuted and somebody was found guilty of that murder and more than that I am not going to say.”

Having accused Mr. Barnbrook of smear tactics Philip Read who knows a thing or two about smearing continued by smearing Mr. Barnbrook. “Specially not to someone who has stood up at a public meeting on a platform with someone called Nick Griffin and said how honoured he was to be on that public platform with him”.

How Mick Barnbrook was supposed to have smeared Mrs. Murphy I do not know, perhaps it is only in the minds of guilty parties. If Mick was smearing anyone it was Rory Patterson and whoever appointed him. Maybe the previous occupant of Philip Read’s position who was so keen to make an exit last May.

It’s a good job that Mick Barnbrook didn’t hear what Read said or he may have been treated to more words from him.

Mick knows it was a mistake to join the BNP thinking he could clean it up but it was the foremost anti-Europe party at the time, its principal attraction, and it wasn’t all that long before Mick reported Nick Griffin to the police along with several MPs, some of whom spent time behind bars as a result.

While Mick Barnbrook was the party’s Law and Order Spokesman he called for a Public Inquiry into the grooming of children in Rotherham and whilst the mainstream media would rather it was forgotten about, Nick Griffin was prosecuted for racial hatred after voicing his concerns about Pakistani gangs abusing girls. The police force that prosecuted him were as we now know otherwise engaged in turning a blind eye.

According to the BBC’s report at the time, the then chancellor Gordon Brown thought that Griffin’s acquittal for speaking about what is now known to be Gordon’s party’s shame merited a tightening of the law - so that they could get Griffin next time presumably.

Mick Barnbrook is concerned about child welfare and spends a great deal of time and money nurturing a young black boy with behavioural problems. Councillor Philip Read is more interested in protecting a council officer than giving an opinion on a Serious Case Review of dubious merit.

As has been reported before, Mick Barnbrook was sports mentor to Stephen Lawrence and was involved in family support following his murder. In 1997 he was co-opted by the Bexley Police Commander’s father to assist him in a Lawrence related enquiry. Mick may have mistakenly joined the BNP but he was drummed out of it for campaigning against the corruption he found there. Personally I’d feel very uncomfortable if I had ever been tempted into BNP membership even if I had campaigned for children’s rights from within but I couldn’t live with the thought that I might have failed in my job to the extent that children had died. Maybe that is why people like Read are so touchy on the subject.

Mick has already asked Bexley council under FOI for their standing order which allows a councillor to refuse to answer a resident’s question on the grounds that he was once a member of a legally constituted political party that Read doesn’t like. Read will be lucky to escape a formal complaint too. Presumably if one is made the lying chairman of the Standards Committee will Forgive Him His Trespasses and Deliver Him From The Evil That Is Mick Barnbrook.

Having gone off on that tangent there is no space or time left today for the remainder of council question time. If I can drag myself away from various chores tomorrow there may be more Chapter and Verse on questions both planted and genuine soon.

Note: Mr. Barnbrook’s supplementary question quoted above is taken from his pre-prepared note and may not be exactly as it was delivered. Any differences will be insignificant.