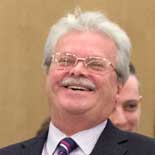 On November 5th last year Michael Barnbrook was told by cabinet member Philip Read that he was not going to answer Mick’s question to council because he had once stood alongside Nick Griffin when it was the only high profile party for those who believed that getting out of the EU was the country’s top priority. Mick’s association with the BNP came to a sticky end after they discovered that he had reported Griffin to the police for a variety of financial irregularities. Ironically someone who tried to bring down the BNP from the inside is now barred from joining UKIP.

However all that is a digression; the fact is that councillor Philip Read was desperate to dodge Michael’s question because it was about Bexley council’s shame at allowing a three year old (Rhys Lawrie) to be murdered under their nose in spite of reports from concerned medical staff and school teachers. In those circumstances any excuse will do.

• After the murder Bexley council wrote a report which appeared to be incorrectly dated to mask their neglect.
• The police were prevailed upon to state death by natural causes despite the boy having suffered 39 separate injuries.
• When many months later Bexley police could not hold their natural causes line any longer a 16 year old lad who suffered from educational problems was prevailed upon to take the rap.
• The paramedics who said that the boy was not at the murder scene when they were called to the lifeless body but only arrived later were not allowed to be witnesses at the subsequent trial.
• There were various stories involving school release times and bus timetables that strongly supported the paramedic’s statement.
• The police allowed the mother to enter her own house - the murder scene - and scrub it clean from top to bottom overnight.
• The mother should have been suspected because she was on the record - but not apparently Bexley council’s - as admitting she was liable to harm the child and had been sectioned before moving to Erith.
• To have charged the mother would have exposed Bexley council’s failures at a time when Haringey and Baby Peter was still making headlines.

Of the eight points above six are facts one can read in various reports and the other two are easily deduced from those papers and the case is still rattling around various courts and agencies while the grandfather pursues his quest for justice.

Meanwhile Mick Barnbrook put a modified version of his original question to the council for their next meeting on 15th July. Unsurprisingly it was rejected again but it did come with a lengthy explanation from Will Tuckley. Lengthy but not comprehensive, a lot went unanswered.

Bexley council regards the suppression of Mick’s probing to be so important to its reputation that it has published a rebuttal to his unanswered question on its website.

Mick of course is not put off by such things, he has called his colleagues and advisers to a meeting to discuss his plan to report a senior officer at Bexley council to the police for perverting justice. His case will I imagine be based on the fact that the Serious Case Review was not truly independent.

The case is riddled with inconsistencies; below is one not previously published. The police discovered a reference to an Initial Assessment among Bexley’s files, the council that claimed not to know about Rhys Lawrie. The Social Worker whose name appeared on it couldn’t remember either Rhys or his family. Very conveniently Bexley’s police didn’t think that its existence blew a pretty big hole in Bexley council’s defence.