19 November (Part 2) - It’s official. The Cabinet member for Regeneration and Growth is an ignoramus 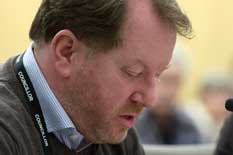 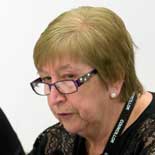 After Alan Deadman (Labour leader) declined the OBE’s invitation to deliver an alternative budget she shifted her attention to UKIP leader Chris Beazley who was ready to play her game.

He acknowledged the applause and no doubt felt rather pleased with his contribution; but not for long. Biffa Bailey landed her sarcastic knock out blow. 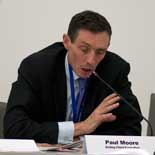 While Teresa O’Neill OBE (Oldfarm Birdlife Exterminator) relished the moment and moved rapidly on, councillor Beazley was busy writing notes and slipping them around the room.

It took just over 15 minutes for his scribbling to take effect.

To my surprise, maybe I hadn’t been paying close enough attention, Acting Chief Executive Paul Moore flicked his microphone switch. He hesitantly beat around the bush, but got to his point eventually.

Bexley council does own both shopping centres. He wasn’t keen on selling them but one point stood out clearly. Chris Beazley is more worthy of his £9,418 a year than Bailey is her £22,615.

The odd thing was that Bailey’s ignorance was not remarked upon in any shape or form. Councillor Deadman was wise not to take the leader’s bait. Even if he had come up with a decent proposal it would have been instantly dismissed.