12 August - Another collection of oddments

The Crown v Councillor Cheryl Bacon
It’s a year since the police presented their case against Councillor Cheryl Bacon and her friends for lying on a massive scale while in Public Office and the Crown Prosecution Service has been sitting on the file ever since. Mick Barnbrook made enquiries three weeks ago as a result of which he has been told that everyone there is on leave until the second week in September.

You’d think if the CPS thought there was no case to answer they’d have said so ages ago. Maybe that is not so easy when the evidence stacked against Bacon and Co. is so very strong.

Index to related blogs and documents.

Houses in Multiple Occupation
Fresh from his skirting around the truth in this week’s News Shopper, Cabinet Member Brad Smith has decided on licensing all HMOs and issued a Press Release. If you are looking for early relief from the worst sort of HMOs, forget it. If it happens it will be more than a year away. 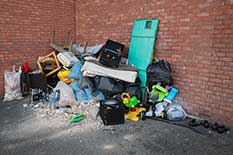 Cabinet Member Don Massey is proud of Bexley when showing people around. Does he ever get around Bexley any more or is he familiar only with the A2 to Rochester?

The pile of rubbish shown here does not exist as far as Bexley Council is concerned, it’s on private property so it won’t be included in the stats.

The unqualified man
Mr. Barnbrook has challenged Bexley Council about their refusal to say what qualifications their Head of Legal, Akin Alabi might have which the professional bodies don’t know about. His letter put forward various scenarios…

A. He has obtained his appointment as Head of Legal Services of Bexley Council by means of forged documentation.
B. He has orally misrepresented himself to the Council’s Appointments Committee as being either a qualified solicitor or a qualified barrister, when that is not the case.
C. He has been appointed as Head of Legal Services in a different name from the one he used to obtain his professional qualification as a solicitor or barrister.
D. The Council is knowingly and deliberately refusing to supply the information I have requested in the knowledge that it might implicate members of the Appointments Committee in a Criminal Conspiracy or Misconduct in Public Office.

If he had any qualifications they would be freely available from either the Law Society or the Bar Council but neither know him.

Bexley Council once again failed to come to Alabi’s defence and is prepared only to say “I am entirely satisfied that Mr. Alabi is appropriately qualified and experienced and meets the requirements of the role but is entitled to have his personal information protected”. That statement comes from Director of Finance Alison Griffin proving that when it comes to a cover up all the senior officers will swiftly go into mutual self preservation mode. 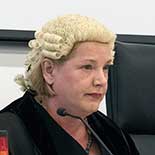 Bexley Council’s job description for their Head of Legal says that being either a qualified Solicitor or Barrister is an essential requirement of the job.

The apology for a Chief Executive Gill Steward has also lost no time in protecting Mr. Alabi. She has decreed that Mr. John Watson who was the first to discover that Mr. Alabi’s qualifications, whatever they may be, did not appear to meet Bexley Council’s minimum requirement cannot email his concerns to the Council in future. “I am arranging for your e mail address and any other e mails addresses (sic) that you might create to be blocked.”

Using the ‘vexatious’ rules is what Bexley Council always does when it has lost the argument.

Gill Steward is most definitely a loser.

I have yet to discover the attraction of Facebook but there can be little doubt that it is a very popular social media platform. Those who use it to follow the local scene may be interested to learn that there is now a group which celebrates Joseph Bazalgette’s sewer, or more accurately the public footpath that sits astride it.

The Ridgeway runs from the Crossness pumping station to Plumstead. The group follows in the footsteps of The Greenway which is its twin on the other side of the River.

It could have been 1001
Bexley Council is bragging that there are now 1,000 Neighbourhood Watch Coordinators in the borough. I wonder how accurate the statistics are. My road is plastered with Neighbourhood Watch signs and has been for ten or fifteen years, but there has never been an active watch here.

Last year I was persuaded to take on the role - as if there wasn’t enough to do already - but I was rejected when it was discovered I ran Bexley is Bonkers.