As you will have noticed, BiB has been taking a bit of an enforced holiday. With in effect two houses to run and just me to do it, occasionally the number of outstanding jobs becomes overwhelming and I am not sufficiently well organised these days to cope.

Fortunately Bexley Council is in the middle of its two month recess and Conservative Councillors (more accurately their official Twitter accounts) have been issuing only medium sized lies which can be ignored. It’s what they do, get used to it.

Today was a bit of a day off from playing domestic catch up because it was the day to see off my old mate Peter Gussman. 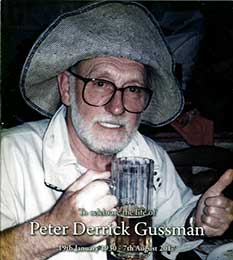 I first met him in 2010 when I attended my first Council meeting. Back then he was a regular and one of the gang which sat in amazed silence while Councillor Cheryl Bacon attempted to prevent the recording of a Scrutiny meeting she chaired.

Peter was one of nine people who made written statements to the police when Bacon indulged in the biggest bout of Councillor lying I have ever witnessed in order to excuse the relatively insignificant error she made on the night in question.

Peter was something of a character. Thrown out of his home by cruel parents when only 14 years old, he at first ran a sea food bar but two years later was shovelling coal between Blighty and the Far East on a merchant ship before transferring his skills to the footplate of British Rail steam locomotives.

Following that he took up lorry driving and his tales of life in that profession before the coming of the Drink Driving Laws are probably best left unrepeated.

Peter has not been in good health over the last couple of years and his last attendance at a Council meeting was probably the best part of a year ago. However when he felt up to it he would join his Council agitating friends for a drink, usually coffee, after being warned off of anything stronger by the medics.

Elwyn Bryant sometimes says the reason why police complaints against Councillors and their protectors are strung out for years on end - one has passed its sixth birthday - is because they are waiting for us all to die off.

At nearly 74 I am the youngest of Bexley’s high profile Council watchers. Maybe Elwyn is right.