1 August - Read all about it

There is a good chance that I will upset all my Labour supporting friends today as well as a good few Tories, but as long as one in particular isn’t happy, it has to be good.

I currently find some of the things Labour Party officials nationally are saying to be absolutely reprehensible and find it difficult to understand how so many people who I know to be very decent individuals can remain members. I suppose they do so to fight from the inside; although not all do. My daughter’s partner phoned this afternoon to update me on his pursuit of the corrupt police officers who are implicated in the murder of his brother, but more to the point, he has resigned his membership of the Labour Party.

Reprehensible people do of course exist in all walks of life which brings me to Councillor Philip Read’s recent Twitterings.

He has been goading Councillor Daniel Francis into condemning the anti-Semitic Peter Willsman and for some reason Daniel has not yet clearly done so. I suppose, just as I do myself, he considers that it is not always worth answering every single one of Read’s allegations. He will regard it as encouragement and take his juvenile argument to the next step.

However Councillor Read will never be able to take the high ground and win such a debate outright because he and his ilk have a history. A history steeped in hypocrisy. 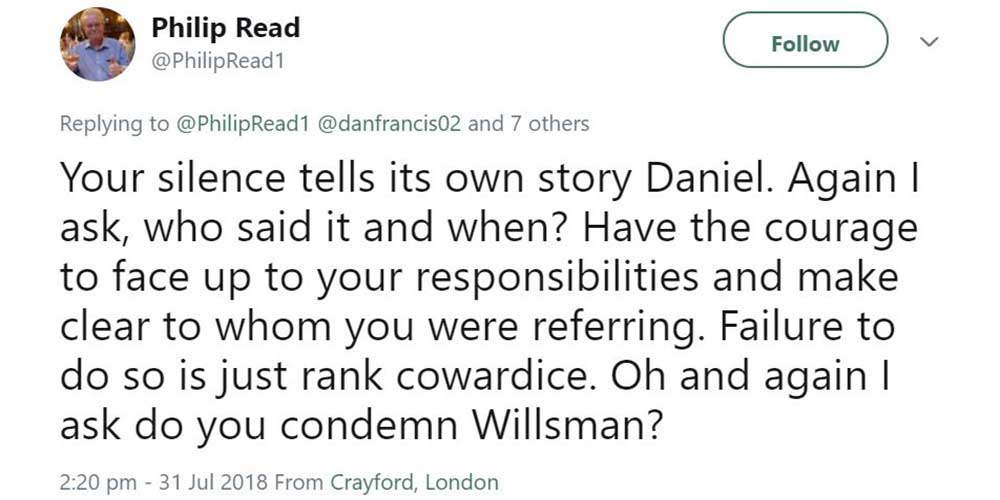 It has been reported here before that Daniel has been on the receiving end of some choice language from Bexley’s Tories. Not to put too fine a point on it he was called a C at a Council meeting. Now he has made discrete references to Tory Councillors who use the N word and the P word - which of several I am not sure.

Read challenged him to say who used such language. “Make clear to whom you were referring. Failure to do so is just rank cowardice.”

How ironic is that? How many times has Read and his dubious friends @bexleynews referred to ‘Labour supporters’ and a ‘sad old blogger’ who have supposedly condemned Conservative initiatives. The Belvedere Splash Park, the new Civic Offices, street trees and probably more that I have forgotten.

I have usually come to believe that the imagined Labour Supporter to be a reference to myself and I have challenged the Tories to be more specific with their identification but they never have, not once.

But we have it from the horse’s mouth that such reticence is “rank cowardice”. The Conservative allegations differ however from Daniel’s, the former, if they do indeed refer to myself, are definitely untrue whilst Councillor Francis’ accounts most probably are.

You can be absolutely certain that he didn’t make up the following little gem from the Twitter archives.

Three See You Next Tuesdays and a Dickhead plus an implied punch in the mouth for good measure.

If you have the stamina for it most of the Read/Francis Twitter exchange may be seen by clicking the first of the two Tweet images.