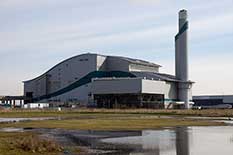 Plans are afoot to expand Cory Environmental’s rubbish incinerator in Belvedere and two weeks ago three of their bosses made a short presentation to Bexley Council.

Councillors had a copy of the presentation to browse through but members of the public were afforded no such luxury, instead they must make do with this summary of what was said.

Cory Environmental, it was William Cory and Son when my mother worked for the company in the early years of WWII, has facilities along the river from Wandsworth through to Gravesend and 95% of the waste it moves for London is river borne. (Five tugs and 53 barges.) They process 750,000 tonnes of black bag rubbish in Belvedere each year.

That rubbish generates 525,000 megawatt hours of electricity and leaves behind the byproduct of 200,000 tonnes of construction aggregates.

London as a whole produces around 4,400,000 tonnes of rubbish each year so processing facilities will have to be expanded. Currently about two million tonnes is incinerated and of the rest rather more than half goes to landfill and the remainder is exported to overseas energy facilities.

Despite that London is ranked fourth best of the major European cities for its effective processing of waste but of its eleven landfill sites nine are due for closure by 2025, hence the need for expansion in Belvedere. The new processing facility will be known as the Riverside Energy Park.

It will process another 655,000 tonnes of waste for electricity augmented by a one megawatt solar panel roof and a similar amount will come from anaerobic digestion. Excess power generation will be stored in a 20 megawatt battery. Waste heat will be available to the nearby homes that form part of Bexley’s Growth Strategy. The potential 960 megawatts (the spokesman said megawatts not megawatt hours) of electricity will reach the national grid via a link to the old Littlebrook (Dartford) power station site. The existing facility exports its power to the Barking power station but that route is already at full capacity.

“The majority of [The Environmental Impact Assessment] has come out as non-significant in ecology, drainage, historic environment, transport, noise and vibration, ground conditions and air quality”.