We are going to miss Tom Bull when he leaves the News Shopper because we went several years without having anyone in the mainstream press who was willing to poke his nose into the murkier corners of Bexley Council.

His story in today’s issue about the best part of a million pounds going into silencing Council staff who have seen what more senior people would prefer they hadn’t seen is very timely.

Not all that long ago I met a lady in a country pub whose conscience was pricking over something she had seen covered up. I have her contact details which could not possibly be mentioned here because it might put her £30,000 Bexley Council pay off in jeopardy. I refused to report on our meeting and suggested that unless her conscience was worth thirty grand she would have to live with her secret. All I will say is that the Council Leader was very directly involved.

Over the past month I have been looking into some very colourful allegations directed at Children’s Services both in Bexley and across the river in Thurrock. The common feature is the people involved, Sheila Murphy and Rory Patterson who have both been employed by both Councils. Another common feature is that children died on their watch both north and south of the Thames.

I have been thumbing through Trevor Lawrie’s files. Trevor you may remember is the grandfather of Rhys whose death in Erith was extensively reported here in 2013.

In brief Bexley Council largely ignored reports from doctors, teachers and the mother herself that Rhys was at risk. More than that he was often seen bloodied and bruised. Within 24 hours of his death from 39 separate injuries the police concluded he died from natural causes. A manslaughter charge was eventually brought nine months later but the grandfather is absolutely certain that they got the wrong man to save Bexley Council embarrassment and as my most recent file perusal suggests, the police too. 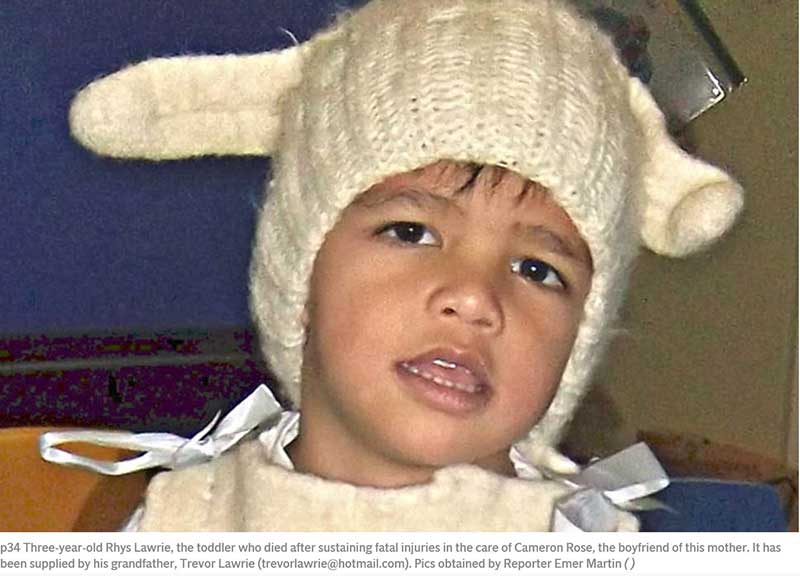 It was reported six years ago that not a single first responder was called as witness - some must have known the truth - but the latest file search show that the witness statements were quite obviously doctored. In no case I saw did the signed for number of pages correspond with the actual number of pages sometimes by a factor of three. Pages cut on some, inserted on others, all neatly typed and no signatures.

Some of those witnesses voiced their concern but to no avail. I have seen some of their complaints, all written down. It does not reflect well on the police.

The case always did look suspicious and the more one digs in the more those suspicions are aroused. I did not realise until the recent file inspection that the teachers had made several adverse reports to Bexley Council and not just the one immediately before Rhys’s sad demise. The correspondence reveals that they were seriously worried about Rhys’ situation and Bexley’s neglect.

From across the river comes the more colourful allegations. Child snatching, gagging parents and unsuccessful attempts to section those who do not take their punishment lying down. Four of those accused have Bexley connections, some current.

It seems to me that both sources of information should put their heads together as the two cases have such obvious similarities. Unfortunately one may be concerned for his continued employment and is reluctant to put too many cards on the table. The other, Trevor Lawrie, has no such inhibitions. His email address appeared on the Evening Standard’s website in 2012. It is still there. (Or click image.)

Bexley Council has issued a Press Release on Children’s Services today, I hope you will understand if I take it with a degree of scepticism.