5 January - When the letters P and O stand for Pee Off?

As you will probably know by now, Wilton Road is the location of my nearest shops and it consists of about 22 businesses which struggle to survive the onslaught of five years of disruption by construction projects and the neglect of two councils. The border between Bexley and Greenwich goes straight down the middle of the road.

However despite the nondescript nature of Wilton Road it has two stand out features. At one end is a railway station designed to be the terminus of the Elizabeth line which I once heard a senior Crossrail project manager describe as the jewel in its crown. (Obviously trying to curry favour with the inconvenienced populace but at least unlike many its counterparts further up the line it is more or less ready for use.)

At the other end is a Post Office - and what is special about that? It’s a Crown Post Office and to find another in London you will have to spend half an hour on a train and ten minutes on foot because the next nearest is at London Bridge.

Both the station and the Post Office are strictly speaking in the borough of Greenwich - the boundary lies pretty well exactly on the line of the ticket barriers and only its main entrance lies in Bexley. The Post Office lies entirely in the Royal Borough but both are very important to a large number of Bexley residents.

On 16th January the Post Office will be permanently closed and inevitably someone has plans to build flats on the site. That someone has decided to consult with residents but unlike Peabody which has similar plans for the empty site across the road they do not appear to welcome informed comment from local people. 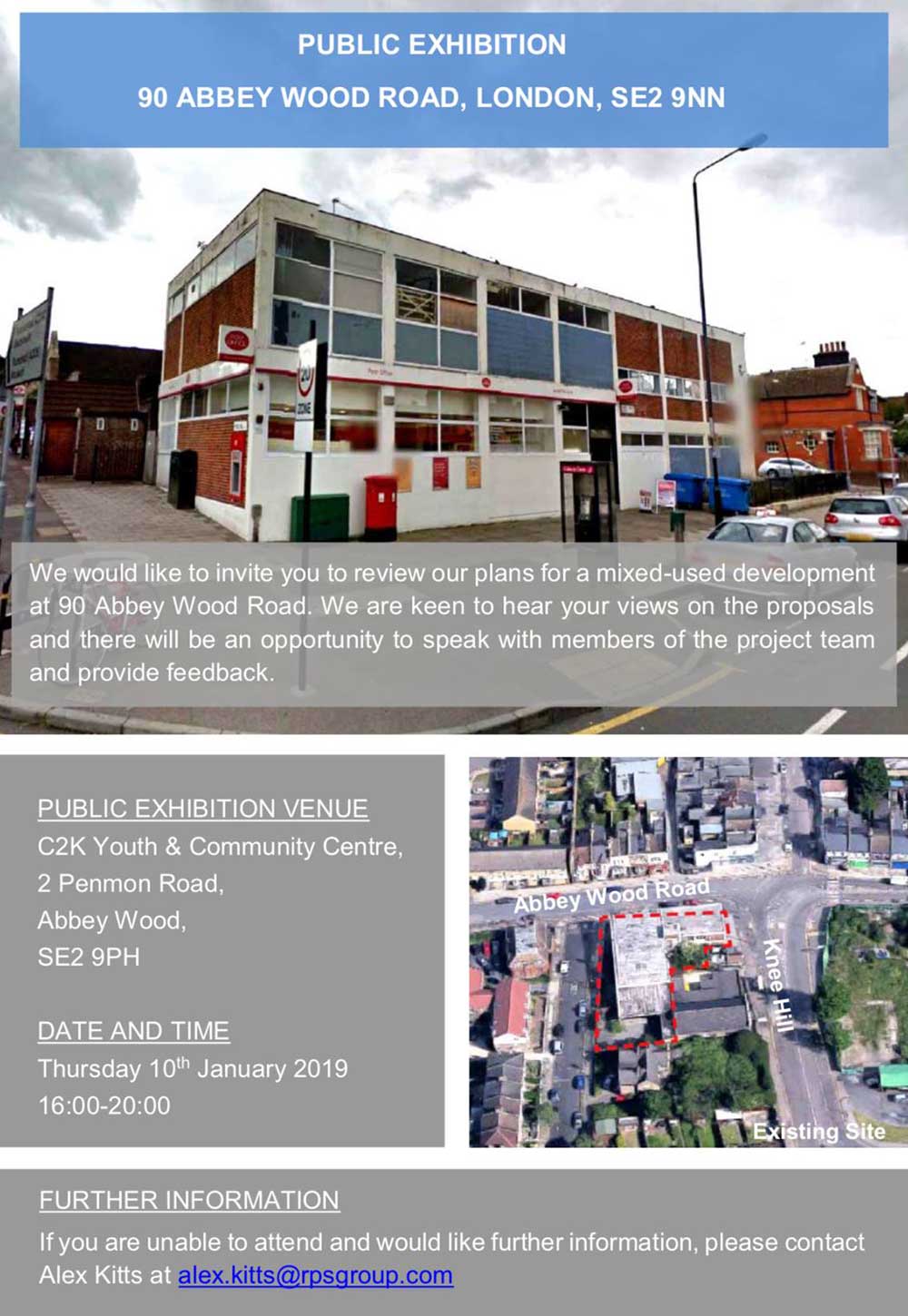 They have chosen to consult the public a mile away as the crow flies in Penmon Road, Abbey Wood. That’s twelve stops and ten minutes on a bus that runs only every 15 minutes. The 469.

As you can see from the leaflet it is open from 4 p.m. to 8 p.m. for one day only, next Thursday.

I am unable to attend that day so I hope at least one of you will make the effort and send over a few photos and any literature that might be available. If nothing else it will be interesting to see if they used the same proof reader as they did for the consultation leaflet.

One cannot help but think that consulting in a location largely unaffected by their plans is a deliberate ploy worthy of Bexley Council itself. It seems hard to believe that the Community Hall next door to the Post Office (on the left of the picture) was not available on any single day this month.

Next time I see the manager out and about I will ask her.