The plan for today was to write about how some senior Council staff play the transfer game shuffling from one well paid job to another while being paid handsome Golden Goodbyes. Generally such people are well known failures and are part of the same self-promoting clique.

Unfortunately a serious problem has arisen, some documents sent anonymously detailing the history of Bexley’s new Chief Executive Jackie Belton have simply disappeared. No idea why, I don’t delete emails and I have many folders of them going back to the last century. I have searched high and low and can only think I may have misfiled something which would certainly make it very difficult to find.

If the anonymous sender could possibly send the email again it would be much appreciated. Meanwhile let’s make the best of a less than ideal situation.

Bexley’s last Chief Executive, Gill Steward, achieved nothing very obvious and left a trail of unflattering public comment in West Sussex but more particularly in Cornwall before her arrival in Bexley but despite her chequered history and recent ejection she immediately stepped into a job in Kingston-upon-Thames. My counterpart there said she was on a daily rate of £1,000 and according to his report her predecessor in Kingston went out the door with a nice £340,000 in the back pocket.

How much did Gill Steward get for her Bexley failure? Tom Bull, the News Shopper, reporter put in an FOI but I told him he had no chance of getting an honest answer out of Bexley Council, and I was right. However he persevered and last week obtained his scoop. Ms. Steward went off with £94,000 of taxpayers’ hard earned cash in her handbag.

The new Monitoring Officer disappeared at much the same time and £54,000 better off. She had been described as “reprehensible” at an Employment Tribunal. One of the judges said her actions were racially motivated. One must wonder who is responsible for Bexley’s recruitment.

Can I top Tom’s scoop? I will try.

Steward was so divisive that there was a danger that other senior managers might resign rather than work with her. I have it on good authority that one did. Someone well known who has been with Bexley Council for a very long time and a fine upstanding citizen in his own right. If he couldn’t work with Steward then you can be sure that her management style was poor to put it in the mildest of terms. He was in very many ways an indispensible asset to Bexley Council and sure enough, once Steward had left they twisted his arm to come back - which he did. 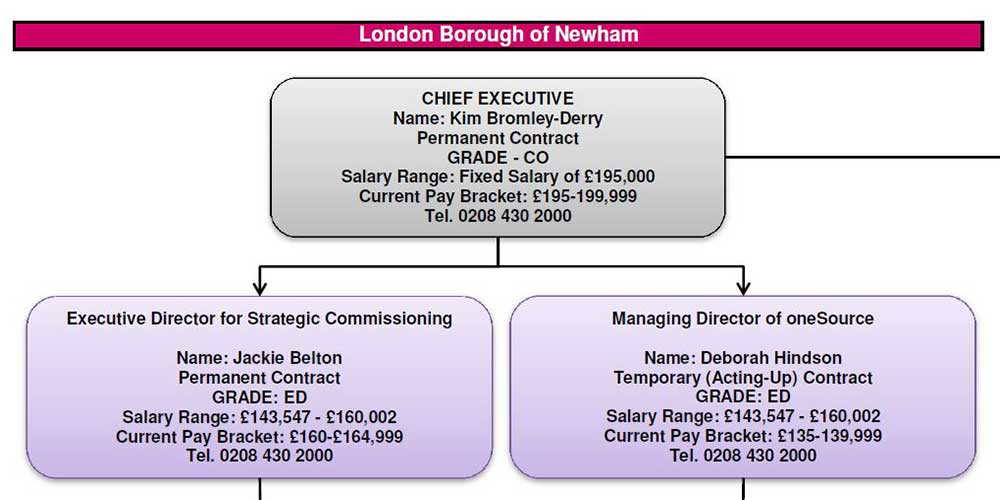 Now we have Jackie Belton who has been at both Lambeth and Newham Councils in recent years gradually climbing up the greasy pole.

As I said earlier the documents relating to her various Golden Goodbyes have been lost - for now anyway but this is what she was paid in Newham.

Bexley Council has not yet updated its website with details of their new Chief Executive but if she gets the same pay as her predecessor (£192,000) it is not enormously more than what Newham paid her for a Directorship some years ago.

Perhaps Bexley doesn’t pay as well as Newham or perhaps they will accept second raters, they certainly did back in 2016.

What the itinerant Senior Council Management is good at is doing not a lot and drawing up watertight contracts for the day they are dismissed.

None of them we have seen so far in Bexley have been worth anything like the amount of pay doled out so generously on our behalf.