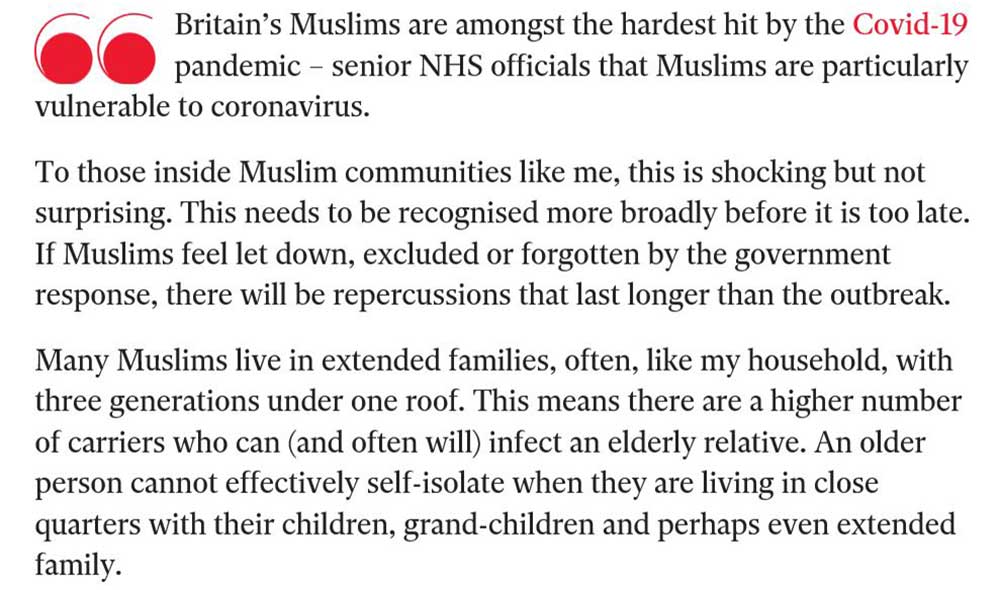 Right from the outset of this Corona pandemic it was reported that the Muslim community was suffering at a rate far in excess of what population numbers would suggest might be normal and there have been calls for an enquiry as to why that should be. I think I can save the taxpayer a lot of money.

I have had to drive to East Ham (†) rather more often than I would like in recent days, three medical emergencies, two ambulance call outs encouraged by the GP who diagnoses (wrongly) via WhatsApp videos, and yesterday the regular food and sundries delivery.

East Ham is in the borough of Newham which has the worst Covid-19 record in London. One GP has died there.

Upon arrival I noted that my aunt’s front door was wide open and at the end of the 30 inch wide hallway I found two men talking to her in barely comprehensible English. No masks, no gloves, no possibility of Social Distancing. It transpired that they were from next door where a lovely Muslim lady lived until a year ago. The new tenants had never made themselves known until yesterday.

Apparently their youngster had thrown a shoe over the back garden fence and the brain dead had thought it sensible to invade an old lady’s house, contrary to every Corona related rule, and berate her for not understanding that they needed to get into the back garden.

I keep the back door locked as a safety measure.

So these two cretins have undone six weeks of precautions over which the vulnerable old lady has seen only one carer and me, both of us taking every possible precaution. The carer has not allowed her children out of her house (she says they are too scared to go outside) and her husband is out of work and hiding in his back garden.

To prevent recurrence of the invasion I have had to use both locks on the front door which is a fire risk. Aunt can only undo one of them from inside.

The back fence is no more than four feet high and even I managed to hop over it before I removed the bolts from the front door.

† For the record I have found the roads quiet except while passing through Woolwich. Charlton, the tunnel, Canning Town and the A13 have all been, not empty, but very much less busy than usual.