29 May (Part 1) - Of journalists and other reptiles

Confession time; I have not seen even one TV news programme during lockdown. Not really surprising, I haven’t watched one for five years or more. I gave up when I came to believe that the BBC was not telling me the whole truth about anything. I briefly switched to Sky and soon came to the same conclusion about them.

The radio and Internet became my principal news sources but the last time I listened to BBC Radio 4 was the night that the Aldrich farming fellow in The Archers whose first name I have forgotten was taken to Court for polluting his land and some political activist threw an egg or something like that. Three years ago?

Since then it’s been LBC and increasingly TalkRadio for me and almost every day I have listened to the Corona Press Briefing from Downing Street, usually on LBC while getting increasingly annoyed by Eddie Mair’s idiotic interruptions.

The journalists’ questions are utterly pathetic and all too predictable and I am reminded of what my left leaning daughter with a degree in journalism once told me. The trouble with journalists especially at the BBC is that they are all far too left wing. So journalists who I feel are blinkered lefties complain that their colleagues are pretty far left. Little parasites feeding off bigger parasites. 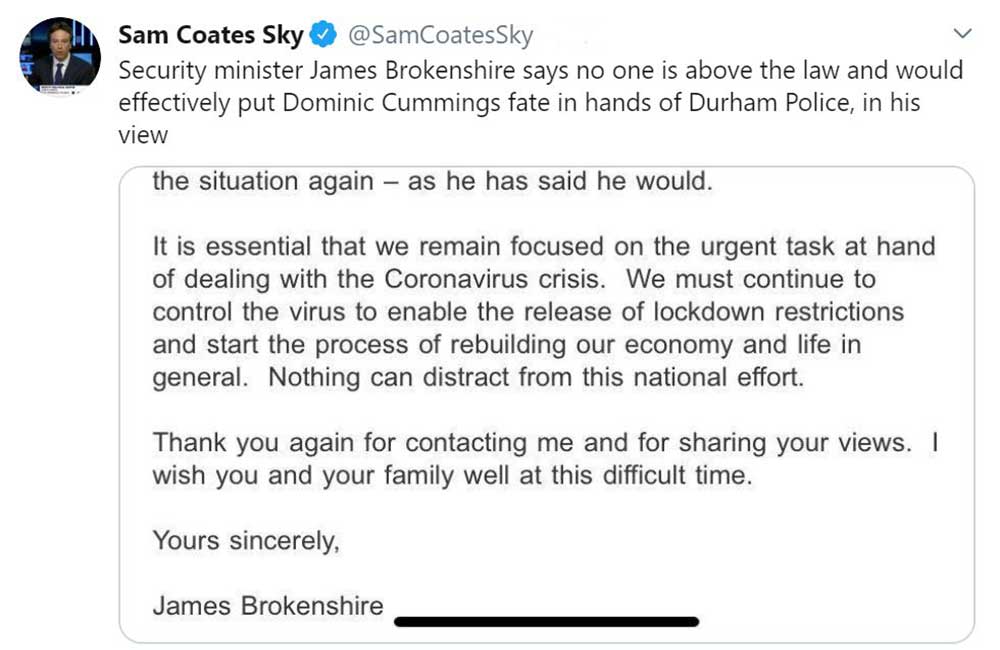 Yesterday the Sky News Political Editor thought he had some sort of scoop when he Tweeted James Brokenshire’s letter to a constituent referring to Dominic Cummings’ expedition to Durham.

James had done his usual trained lawyer thing; chosen his words carefully and sat on the fence.

I received that letter a day before Sky News and didn’t think it warranted any publicity, maybe I was wrong so here it is in full…

Thank you for contacting me about the Prime Minister’s adviser Dominic Cummings. I understand the strength of feeling that this incident has caused given the requirements to follow the public health rules to prevent the spread of the Coronavirus. I know that this has meant so many sacrifices. Given the number of emails and letters I have received and my desire to provide a response in as timely a manner as possible, I am sorry if my reply does not address all the points you highlight, but I hope it sets out my thoughts on some of the key concerns.

Dominic Cummings’ compliance with public health restrictions has been put in the spotlight following his travel and stay in the North East with his family. He has asserted that he complied with the rules given the particular family circumstances which he set out in detail in his statement. People will reach their own views on Mr Cummings’ actions and I respect your opinion that they breached the guidelines. I have underlined the strength of feeling on this issue at senior levels of Government.

During a recent media interview when I was asked about the resignation of the Government’s then scientific adviser Professor Neil Ferguson over an alleged breach of the lockdown restrictions, I said that there could not be one rule for one and one rule for everyone else. This remains my position and no-one is above the law.

Ultimately, it is for the Police to determine if there has been any breach of the law and regulations. I note that Durham Police are reported to be reviewing the facts and circumstances to consider what further action may be appropriate. In respecting the operational independence of the Police, I do not think it would be appropriate to pre-empt the outcome of any such work by calling for Mr Cummings to resign. It is right, however, that should new information come to light, the Prime Minister review the situation again – as he has said he would.

It is essential that we remain focused on the urgent task at hand of dealing with the Coronavirus crisis. We must continue to control the virus to enable the release of lockdown restrictions and start the process of rebuilding our economy and life in general. Nothing can distract from this national effort.

Thank you again for contacting me and for sharing your views. I wish you and your family well at this difficult time.

As I said before, I don’t think Dominic Cummings broke the law in any meaningful way and we now know that the police agree. His trip was mainly entirely legal but one little bit was very borderline; it may have broken the law but it might not.

If it was down to me I would charge Boris’s SPAD and all his journalist buddies for gathering in someone’s rose garden at a time when such gatherings were clearly illegal. Not that I can afford to be too judgmental; confession time again. On three occasions I have delivered fresh dandelions to a hungry tortoise.