Who makes the decisions that have got Bexley Council into financial hot water?

The Council Leader must bear a great deal of the responsibility, she (and he in the past) oversees the recruitment of the top brass who run the show.

Recently people with a track record of failure have been recruited from other London boroughs. If you go back 15 years or more to the Labour Administration, someone decided that the Thames Innovations Centre was a good idea and it bled cash until very recently. 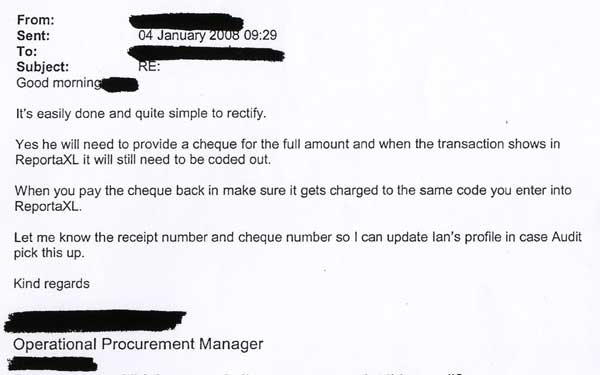 During the corruption ravaged years of the noughties the Leader himself milked the system and when he was found out and ended up in Court for a piffling amount fiddled at the GLA our present Leader refused to report him to the police for a ten times bigger fiddle perpetrated in Bexley. You can get an idea of what went on from just one email.

Cook the books and hide it from the Auditor. Those were the days!

Should anyone put their trust in such people?

Bexley Council has been, maybe still is, the seventh biggest municipal property gambler in the country. £34·2 million spent between 2016 and 2018. Not only the old Blockbuster store in Sidcup but Wickes in Erith (£8·7 million), Pier Road in Erith, Erith Post Office for £925,000, the Job Centre in Broadway, the old NHS site opposite Barnehurst station, and the now notorious Erith Distribution Centre which cost it £9·8 million.

All “to enhance economic viability for the benefit of local people”.

Going in the opposite direction the Council sold what used to be Lamorbey Baths in Sidcup for £750,000 and the new owner sold it on for £1,950,000. “Enhancing the economic viability?” A good one Bexley!

Blockbuster, with very unfortunate timing, is to become a Council Cinema and the Distribution Centre earned not a penny in rent and is now to be sold at a loss to part fund the redundancies which might save Bexley from bankruptcy.

The investment in shops doesn’t look so clever now; maybe shares in Amazon would have been a better bet.

BexleyCo has not yet sold a single house and what is this investment in Rockfire Capital all about? [Note to self, must find time to look into that.]

Who decides on these dodgy investments? It’s easy enough to blame the present crew made up of Jackie Belton (CEO), Paul Thorogood (Finance Director), David Leaf (Cabinet Member for Resources) and Teresa O’Neill (Council Leader) but the misjudgments can be traced back to well before them. BexleyCo was first mentioned here in April 2017 so both it and the sale of the Baths predate all of these people apart from the Leader herself.

It is difficult to avoid the conclusion that Bexley gets to where it is because the wrong people are recruited by the wrong people who were recruited in earlier years. Senior Councillor jobs are just a Merrygoround of back slapping, leg ups and jobs for the girls - well it is mainly girls.

Note: Some of the historical figures shown above were sourced from the 853blog.