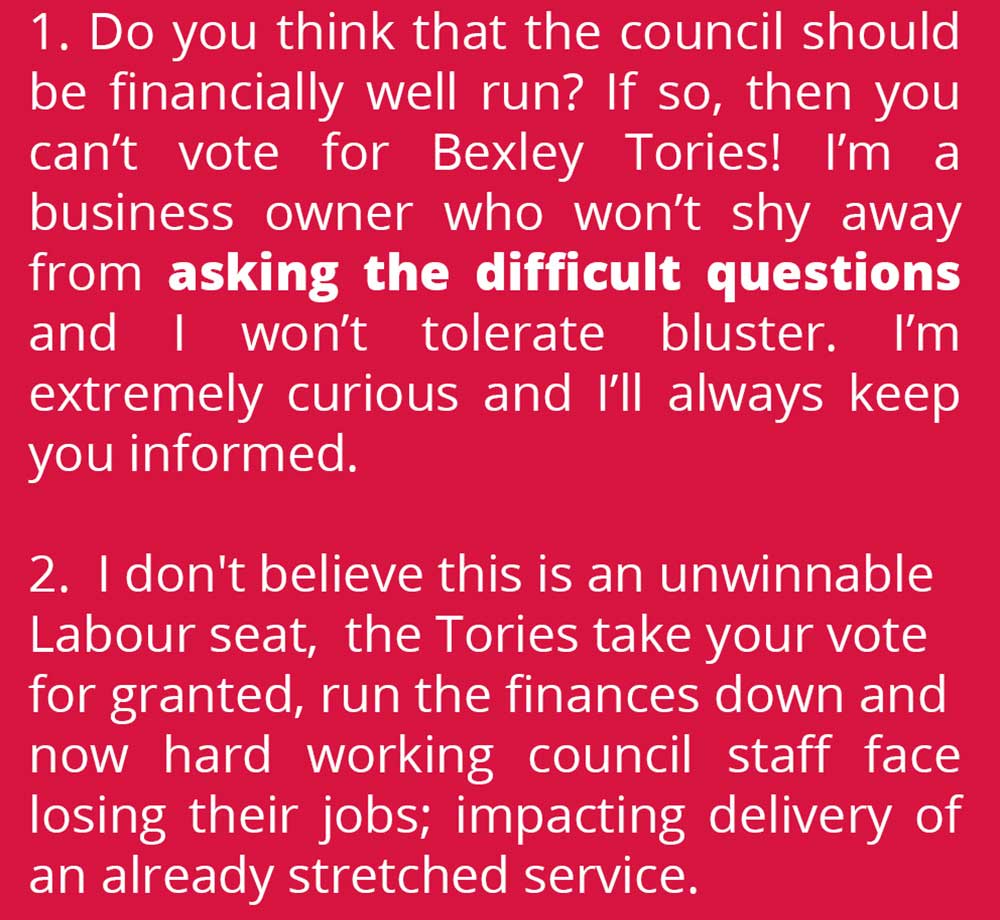 By a lucky coincidence both the Conservative and Labour leaflets for the May 6th Longlands byelection dropped into my Inbox yesterday afternoon. Maybe because the Labour one had been nicely scanned and the Tory equivalent had been photographed with a phone my immediate reaction was that the Labour one was far more eye catching. Would it stand up to more detailed analysis?

I don’t know who the Conservative candidate Lisa-Jane Moore is and she will get no criticism from me today. She is pictured with Longlands ward Councillor Andy Dourmoush who was one of the few Tories who went out of his way to speak to me back in 2014 when he was first elected. I have always found him very sociable and helpful.

At a time when Bexley Council is not doing a lot apart from raising prices, taxes and staff unemployment their scope for bragging is restricted.

They manage to favourably mention the construction of the cinema in Sidcup and an investment in new trees which always provokes a wry smile from me as I remember how Bexley Conservatives scrapped the tree planting budget after regaining power and Councillor Craske allowed new street trees only if residents sponsored the planting at £230 or whatever the charge was as recently as three years ago. (†)

Five years ago Bexley had the second worse provision of street trees in London.

Needless to say there is not a word about how Bexley came to mess up their financial affairs although there is room to remind voters of how Sadiq Khan has messed up his.

The Conservative leaflet may be seen here.

Given the parlous financial situation in which Bexley finds itself it is not surprising that Labour’s David Tingle (Parliamentary candidate for Sidcup in 2019) has been able to deliver some well aimed kicks. The £14·8 million spent dealing with the temporary housing crisis and Bexley’s rather lame if not downright dishonest attempt to blame their lack of money on Covid. The auditor said otherwise.

Mr. Tingle makes the point that an extra Labour Councillor will have no direct effect on Bexley Council but it may give the Conservatives pause for thought. Their arrogance is at times absolutely breathtaking.

The Labour leaflet may be seen here. There cannot be a lot of doubt that it is by far the better piece of graphic design but it also delivers pertinent facts in a palatable fashion - free of typos too which cannot be said of the Conservative leaflet which comes across to me as unfocussed.

There’s a lot of Tory votes to be overturned.

† Turns out my memory is still not so bad. A bit of research reveals that Bexley Council did indeed charge individual residents £230 if they wanted to plant a street tree.