The Council Leader chaired a meeting of Covid experts led by Director of Public Health Anjan Ghosh yesterday morning and she said pretty much everything in Bexley is “fantastic” which allowing for her usual hyperbole is not too far removed from the truth, Anjan was rather more specific with a whole load of statistics to present.

He said there was “a mini-spike” just before Easter. There were only 22·4 ‘cases’ per 100,000 on 22nd March (second lowest in London) but ten days later Bexley was the highest in London and remained there until “only a week ago after which it steadily dropped”. On 19th April the rate was only 15·7 and no one knows why Bexley’s figures leapt around but the largest numbers were in the 12 to 16 and 30 to 49 age groups, thought to be secondary school pupils and their parents.

There have only been 36 cases in the past seven days and only two school students are isolating. There are wards with zero cases including Slade Green which had been bad.

Close analysis of waste water etc. has given no indication of any new variants reaching Bexley, nothing like the Wandsworth and Southwark infections has been found.

Central Library was provided with 2,500 Lateral Flow self tests and they were all taken within two days.

The white population is still much more likely to be vaccinated but the gap is narrowing. The overall performance is among the best in London but Thamesmead, Belvedere, Erith, Slade Green and Falconwood are lagging and being pursued vigorously. Decliners are being approached up to three times before being recorded as such.

Councillor Brad Smith asked about the possibility of a lack of confidence in vaccines following the advice given and the action taken by foreign governments. He was told that “Bexley has been a vaccine enthusiastic borough and the rules relating to the use of particular vaccines changes almost daily” and some governments have been more risk averse. (A young friend with a history of blood clotting was refused an Oxford AZ vaccine last week and was sent to Guy’s for the Moderna.)

Councillor Smith appeared to be unimpressed by the answer and especially concerned about vaccines being made a condition of employment.

The Leader said that after 6th May virtual Council meetings will no longer be allowed and for that reason almost all Committee meetings will be cancelled until 21st June.

As things stand at present there will not be another Covid update meeting and if Councillors have to meet in the Council Chamber they will be required to take two tests in the week preceding the meeting. A way will have to be found to allow members of the public to attend.

A selection of slides presented by Dr. Ghosh. 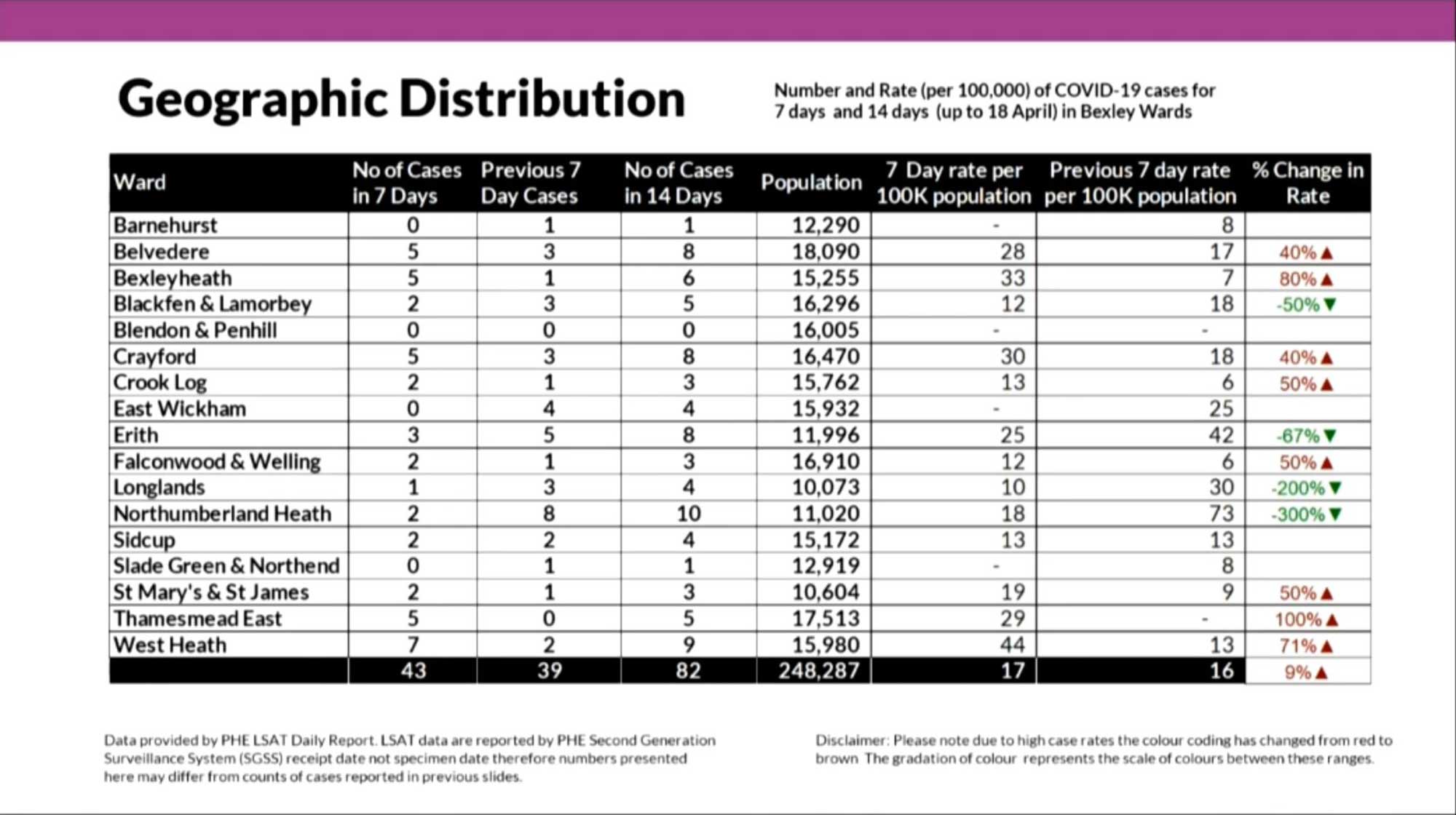 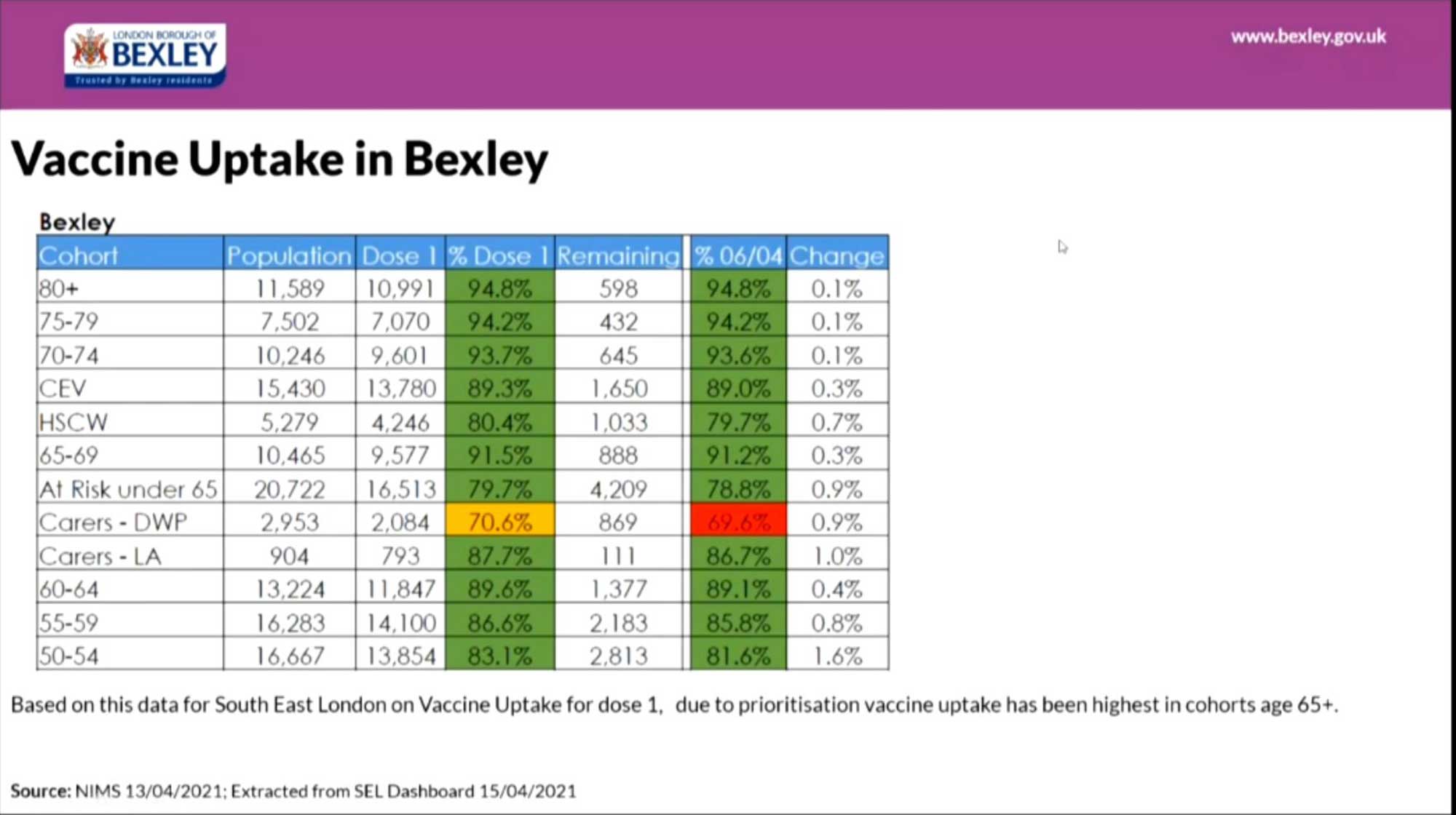 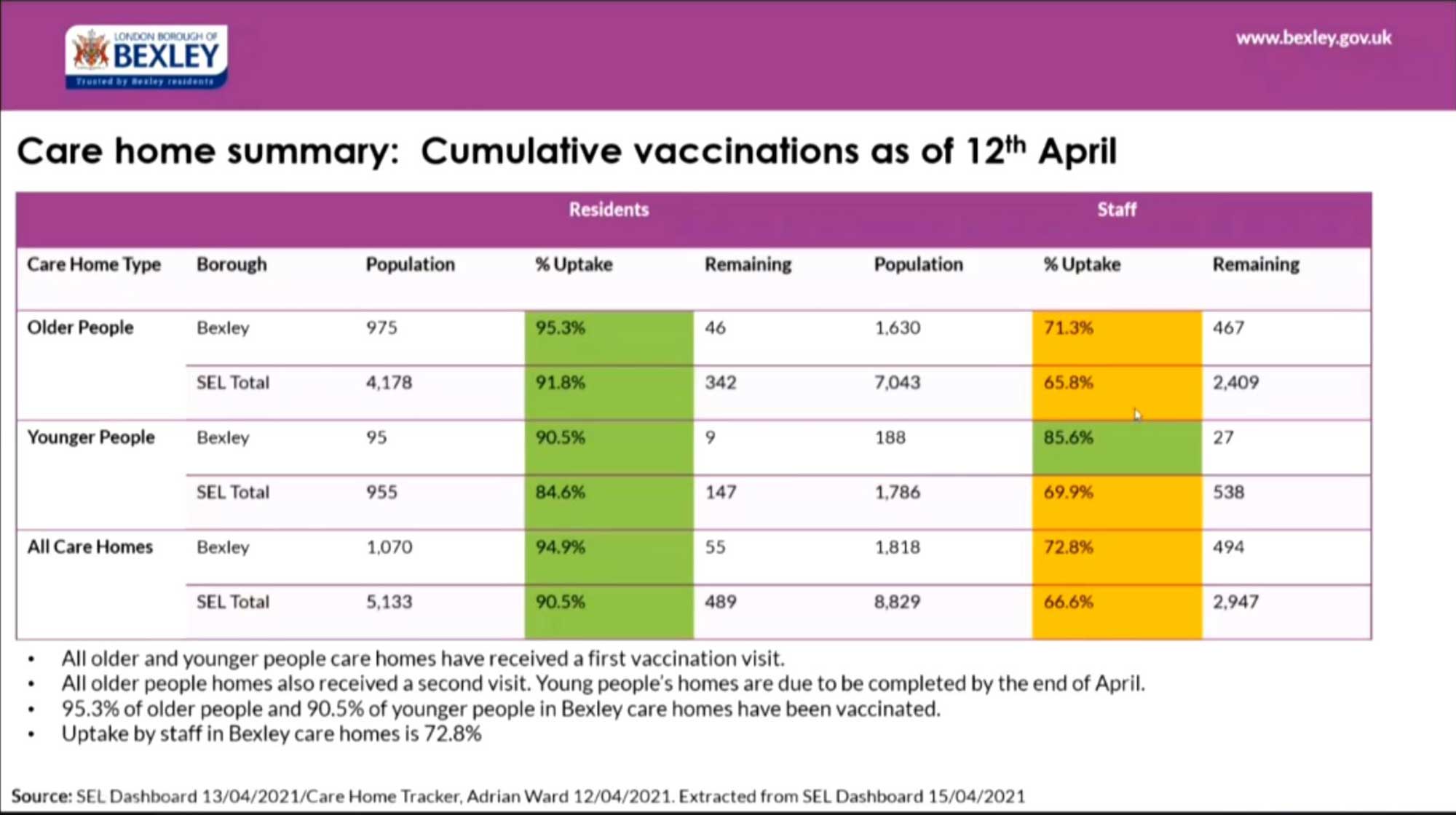 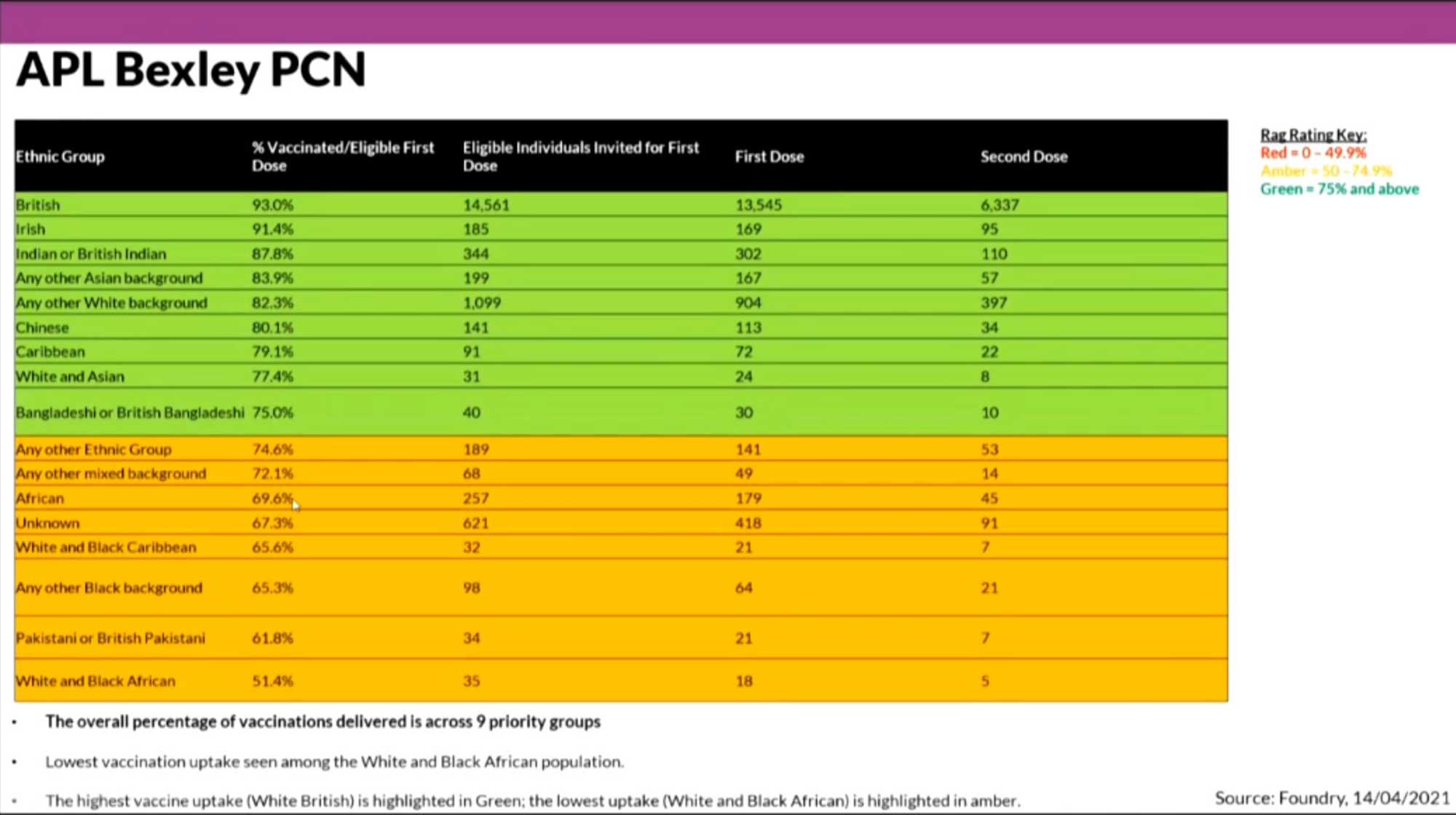 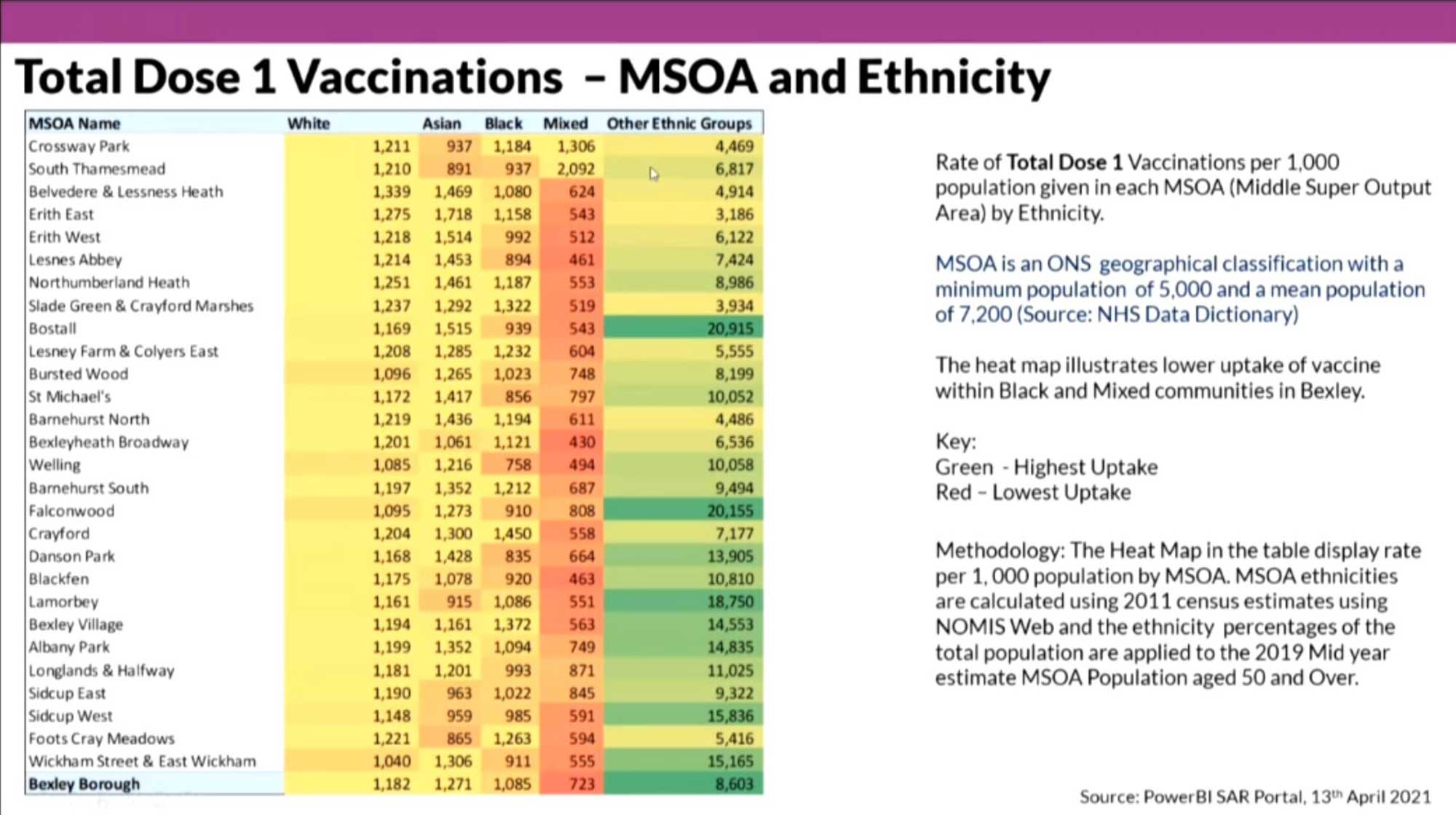 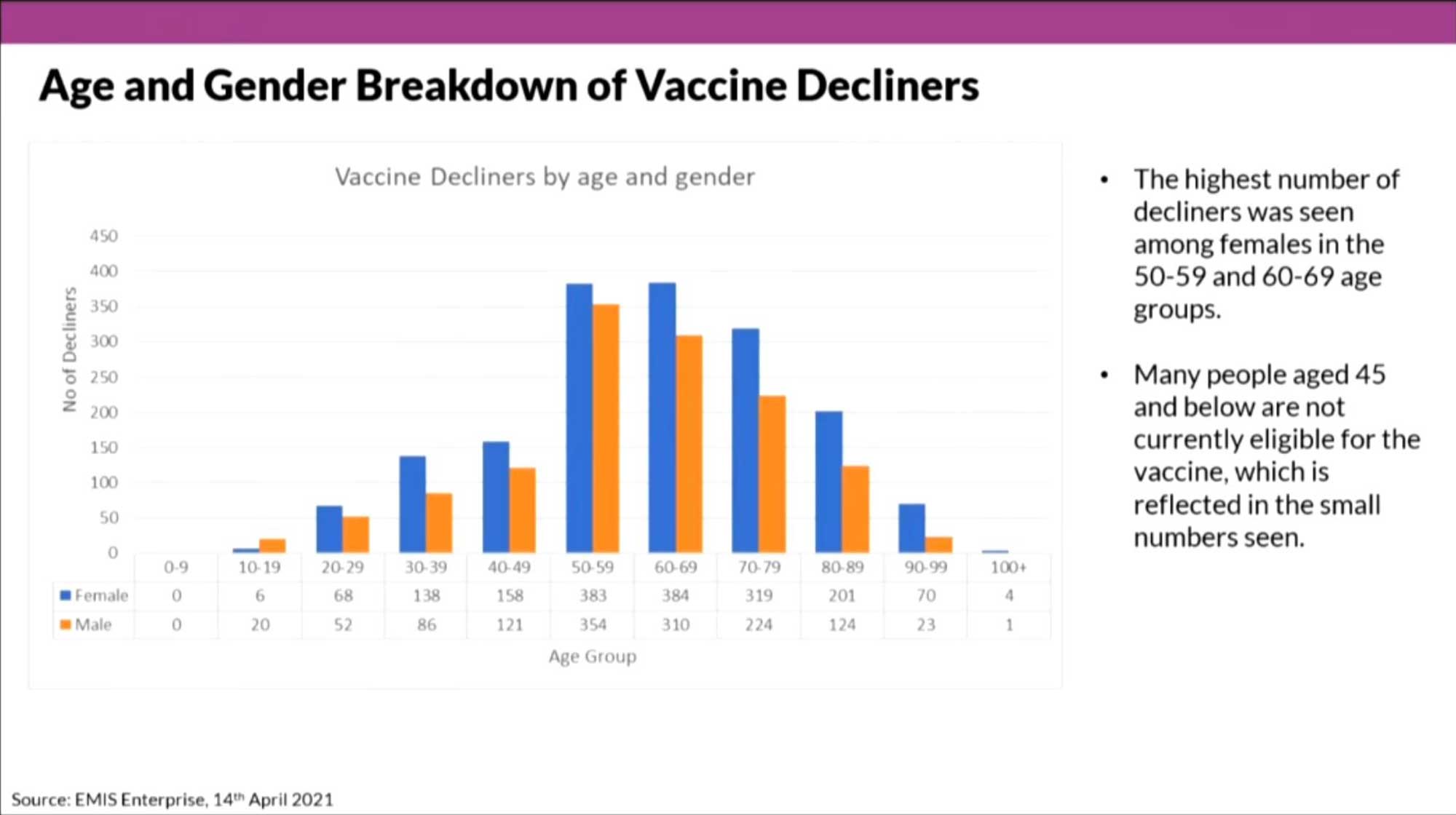