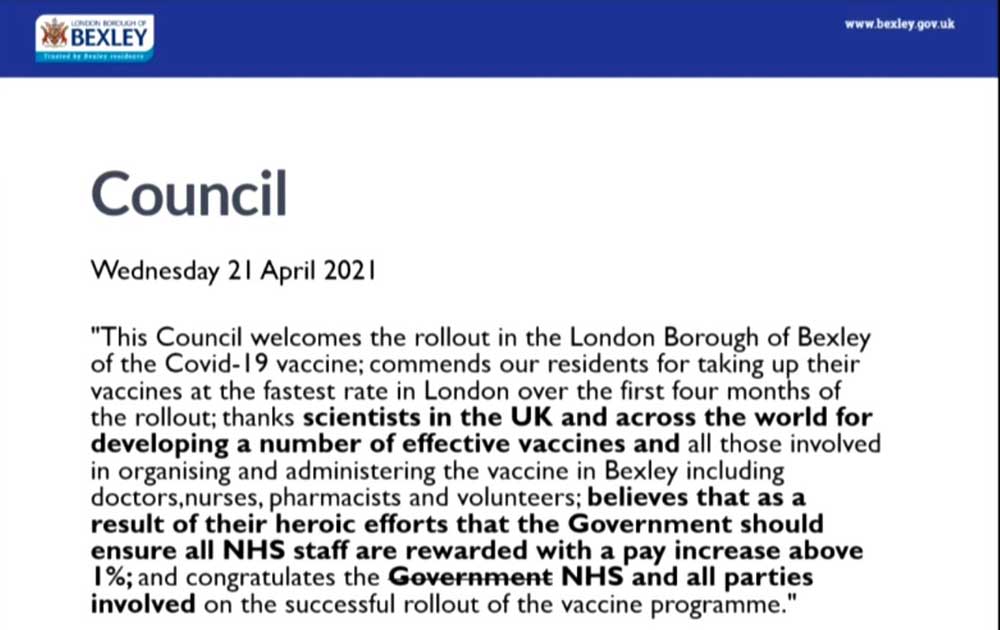 The Motion put forward by Council Leader Teresa O’Neill (shown here with the Labour amendment in bold) required Standing Orders to be amended to allow it to jump the queue of accumulated Motions. With a two thirds majority required for the change it only just passed the usual tribal voting from Labour and Conservative Councillors.

The reason for its accelerated submission was to push the vaccination programme harder although what the debate does, in the Leader’s words, “to raise awareness” is questionable given that almost no one will have been listening to the webcast; but nothing new in that.

Maybe this blog will do her a small favour.

Labour Leader Councillor Francis (Belvedere) thought that suspending Standing Orders set a bad precedent and it would be better to amend them if they were found to be inadequate or unsatisfactory. He was ignored.

The Leader said that the “vaccines are an amazing story” and praised the volunteers and the “absolute champion residents”. As top London vaccination borough a contingent from the Cabinet Office had visited this week to learn from Bexley’s “success story”.

“The GPs had been fantastic” (†) however some areas and some occupations had shown reluctance and that must be addressed.

The Labour Group put forward an amendment which politicised the Motion which would have been a red rag to the proverbial bull in Tory Bexley. Did they really think an innocuous Motion could be changed to one going against O’Neill’s Lord and Master in Downing Street?

Councillor Francis reeled off a long list of local Covid statistics, both good and bad, and thanked everyone from vaccine scientists to vaccination volunteers but majored on the NHS staff who had been in the front line.

Councillor Nicola Taylor (Labour, Erith) seconded the Amendment, concentrating on the Government’s many mistakes, “the pay cut” for NHS staff and skirting around the Government’s alleged contract corruption. All the usual statistics like 150,000 Covid deaths were trotted out; it was not the way to win friends in Tory ranks.

However none of it cut any ice with Leader Teresa O’Neill who lost no time in confirming what everyone has always suspected. Conservative Councillors in Bexley are not permitted Independent thought.

Without a moment’s hesitation she said “We wonְ’t be accepting the amendment”. Like me she regretted that her Motion had been turned into “a political football” and ended with an emphatic “we will be voting against the Amendment”.

The Leader speaks for everyone.

It is exactly what happened. Labour Members abstained.

† I could tell you a different story.