The bin pictured on the left went unemptied for about a month and was then reported to Bexley Council. They said it had been contaminated, there was no obvious sign of it but it has been in the past so it probably was.

Bexley Council took it away a week ago with the inevitable result that the paper and cardboard was put into the adjacent plastics bin and contaminated it instead. Meanwhile dumped paper and polystyrene is redistributed by wind or wildlife and left to despoil neighbouring gardens. Mine included and far more than shown here.

Good old Norman is back 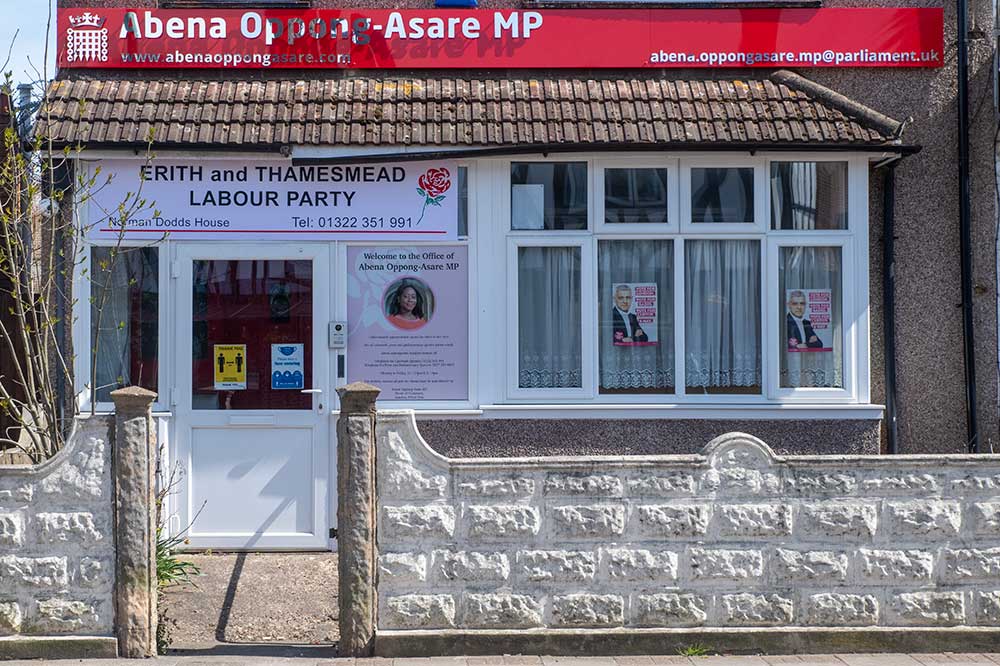 A fairly large helping of Humble Pie is required here because the Labour HQ photographed ‘sans Norman Dodds’ last Thursday evening did not last long. It has been restored to its former glory - and more.

My only excuse is that I didn’t really write either of the two blogs on the subject, I merely enclosed two readers’ submissions within a narrative shell.

Both came from Labour supporters who acted independently as far as I can tell. Different names using different email addresses on different days.

Maybe that speaks volumes for what Bexley Labour is like beneath the surface; although looking towards Downing Street one might say every political party. Whatever the case apologies are due. Abena still stands behind her illustrious predecessor Norman.

It’s a pity that I know no more of my MP than any other average Joe. 18 months into her Parliamentary career the previous Member for Erith & Thamesmead exchanged 239 emails with me, most apolitical it is true but from her successor none. Hence my ignorance.

A long time Bonkers reader has given his age away in the following interesting childhood recollection of Norman Dodds MP.

My memory of Norman Dodds was of a visit by a group of school pupils to the Houses of Parliament (I can’t have been more than 14).

He came down to show us round having just picked up his post. After greeting us, he asked whether any of us collected stamps; I just wish I had said I did. I was what might be called a casual collector, having a stamp album and having occasional spurts of buying stamps.

He then gave the envelopes complete with stamps - some from abroad, one was Malta or Gibraltar that I can remember - to someone who spoke up.

No need to do that, we weren’t voters.

Showing pupils round the House of Commons is nothing exceptional but there were no airs and graces, he seemed like a genuinely nice man, who was warmly acknowledged and spoken to by a number of people who appeared to have different roles in the House (judged by dress/age/gender etc. - I guess it was the 1964-1965 school year).

As far as I know he acted like a gentleman throughout his Parliamentary career. He is complimented in Margaret Thatcher’s autobiography. She said he was “a genuine and extremely chivalrous socialist of the old school”. He was willing to stand up for ‘unpopular’ causes he thought to be right - for instance, travellers. [See below.]

His death was a big blow to his constituents. His successor Wellbeloved was a poor replacement. I met him once and went home disappointed.

Whether the present incumbent will be mentioned in (at least) two past Prime Minister’s (auto) biographies, I am far from certain.

This says as much about our Prime Ministers as it does about our MPs. I would be surprised if MPs figure prominently and positively in Blair, Cameron and Johnson’s autobiographies (I haven’t read the former two). Major’s quite possibly (with the exception of the b@$t@rd$). May; possibly; unsure about Brown.

I should add that the image of 315 Bexley Road as it is now is, I am afraid, rather similar to a great many other constituency offices now. I’m not sure why it can’t be called Norman Dodds House, that is mention of a person, not a political party?

My only other recollection is not first hand. There was an election meeting at the grammar school (my old school) at which George Brown spoke. It may well have been for the 1964 election as all my class had to research that election and I amassed an awful lot of material from the various parties. Much would have been Labour as my mother knew people in the party, including Councillor Powrie, who, amazingly, I found details about on the internet.

Another who put others first.

My grandfather worked at the Arsenal and he lived close by which is, presumably, how we knew him. I seem to remember that it was open to all (not 13 year olds though).

Then politicians were scrutinised by voters not by a cosy chat on the sofa with Philip and Holly. I’ve found a reference to his work with travellers in the 1960s and 1970s. it was not popular locally but I get the impression that Norman Dodds did what he thought was right.

My contributor goes on to discuss the state of politics in Kent with reference to names once familiar in Bexley. He apologises for “ranting” about them but speaking from experience I know he is absolutely correct. Dishonesty transcends County boundaries.

The end of the road
Most of my money goes on supporting family and I might be described as shopaphobic. Probably I will win no friends by saying I spend almost no money locally, however a couple of years ago I simply had to buy a new bed and Hamseys in Broadway were selling well known brands at less than internet prices. As a result I have been on their mailing list for a little while.

On Saturday they wrote to tell me they were closing down permanently, a Covid victim according to their letter. So that’ll be another Broadway restaurant coming soon then.

“OUR BEXLEYHEATH STORE IS CLOSING DOWN FOREVER”

The end of road travel?
I drank my first (2021) small can of beer yesterday after a 77 minute journey to Chingford. I left a couple of minutes after one for the 15 to 20 minute journey to Blackwall Tunnel and it took 53 minutes. All due to Socialist lunatics in Greenwich and County Hall. LTNs and a closed ‘motorway’ slip road displacing traffic on to reduced width tracks running alongside a little used bus lane.

My son who earns a living studying such things for Government agencies and Departments told me once how much money traffic hold ups cost the country. I have forgotten what the horrendous figure was but when did the economy and pollution worry a genuine blinkered Socialist?