27 April - Seeking equality for all. Digging out the data

Three months ago Councillor Howard Jackson (Conservative, Barnehurst) bravely summed up his (with Councillors Diment, Gower and Newton) investigation into racial inequality in Bexley and was none too popular among a few of his colleagues for being just a bit too honest. Nevertheless he succeeded in his push for a Sub-Group to be assembled to continue his good work. It met last Thursday and was chaired by Councillor Caroline Newton. 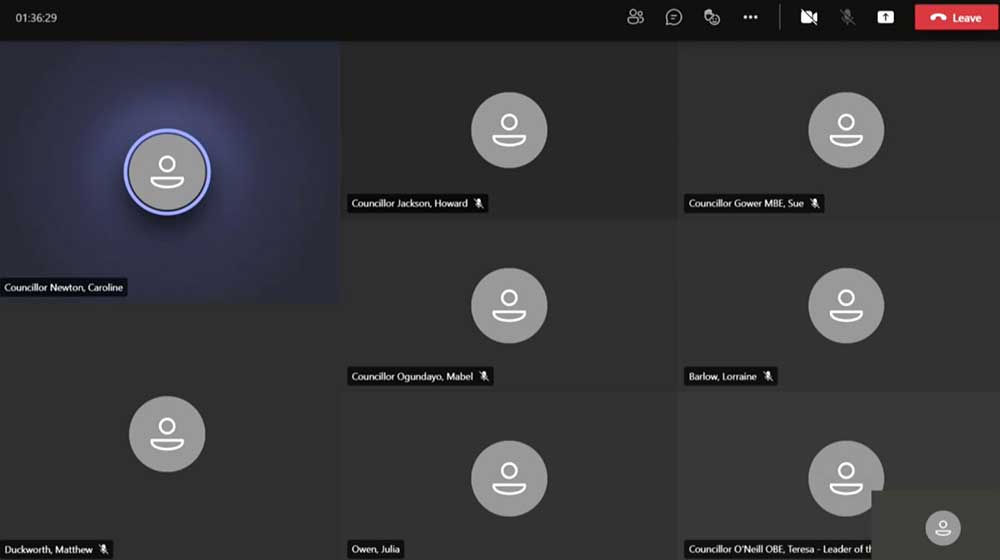 There were inevitable references to the North of the borough which has the reputation of being ethnically diverse from which may spring a number of misconceptions. Having lived close to Thamesmead for 34 years I can vouch for the fact that the population looks very different to what I see when visiting family in rural areas and a little more unruly at times.

An obsession with counting things has led me to believe that bus services are most popular with black people and that picnickers in Lesnes Abbey Park are more often than not speaking Eastern European languages but in my limited experience, almost entirely confined to the daylight hours, the rare acts of violence and shoplifting seen are all perpetrated by white people whilst the silliest examples of idiotic driving are by young men.

It is all anecdotal, the only blatant racist behaviour I saw close up came from a Sikh woman, and it will be good if Bexley Council can discover what really goes on beyond a single and possibly biased gaze.

The meeting began with some facts and figures from Council Officer Julia Owen and some of her slides are reproduced below.

• Bexley has gone from low to high diversity levels in a short space of time and it is focused on the North of the borough.
• BAME residents are younger than the borough average with lower employment rates.
• BAME pupils generally achieve better exam grades than their white counterparts but not “black Caribbean pupils or those of mixed white black heritage”.
• Thamesmead East residents are better qualified than the rest of the borough but more likely to be deprived. (Possibly due to youthfulness.)
• Diversity and higher crime rates appear to go hand in hand.
• BAME children are under-represented in social care services when very young which reverses with age.
• BAME people are 40% of the homeless.
•Covid testing has shown fewer cases among Africans. 6% of positive cases from 12% of all tests. They and other ethnicities have the lowest rate of vaccinations.
• BAME residents are disproportionately represented on the Serious Violence Prevention Panel and in Domestic Abuse cases.
• Black (not BAME) suffered more Stop and Search but produced no more arrests than any other group. Lower grade offences by BAME people are more likely to go to Court.

Councillor Howard Jackson said (like me) he didn’t like the term BAME and asked for an alternative to be found. Mrs. Owen said that the term is definitely falling out of favour and the London Councils Working Group appears to be favouring Black Asian and Multi-Ethnic (BAME!) The Chairman asked that the Sub-Group tries to use very specific descriptions of population groupings to avoid misunderstandings.

Councillor Teresa O’Neill (Conservative, Crook Log) was a little concerned that some of the source data went back as far as 2006. Census data being ten years old has been a problem as has drawing it from a multitude of sources observing different data rules. “Are we discussing a Bexley that no longer exists” the Leader not unreasonably asked.

Councillor Gower (Conservative, Bexleyheath) said that children coming into the borough for education may skew the borough statistics. The Council Officer suggested she had plans to remedy that.

The meeting went on to hear that the economically inactive (not looking for work) are predominately UK born but with ethic origins. Immigrants tend to come in with jobs pre-arranged.

Additional resources are being made available for tackling Domestic Violence among those from “ethnic backgrounds”. Poor language skills can be a problem for victims.

Bexley Council is looking into racial inequalities within its own workforce. “Should senior staff be a little bit different?” There is a much higher BAME churn rate among Council employees. There were references to Unconscious Bias training. 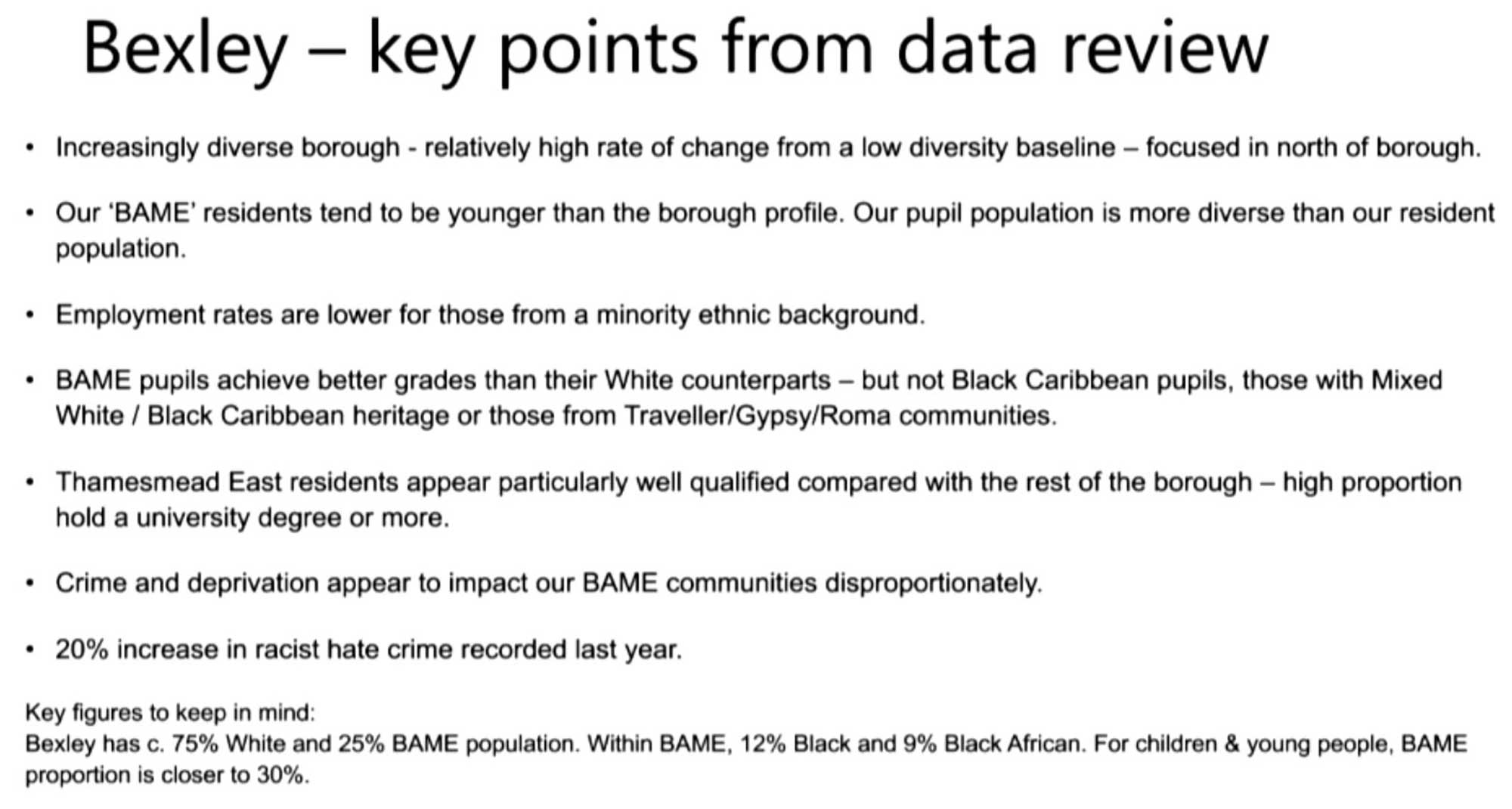 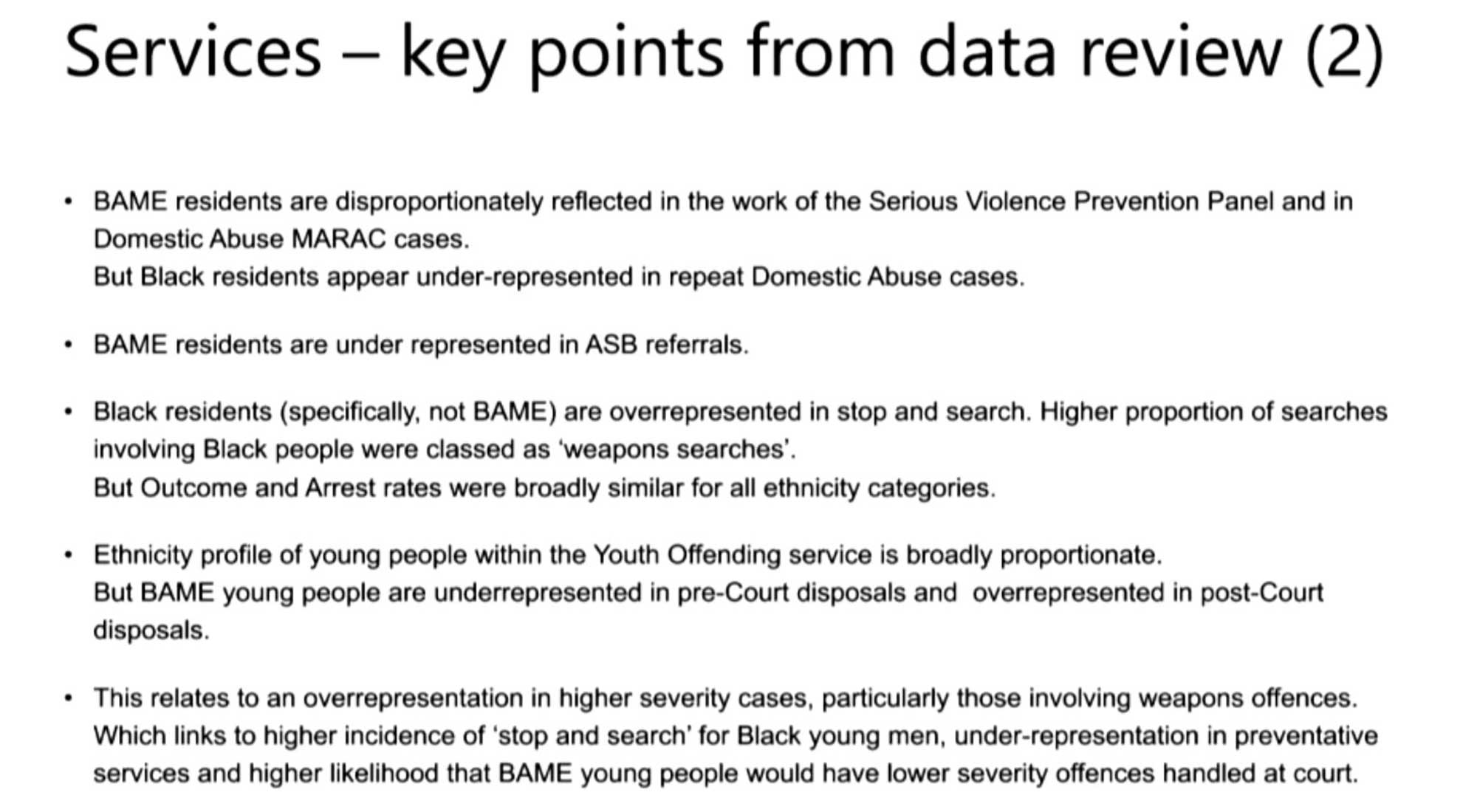