Here we go again, another day with nothing to do but gardening and thinking about getting an eye test. I seem to have fallen out with all of the opticians. A local independent swindled me out of £300, Boots; walked out after being ignored in the waiting room for 50 minutes and discovering that a lady in the queue had been there for three hours. Specsavers impossible to get hold of on the phone and Covid obsessive at their front door. Maybe all opticians are poor. A friend used an independent in Orpington who refused to issue a prescription on the grounds that he might use it to buy glasses elsewhere. Their minimum charge was £700. That’s been illegal since 1989.

I always feel the mainstay of Bonkers has to be Council meeting reports. We haven’t really got a local newspaper any more and the best you can expect from it is Council Press Releases which will always be biased. However there is going to be a shortage of such reports because Bexley Council is cutting down on the number of meetings. Not their fault, it is down to the idiots in Number 10 who have managed to get almost everything Covid related hopelessly wrong.

Councils webcasting all their normally public meetings has been an absolute boon during the 12 month lockdown. It’s not a perfect solution but it allowed easy access to the more obscure meetings that one might not otherwise attend. All that ends in a week’s time. Councils have to revert to the usual public meeting arrangements which isn’t really possible while the Covid regulations continue. What are they expected to do? Demand the public arrives early and take a Lateral Flow test? Bexley has taken the pragmatic view and pretty much cancelled meetings until mid-June. It’s what comes from having a Government that has difficulty differentiating arses from elbows.

The end result is more filler pieces which to my amazement people seem to read more than the Council meeting reports. Here’s another one… 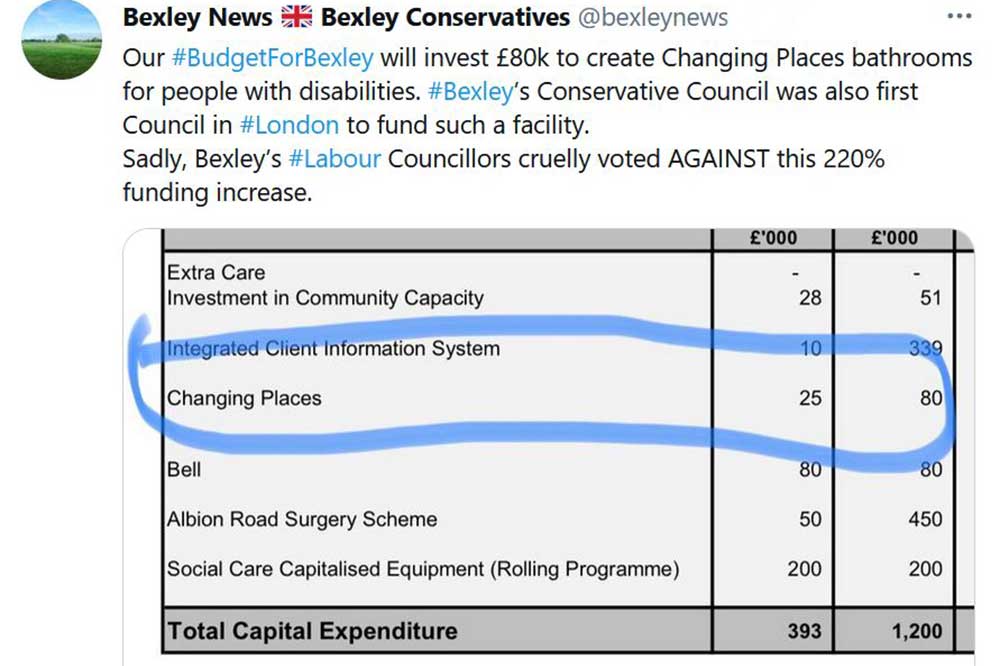 When short of material the first port of call must always be the Conservatives Twitter propaganda channel. Today they are crowing about their Changing Places initiative which is a good one. But can they leave it at that? Of course not.

According to the former Number 10 spin doctor the Labour Group didn’t want them. Does anyone believe that?

He has made no secret of the fact when speaking in the Chamber but one of Labour Leader Daniel Francis’s young daughters suffers from Cerebral Palsy and he has personally campaigned for better bathrooms for the disabled including in recent days.

I met Daniel’s daughter once and she is much the same age as my own granddaughter and I can tell you that contrasting the two in my own mind is heart breaking. Daniel and his wife will be moving Heaven and Earth to improve the lot of their daughter and to suggest that he might do otherwise either directly or indirectly is bloody disgraceful even by the appalling standards of the disgusting duo who run the anonymous and cowardly Tory propaganda channel.

School Crossing patrols
In hindsight it was a mistake for Bexley Council not to directly fund school crossing patrols and rely instead on the generosity of Sadiq Khan. The Mayor has now run out of money and Bexley’s Crossing Patrols are in big trouble.

Parents and teachers are understandably annoyed. This is a statement issued by a Head Teacher in Bexley.

Dear Parent/Carer
I would like to update you on where we are with regards to a new school crossing patrol.

As a school, we have done everything we can. We have raised our concerns with the Council as well as our local MP. I have also been speaking to some of the local Councillors. The Councillors have advised that:
· the Council’s current policy is to freeze recruitment for any vacant crossing patrols. As a result, 17 of the 28 school crossing patrols in the Borough are vacant and this includes Old Bexley;
· the petition that has been raised by parents will be heard by the Place Scrutiny Committee as one of the Councillors is the Chair of this Committee;
· if parents would like to raise the issue with the ward Councillors for our area (St Mary’s and St James Ward), they can be contacted as follows:
Councillor.alan.downing@bexley.gov.uk and Councillor.alex.sawyer@bexley.gov.uk.
Additionally, Councillor Peter Craske is the Cabinet Members for Places with responsibility for road safety and can be contacted at councillor.peter.craske@bexley.gov.uk

I will of course contact you again should I hear any news from the Council.

There was a time when Councillor Craske advocated the withdrawal of all School Crossing Patrols as a money saving measure. Fortunately wiser counsel prevailed. 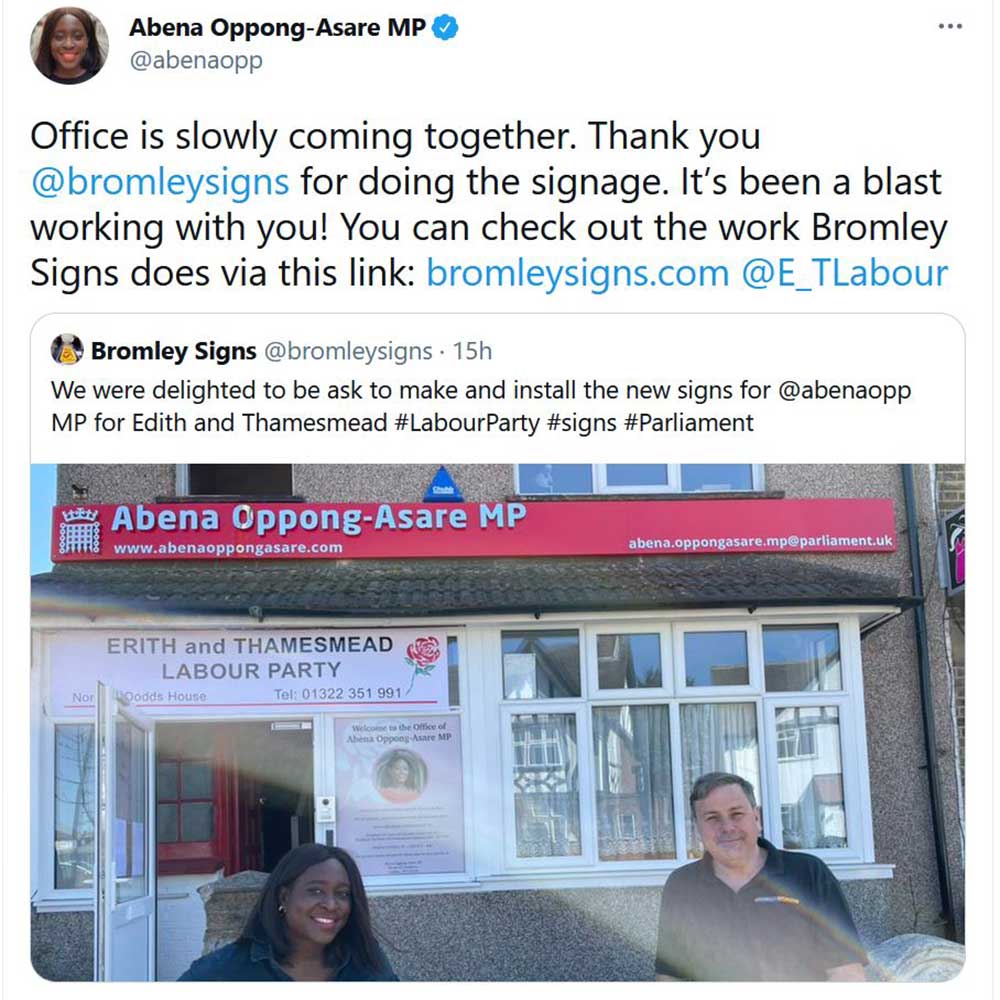 One of my Labour friends wrote to say I had been far too generous in my coverage of the new signage at Norman Dodds House and that the restoration of the old Norman Dodds sign was a direct result of BiB showing it missing a week ago.

That may be true, how could I know for sure, but in total three self-proclaimed Labour Party members were agitated about the loss of Labour history so it could equally have been due to internal pressures brought to bear.

In due course we will learn how much the red sign cost. Less than Carrie’s Cushiongate must be pretty much guaranteed. 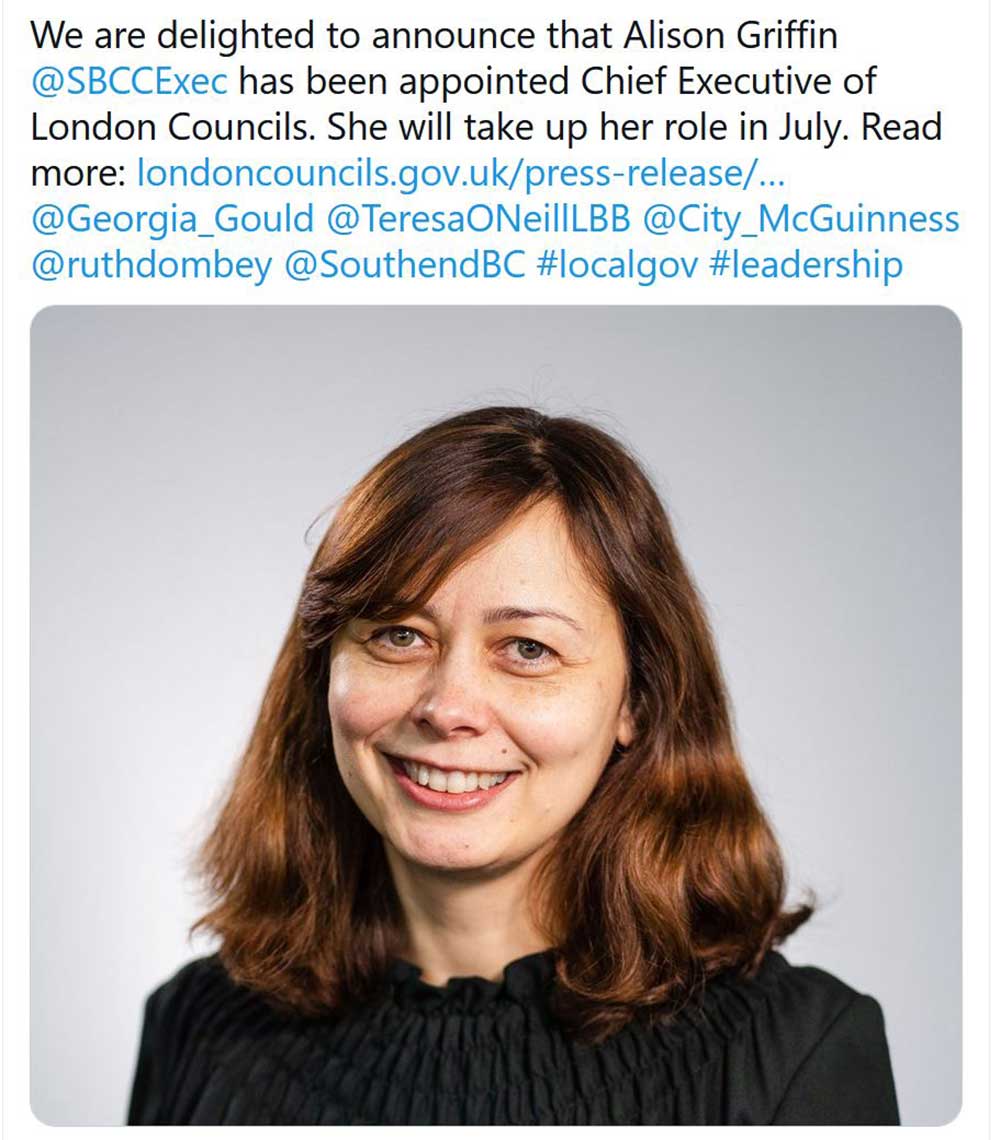 I used to think Alison Griffin, Bexley’s Finance Director until early 2017 to be a cut above the remainder of Bexley’s top team but all of that flew out of the window when, while acting as Chief Executive, she banned Mick Barnbrook from making Freedom of Information requests. He had a habit of getting too close to the truth.

The Information Commissioner supported her decision after she wrote to them to justify her decision. The ICO’s letter to Mick indicated that he had been labelled a deranged raging racist. A man who was Sports Mentor to Stephen Lawrence and reported 19 politicians to the police, including the Leader of the BNP, 18 of them white, for expense fiddles.

Griffin went to Southend-on-Sea as Chief Executive and I thought I would be clever by asking a friend who lives there what he thought of her. Alas he didn’t have a clue who she was.

Now we learn that someone who doesn’t like people probing too closely into Council affairs has crawled her way to the top of London’s Council tree. One must hope that her final weeks in Bexley was a one off aberration.

Probably I am being too generous again.

Note: The old blog restored and referenced above has not been checked for broken links, mobile conformity etc. 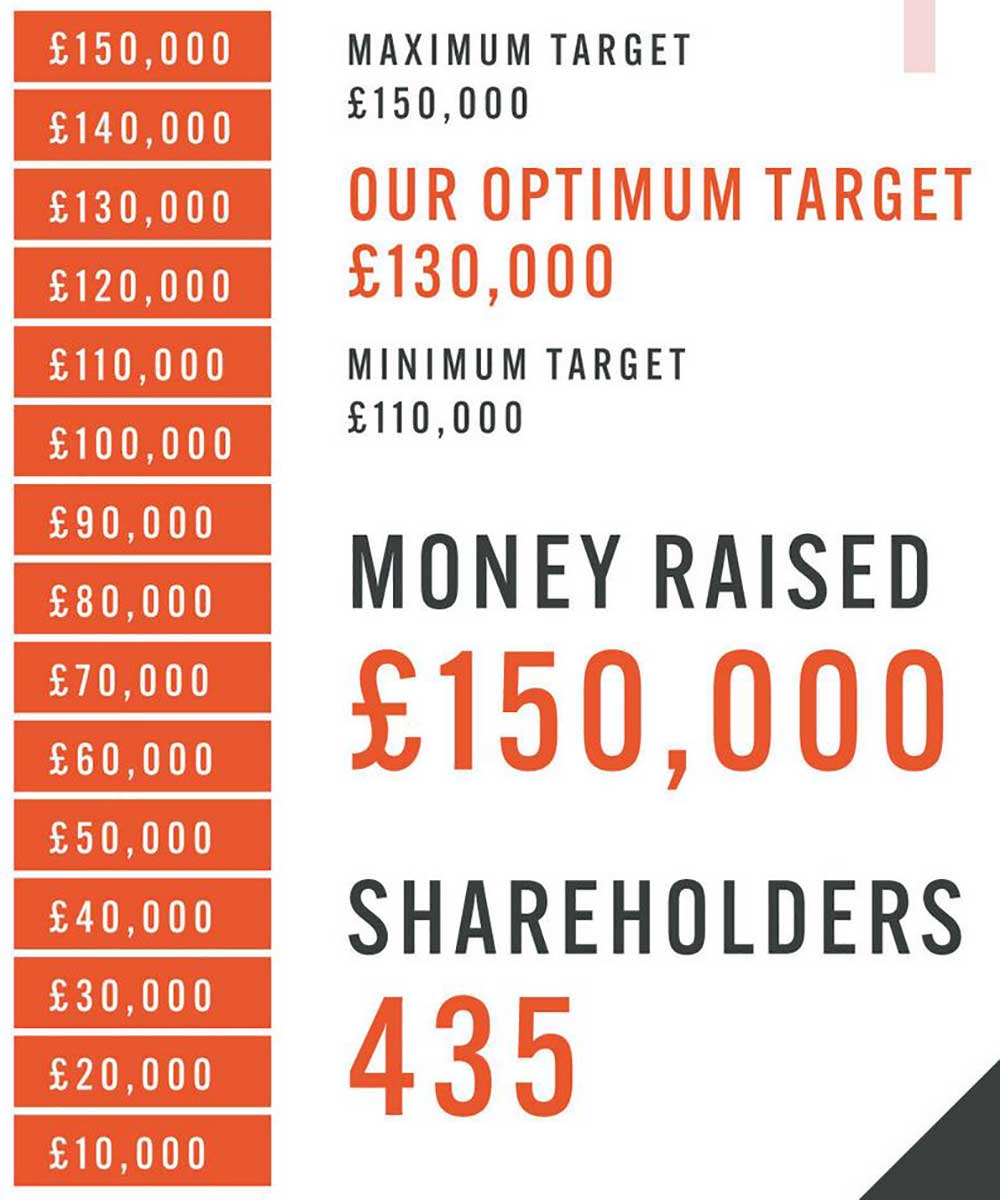 With a couple of days to spare the Carnegie Building Restoration Appeal reached its Maximum Target of £150,000. A very fine achievement.

It may have reached it just a little bit earlier because I tried to register a friend who doesn’t have a bank card as a share holder but there was no way of getting his name and address on file when using my Debit Card.

You can’t do anything much at all these days without a Smart Phone and a bank account.

The question now is, will I be brave enough to go to a shareholders’ meeting and risk bumping into Councillor Read?