5 August - ‘Delivering for Bexley’ - Nothing but shamless propaganda

It is often said of Councils, especially by those who try to extend the message of their constant failures to the wider population, that the only thing residents care about is that the bins get emptied - and in Bexley they don’t. Not this year, not in the Spring of last year either.

Bexley Conservatives are therefore desperately fighting a rearguard action to show it is not their fault, but it is.

The contract with Serco dates from the same era as when the Cabinet Member for Adultsְ’ Services boasted that Bexley had negotiated the lowest pay in London for care workers. Do the same with the refuse contract and the result is likely to be the same. 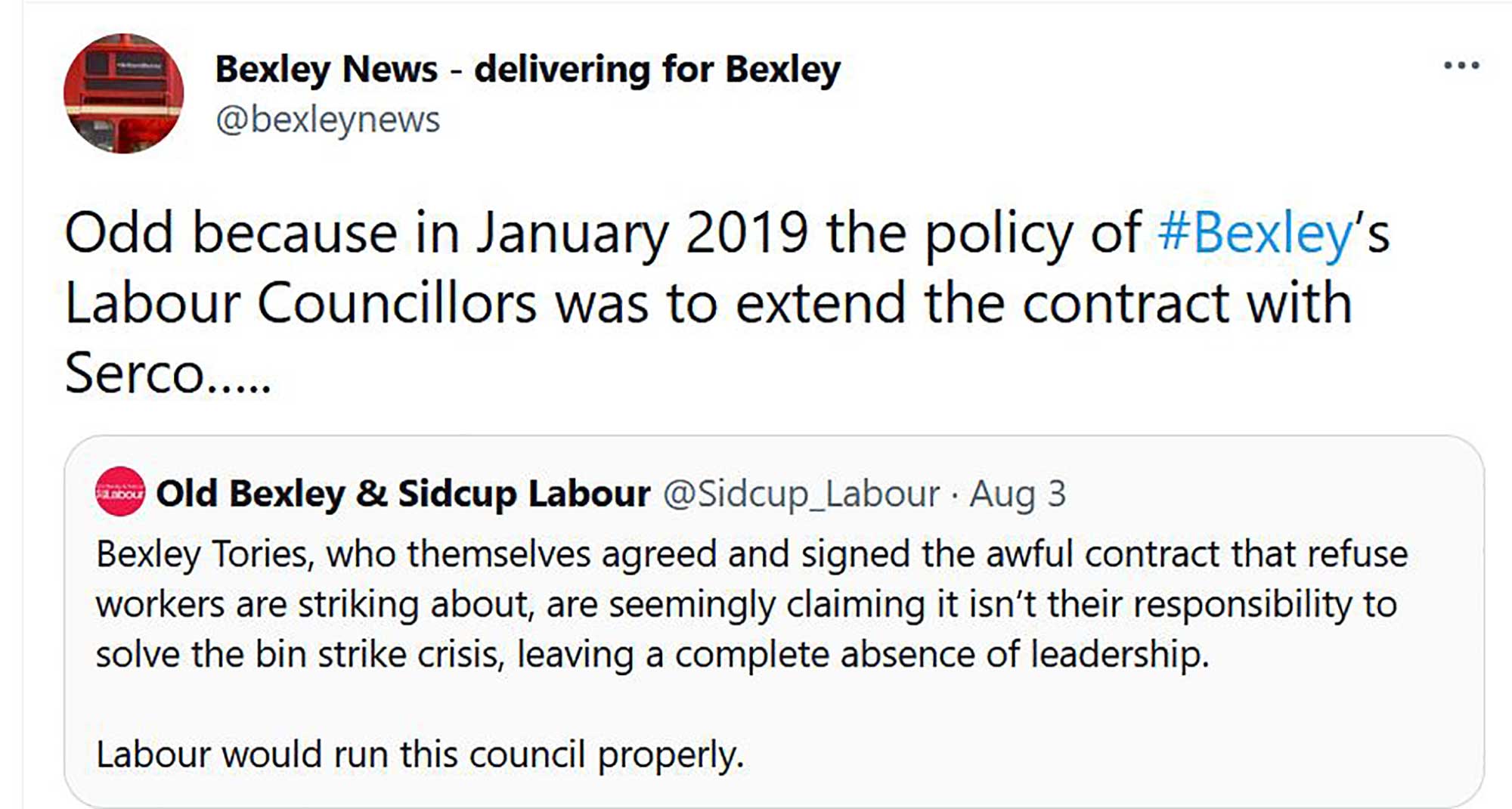 Bexley Council has the responsibility in law to empty dustbins but having handed the job to someone else they are powerless. The Leader is being disingenuous when she implies that the strike is purely over current rates of pay. It is also about unpaid back pay and unacceptable working conditions.

@bexleynews, the propaganda wing of Bexley Council, is trying to lie its way into the voters’ confidence. They blame Labour Councillors for the strike and shamelessly changed their name to ‘Bexley News - delivering for Bexley’. Since when have they done that?

Earlier this week @bexleynews said that last year Labour was in favour of a Serco contract extension. At the relevant Council meeting Labour Councillors advocated bringing the service ‘in-house’. It was a Council Officer since retired who said the Serco contract would have to be extended by 18 months and the Tories went along with him.

I challenged @bexleynews for the evidence of their apparently false assertion but reply came there none.

@bexleynews has been at it again. Today they are back with more half truths and outright lies. Labour Councillors are supporting the strikers they say. One undoubtedly has but to suggest that all of them are manning the picket lines oversteps the mark. Sympathetic to the strikers’ poor working conditions they may be; but not loving the suffering of residents. Had their ideas been adopted two and a half years ago, Bexley Council would not be where it is today.

As you can see below, I am not alone in challenging the worst Tory lies but once again the question goes unanswered. 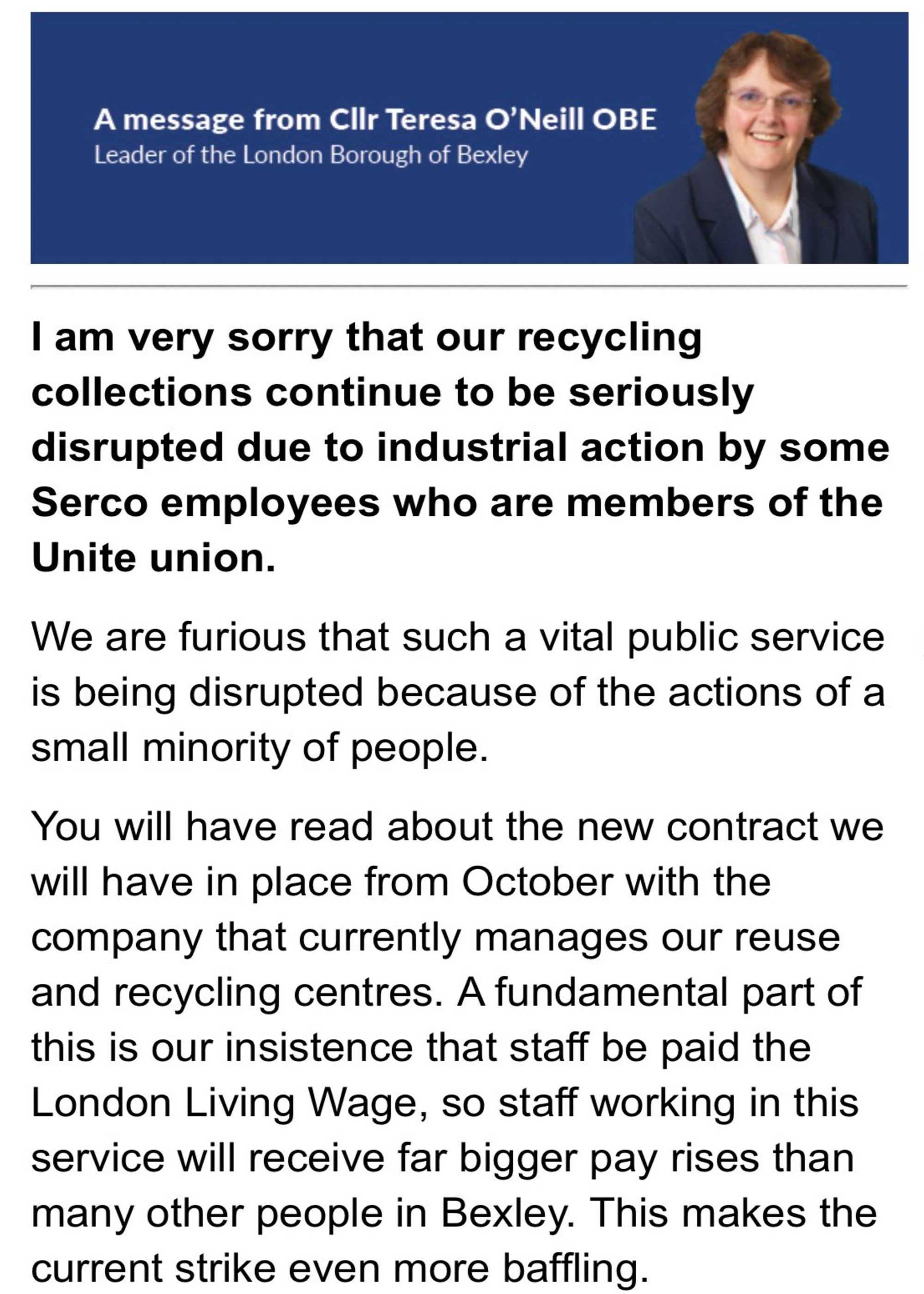 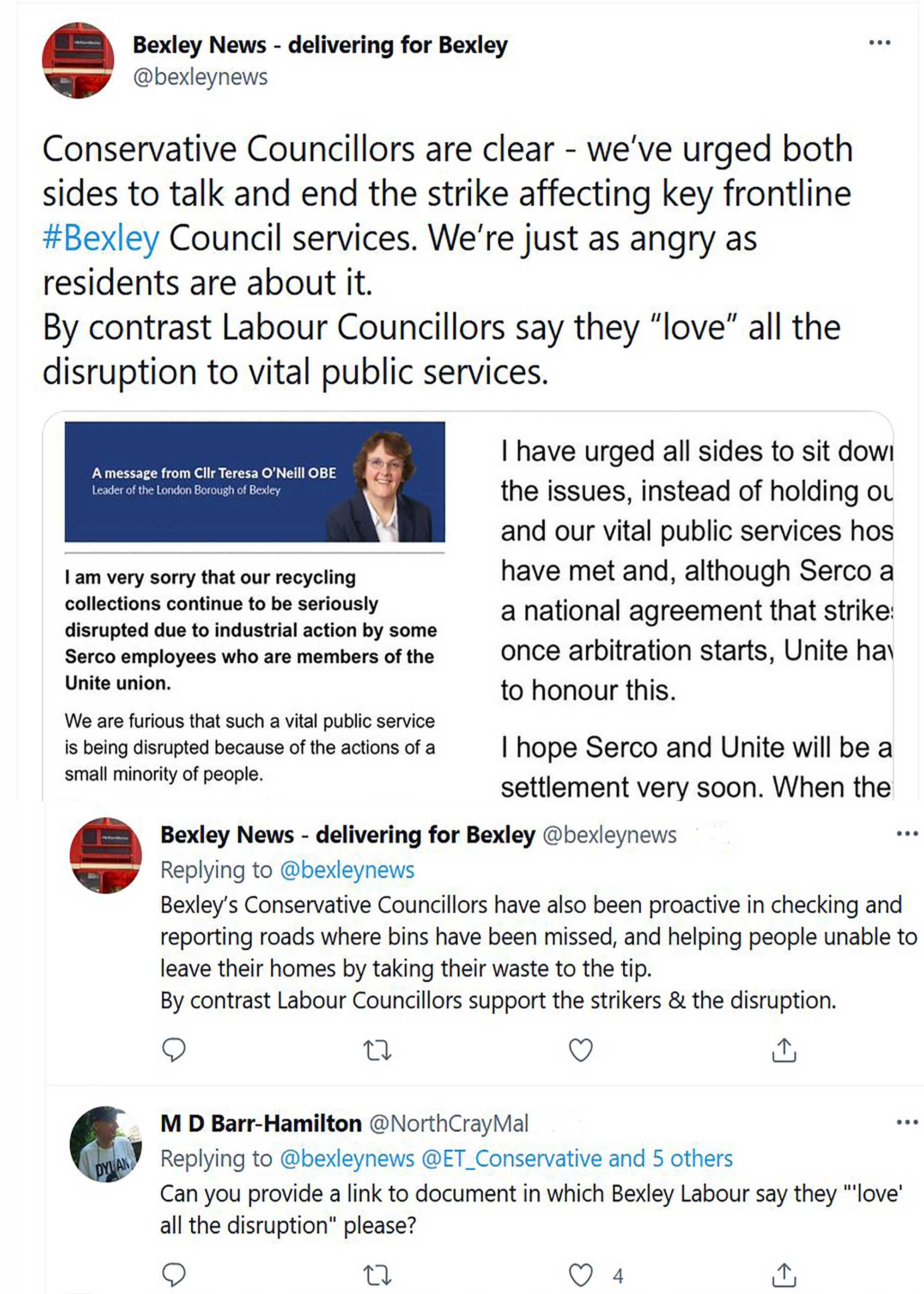 May I ask another question? If it is such a small minority of workers striking, why is it that of the five bins Bexley residents endure, only the green lidded bin is being emptied fortnightly, the food waste occasionally and the others neglected?