It has been ages since there was any sort of tip off from a friendly Councillor. I haven’t a clue of the outcome of the complaint against Councillor Danny Hackett after he was on the receiving end of a totally false allegation by a Labour activist. She said he had been colluding with me last August or thereabouts to publish blogs critical of said Labour activist. Not true because I hadn’t heard from Danny all Summer and everything written about the troublemaker had been gleaned from publicly available Twitter posts.

It is the same this year. Danny gets busy with his charitable works and the last time I heard from him was on 9th June when he enquired about the health of a mutual friend. Then, yesterday I received the shortest of messages from a Councillor - not Danny - which said there was a “significant amount” of good work being done behind the scenes aimed at ending the bin strike. Tantalisingly there was no clue as to what it might be and residents are so used to the lies emanating from Bexley Council and @bexleynews in particular that even if the details had been forthcoming would anyone believe them? Does Bexley still use the fatuous slogan ‘Trusted by Bexley Residents’.

More useful was the suggestion that I trawl Facebook for bin comments; so I did. 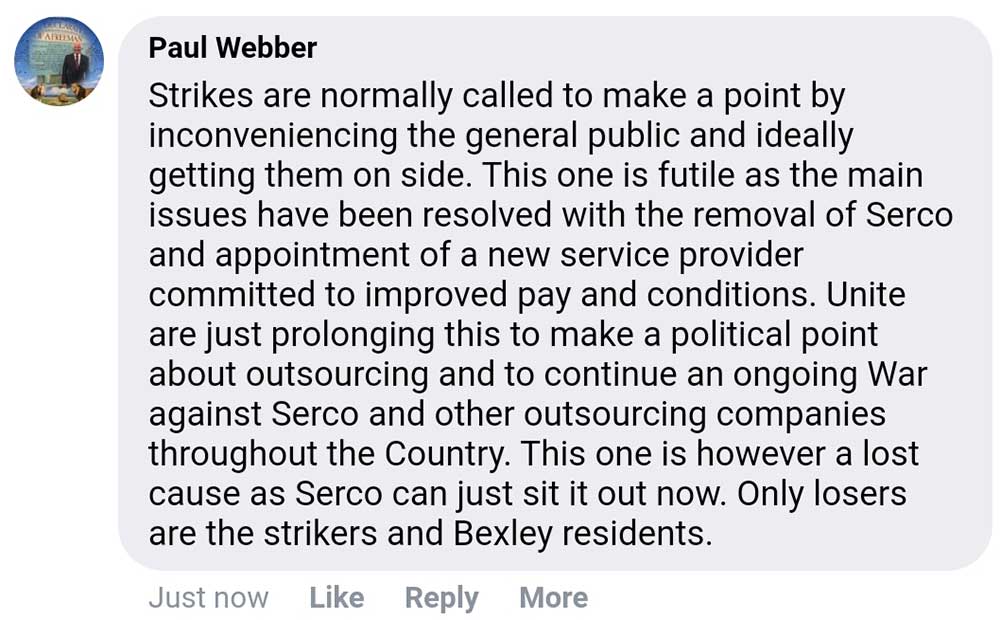 There are suggestions that the strike has been made worse by the economically catastrophic pingdemic favoured by the “spineless twat” (†) but on balance I was drawn towards Paul Webber’s theory that the Unite union is on a mission to end outsourcing.

Their stated mission to give Bexley residents A Summer of Stink amply demonstrates that Unite is not on the residents’ side while Councillors just might be - the pathetic political posturing of @bexleynews notwithstanding.

There will be a lot of people who think that the end of outsourcing might be a good idea but if that is Unite’s aim it makes theirs a political strike.

In Bexley the complaint has been about pay and working conditions. Random drug tests have been mentioned more than once but how true that might be is unknown.

There has been similar industrial action in Thurrock but the Council there negotiated a return to work. The union has now turned their attention to Croydon.

If Unite’s motive really is to reduce the level of outsourcing they may be fighting a losing battle. Lambeth Council has just signed up with Serco despite the experience in Bexley. Good luck to them.

† I spent yet another rainy day with a cousin at The Oval last week. He had given Guest tickets to fellow members of his choir so a lot of new faces. Filling in the gaps between play I soon discovered that the “spineless twat” opinion is even more widespread. This will spell trouble and I am inclined to blame his missus for BJ’s inevitable downfall.