17 August - Where’s Jackie Belton? Why is she still in a job? 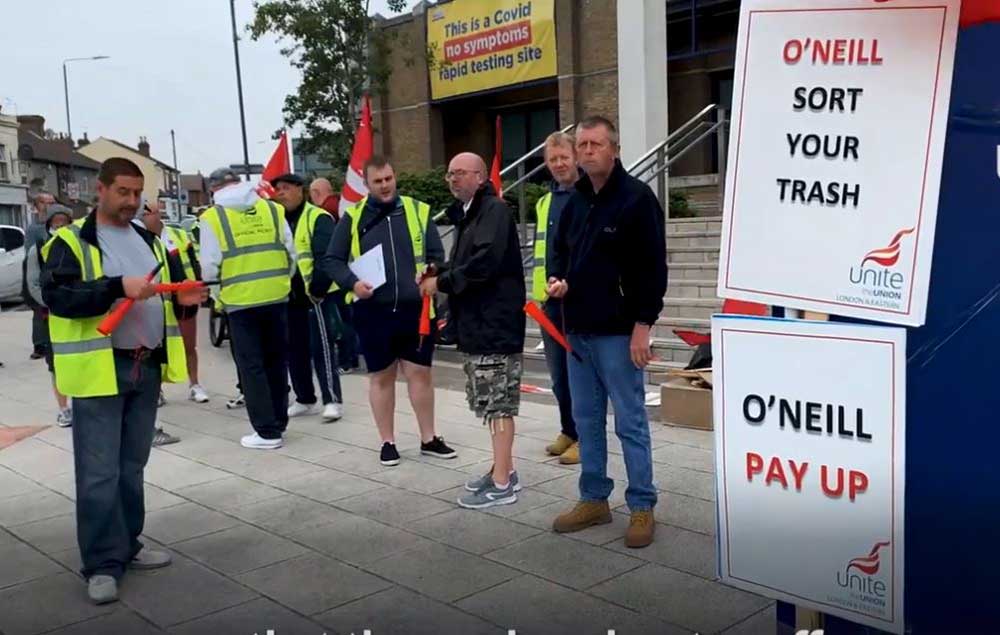 The bin strike is still eroding what reputation for good management Bexley Council might once have had, or maybe thought it had. Rather too many chickens have had the annoying habit of returning to the borough roost recently. The anti-transport infrastructure policy resulted in no river crossing which in turn led to less investment than could have been the case and to which the lack of affordable homes may be related. The latter has helped the finances to run dry and to which calamity we can now add the bin strike.

I may have some sympathy with the Council’s predicament but there is no getting away from the fact that it was them, or their Conservative predecessors, who drew up the shoddy contract with Serco. O’NEILL is now in no position to “SORT YOUR TRASH“ (Photo 1) and we know how reluctant she is to get rid of Cabinet Member Craske.

Some aspects of his bin policies have always been difficult to understand. If the bin lid is slightly up his instructions are to leave it behind yet I have heard him plead with residents to put out as much recycling stuff as possible, specifically asking that they don’t forget the toilet roll centres. He does it because it makes money so why not collect it all?

It’s the same with recycling banks. If he wants as much as possible to be collected why does Craske fine people who do what he asks?

The man simply fails to think ahead as I found out when he posted homophobic references to me and others and was arrested for it after the police traced the source to his IP address. With brains like that in charge it is no wonder Bexley is in the mess it is.

Only a week ago Bexley Council had to remove a three piece suite dumped close to home and yesterday another one appeared. Clearly Peter Craske has got his waste policies wrong. Charging £38 to have large items removed from home is asking for trouble.

A tip off said that BBC Radio London was going to feature Bexley’s bins this morning and I had to grit my teeth and tune into the BBC for the first time since Teresa O’Neill graced its airways. Three whole hours on and off of relentless criticism of Bexley Council. Anyone who doesn’t know about the situation would be 100% sure that the problems were entirely of Bexley’s making which is only nearly right. Thanks to their contract, some might say their outsourcing decision, they can do little other than tell residents that they are frustrated too, a statement ridiculed by programme presenter Vanessa Feltz several times.

A reporter live from the scruffy streets of Bexley said that he could see rats running wild and the whole place was stinking.

I am not sure why that should be because until this week general rubbish and food waste was being collected at the regular interval, mine certainly was, and why should paper, tin cans, glass and plastic smell? Mine all go into the used washing up water before being binned. Maybe posher people with dish washing machines cannot do that.

If Bexley smells now it will surely get worse. Craske’s latest madcap idea is to resume the collection of plastics and abandon food waste collecting. It must now go in general waste and be picked up fortnightly. A recipe for more rats and maggots.

The SERCO Union representative came over well and without any counter-argument is likely to be believed even though the odd statement was questionable but someone somewhere in our beleaguered Council had decided to keep schtum. Why? Don’t they have an argument to put forward? Why do we pay Jackie Belton £213,000 a year if she is incapable of speaking up for the Council?

Frustration and anger. Richard spells it out.

The Union makes its case but Bexley Council has no response.

Mediocre services and phones not answered.

The final verdict. Terrible communications and no empathy.