26 August (Part 1) - BT and the NHS are still a joke. Probably always will be

I am not sure whether I should be disappointed or relieved that a self-indulgent rant provoked more comment than more serious pieces.

BT
I received helpful advice about Voice Over Internet Protocol telephony from a reader and a reminder that it will be the only choice in a few more years, so why not do it now?

It made me think about the wiring situation as wi-fi phones may give the sort of problem one hears too often while listening to talk radio phone-ins. I have one or two phone sockets in five different rooms all wired in series, one for each number. That’s no good for VOIP even if the telephone cable can act as a cheap and cheerful CAT5.

I have multiple LAN sockets in four rooms but not all ideally placed for a phone. Correcting that was a job I started a couple of years ago and cables already run from the network switch with a coil left in the roof but enthusiasm waned. Looks like some awkward crawling in the roof with a big drill is on the horizon. I am totally sick of BT.

After wasting an hour on Chat yesterday getting them to fix the constantly ringing phone it did it again this morning; no one cares any more, which brings me to… 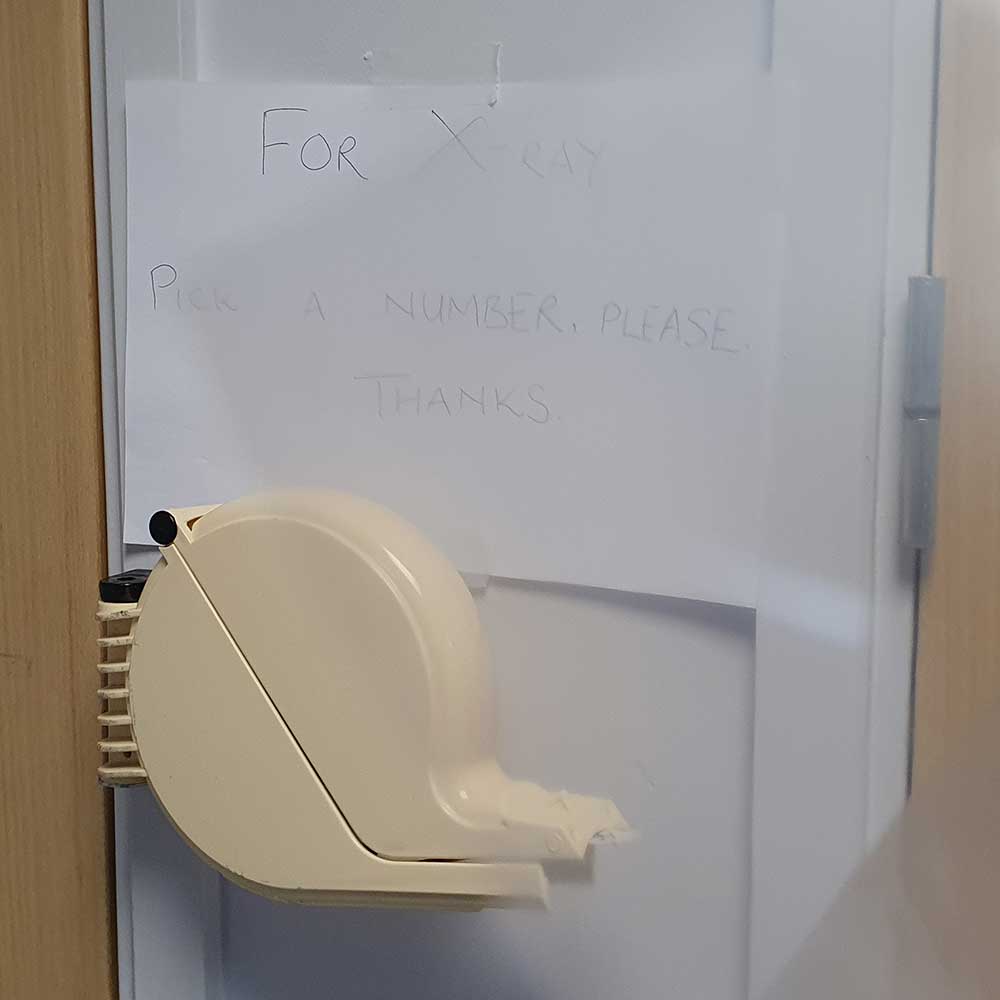 Someone who uses the same GP surgery as I do has had a different experience to me. The receptionists are good and it is the doctors who are rotten he says. I plead ignorance, I was refused access to a doctor and only saw a nurse who was very good indeed.

To the contrary another reader related how his wife managed to jump through the NHS hoops and see her Bexley GP within 24 hours. He doesn’t name the doctor which is probably a wise decision because we might all sign up.

My nurse sent me to Imaging at QEH where I showed up at 10:00 this morning. It’s a walk-in service. Imaging Reception sent me to a single X-ray facility at the far end of the hospital. There were nine people in front of me and half an hour later when a patient emerged from the X-Ray room four or five people rounded on the radiologist accusing him of taking people in in the wrong order.

It was only then that I realised there was a near illegible pencil note on the wall and a crude ticket dispenser.

Another half hour passed and someone else came out. I calculated that I would be there for another four hours at least. After listening to a scaffolder relating how a four storey scaffold collapsed and killed his workmate leaving him with shattered bones, it was past eleven o’clock and he had been patiently waiting since just after 8:30. I decided that I had had enough.

I walked back to the main Imaging Reception and asked for my referral letter to be returned. I related my story and was told to go over there; straight into an empty X-ray facility. In and out in five minutes.

I tried to make a complaint to PALS but was told that due to Covid no one was working. It just about sums up the National Health Service.

Another of yesterday’s messages said that the sender was due a blood test before a medical procedure today. However when he got to phlebotomy he was sent away because their computer was down. When I have had blood tests it was done with a needle not with a computer mouse. What? Only one computer and no back up! That’s NHS management for you.

A waste of £350
Someone brave enough to read to the end of yesterday’s blog recommended separate glasses for driving. He too had wasted money on varifocal glasses that were rapidly discarded. No one asked which Bexleyheath optician dispensed the glasses but whatever the problem is they seem determined to get to the bottom of it. if the problem is eventually resolved - or not - maybe I wil let the cat out of the bag.