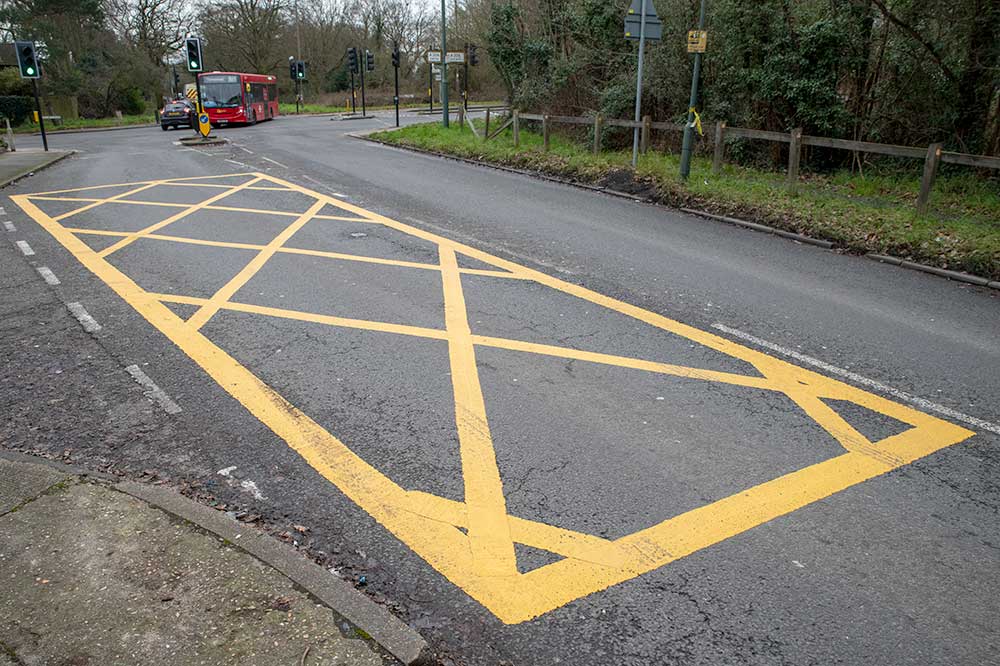 Everyone who drives to the north of the borough will be familiar with the traffic lights at the top of Knee Hill. In the photograph Brampton Road is to the south and starts where the bus is.

Large vehicles coming from the East (left) cannot turn left if someone pulls up to and stops at the Brampton Road traffic lights and for that reason the white line is set well back.

The sensible solution would be to ease the bend on the South Eastern corner by cutting into the grass verge, there is plenty of room, but this is Bexley where common sense is rarely seen inside the borough boundary.

Yesterday I drove to Blackfen, more of which anon. There are gas works under the flyover in Abbey Road which are best avoided so I ascended New Road and came in from the left at the aforesaid junction. The turning left into Brampton Road was difficult as a large van had plonked itself right up against the lights.

Fortunately the B11 bus behind me was caught by a red light or there would be more serious fun and games.

At around 07:45 this morning I drove the same route en-route to the Hyundai dealer for a service and MOT. A large black Mercedes was where it shouldn’t be and there was no way the 301 in front of me could turn left.

At 13:15 I was a passenger taking the same route to pick up my own car. Another bus blockage! That’s three in a row and perhaps a bit unusual but the problem is not uncommon. This time there were two yellow jacketed people there videoing events. I lowered the window and said “it was the same this morning” and was informed that Bexley Council was surveying in anticipation of yet another yellow money box.

It is hard to disagree that something should be done but that something should be easing the bend but there is no money in that and motorists must be fleeced at every opportunity. The costs of a CCTV monitored yellow box will far exceed a bit of tarmac but as already stated, common sense is not to be found in the Civic Offices, least of all in the Highways Manager’s head.

It will be a tricky one to negotiate because you get red light jumpers on Woolwich Road who can cause an unexpected stop and those ascending Knee Hill who sometimes decide to turn right without warning are another source of chaos.

But if there are coffers to be filled what’s a bit of specially engineered road chaos to a Council as incompetent as Bexley’s? Simple low cost solutions are best avoided.