I am beginning to miss the bin strike which created a steady stream of news items because right now there is only Twitter to fall back upon. Fortunately Tony is keeping Bexley Council on their toes. 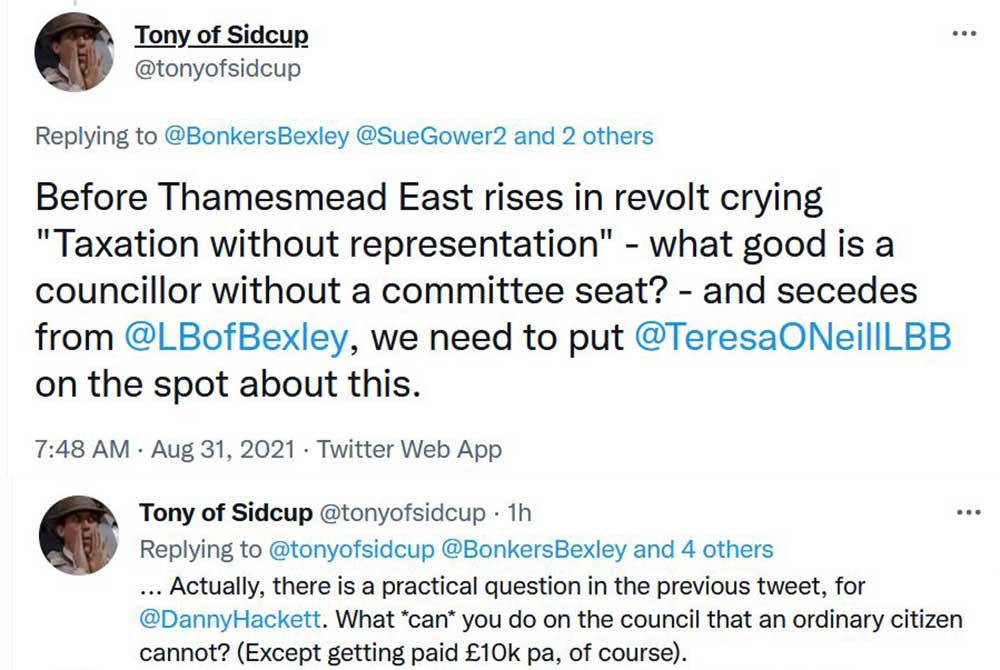 He has been asking why it is that Councillor Danny Hackett (Independent, Thamesmead East) is denied any Committee position and he has been told “it’s the rules”.

That may be true but it would be a more complete truth to say that certain Conservatives and probably every Labour Member wanted him out.

Danny and I discussed it on the phone at the time and he named names but I have completely forgotten who was on his side and who was not. I have a vague recollection that Leader Teresa O’Neill backed him but was shouted down by some of her colleagues and went into rapid reverse, however Tony’s question remains. What can a single Independent Councillor do apart from his residents’ case work?

Bexley Council is governed in the same way as the country as a whole, by a Cabinet with a top dog who will always have the final say. That’s Mrs. Johnson in Downing Street and Teresa O’Neill in Bexley.

No one can over-rule the Leader of the Council. She has a Cabinet of six each of whom look after their own portfolios and advise the Leader but she has to be persuaded that their ideas are good. Or maybe they are her ideas anyway and Public Cabinet is a pantomime.

The only Councillors who might influence the Cabinet are members of sub-Committees set up to look into specific problems. Scrutiny Committees are ignored as an independent panel discovered three years ago.

• They could not find any evidence of any different outcome secured through any Overview and Scrutiny Committee.
• Tens of thousands of hours of officers’ time is taken up annually (by Scrutiny) to achieve nothing.
• Officers throughout the organisation are apprehensive about interacting with Overview and Scrutiny.
•Those asking questions are dealt with in an unacceptable manner. Rudely, aggressively, discourteously or disrespectfully.
• Perceptions are negative and it has very serious implications for the authority and is damaging to its reputation.

Scrutiny Chairman who rock the boat by being assertive are soon shown the door. Where did Councillors Dourmoush and Hall go? To back bench oblivion.

Why did the ambition and capable Councillor Gower accept an invitation to Cabinet? Because it is the only job worth having in Council.

Bexley Council will not be unique but it is effectively a one woman dictatorship.