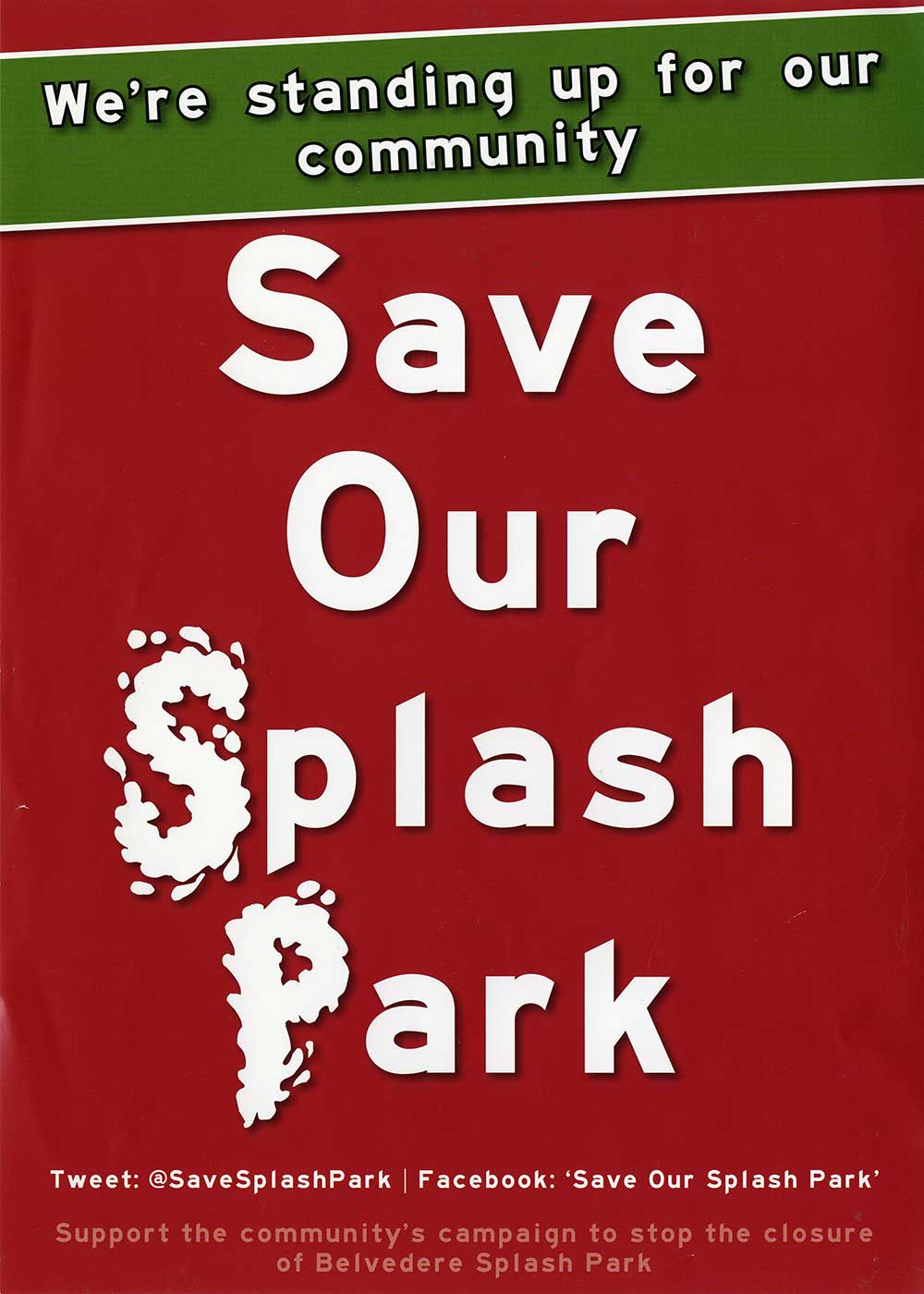 It’s probably not possible to go one better than yesterday’s Horrible History where bad management at Bexley Council led to death and cover-up. The closure of Belvedere’s Splash Park in 2015 may have been a contender but the story is horribly complicated and may be more outrageous deception than outright lie exemplified by rejection of the first expert opinion on its viability. It failed to make the case for closure firmly enough and another was commissioned with the scary word Cryptosporidium brought to the fore. The two reports (PDF) sit side by side here for the few who have nothing better to do.

The fact is that the Splash Park which opened on 13th August 2005 under the Labour administration had been designed to 2004 standards and by 2014 they were no longer really good enough. The Conservatives were determined to close the Splash Park whatever the counter-arguments might be. One of the first things they did when coming to office in 2006 and again in 2010 (Evening Standard) was to propose an entrance fee (News Shopper). It was Labour’s gift to the North of the borough and as such never likely to be a candidate for significant expenditure under the Conservatives but ripping it out and getting Cory Environmental to pay for a new and arguably better facility ticked all the Tory boxes.

The fact that maintenance had been done on the cheap was a major impediment to restoration and the 314 references to it on Bonkers with no Indexing facility ensures that the story must remain largely forgotten.

Providing an Index at this late stage is not a good use of time and Bexley Council’s dislike for the Indexing of major subjects to improve accessibility is not sufficient attraction. The Indexing of related blogs was reported to the police. Apparently providing reader assistance is harassment. There were 17 Indices at the time and 21 now. 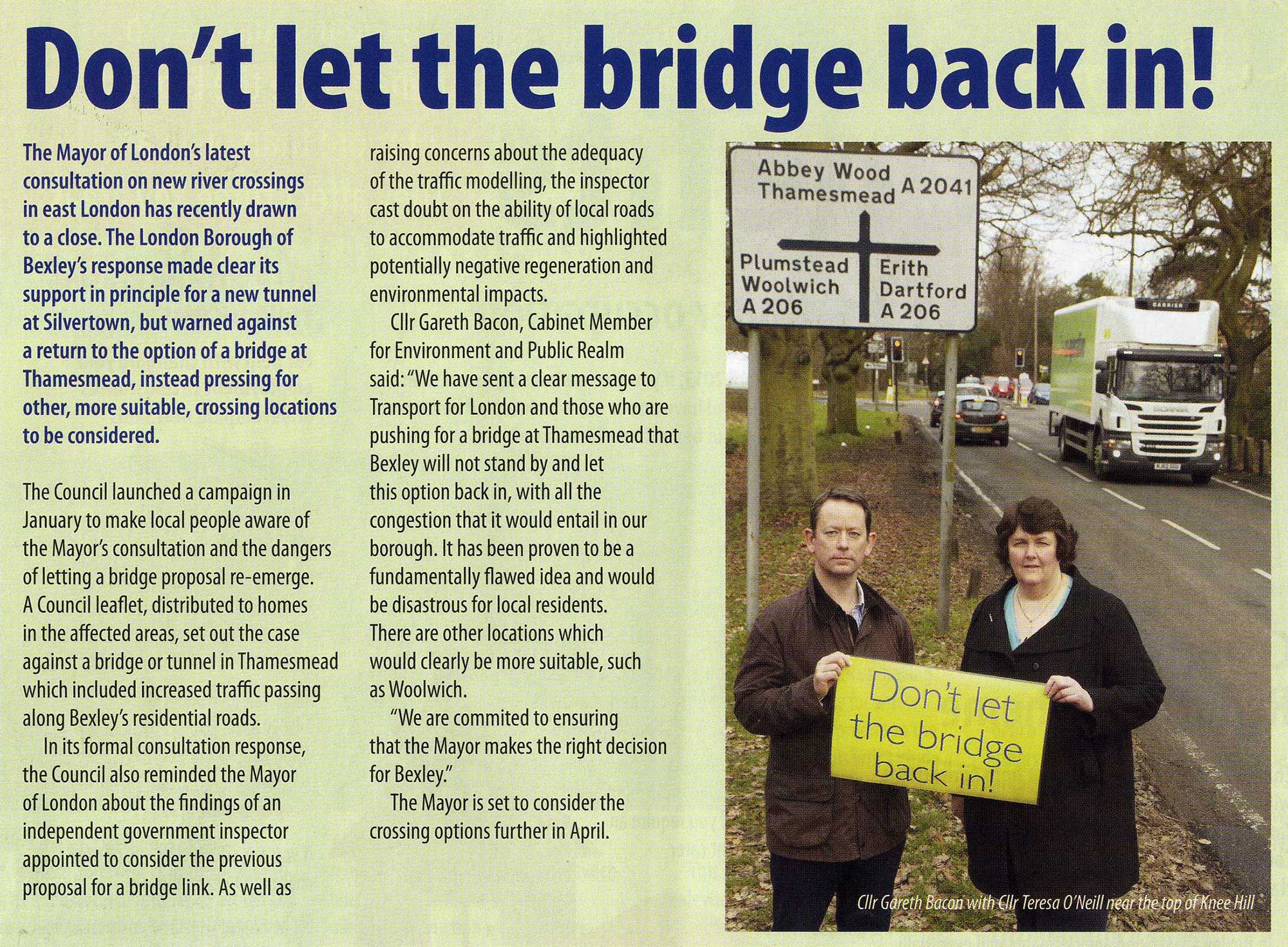 With the Splash Park ruled out for further attention the spotlight is redirected to something which concerns every Bexley resident sooner or later, frequently or rarely. The fact that there is no easy way to cross the Thames. For that inconvenience and impediment to economic expansion which hits every Bexley pocket there is little doubt that just one person is responsible, the Leader of Bexley Council for the past 13 years, Teresa O’Neill.

Fortunately the subject is Indexed.

The message was put out that London Mayor Ken Livingstone’s modest little bridge would draw lorries up Knee Hill and along Brampton Road which was the heart of Teresa O’Neill’s ward. The road became festooned with protest posters and the succeeding Mayor Boris Johnson who had proclaimed O’Neill his most admired politician in London and a frequent visitor to the borough (see below) was easily persuaded to cancel the crossing.

Lorry drivers are far too stupid to disperse along the dual carriageway A2106 and would always prefer a snarl up on Knee Hill and Bexley Council is far too stupid to put in a width restrictor. Ironically they have since got close to doing that as Harrow Manorway no longer carries two lanes of traffic in each direction but just one and with the speed limit reduced from 40 to 20 m.p.h.

Bexley Council spent taxpayers’ money on their politically inspired campaign and of course lied their socks off, among them deliberately confusing Ken Livingston’s little bridge with the monster that was abandoned in the middle 1990s following a public enquiry. A road would have burrowed under Plumstead. More than 25 years later South East London is as isolated and handicapped as it ever was.

While TfL’s own surveys showed that residents both north and south of the river, especially in Bexley, were heavily in favour of a bridge, Bexley Council was busy filling the pages of the News Shopper with their contrariness, all because the Leader’s seat must be protected at all costs.

Far too late Bexley Council’s stupidity was recognised and Mayor Johnson examined the possibility of two river crossings making landfall in or very close to Bexley. Unfortunately another far worse Mayor came along who is content to let Bexley rot.

And so another massive failure in Bexley can be laid at the door of the Leader and the Councillors who continue to vote for her following Council elections.

Maybe the newcomers will have more sense.