3 February - Is history about to repeat itself?

The following comment must be prefixed with the usual health warning about broken links. It will refer back to events which fall within the (currently) six and a half year wide blog black hole. A gap which came about following an injudicious global rename a year ago doing considerable damage to the site structure which went unnoticed until the error log overflowed and killed it.

To support what follows a small number of three and four year old pages have been restored but they may contain link errors. probably best not to go beyond reading the text. So what is this all about?

It arises following yesterday’s report on the malicious complaint against Councillor Danny Hackett. A reader asked why it was handled by a Council Officer and not Councillors while I noticed that the HR Manager was no longer calling himself the HR Manager and Interim Monitoring Officer.

The first question was easy to answer. It is not reasonable to go to the trouble and expense of convening the Code of Conduct Committee for every trivial, vindictive, mischievous, spiteful or utterly ridiculous complaint every time the irrationally obsessed runs amok with a bottle of green ink. The Labour inspired complaint met pretty well all of those criteria so it was metaphorically binned.

My own question is more complicated. When I searched the web at the weekend because of the Covid test centre revelations Bexley’s website confirmed my view that Mr. Hollier was the Interim Monitoring Officer. It also said his title had changed from Head of HR to Deputy Director Corporate Services and HR was in the hands of an underling. At a time of job cuts and pay freezes Council management requires promotions to ensure ends meet. The title change didn’t warrant a mention here, Nick Hollier was still responsible for HR but perhaps not so directly as before.

The recent complaint against Danny Hackett revealed that contrary to what is still on Bexley’s website today, Nick Hollier is no longer Interim Monitoring Officer. If there is an appeal it will go up a level to the Monitoring Officer.

It is probably necessary to explain the history of Monitoring Officers in Bexley. The first I remember was a Ms. Hogan who became embroiled in Bexley Council’s decision not to prosecute their former Leader for dipping his hands into the till. Whether she left because she was too honest for Bexley or something else I have no idea but there were reports that she gave up on being a solicitor at around the same time.

If you trawl through those links to even older blogs you will see that Bexley Council refused to disclose if there had been a pay off even after the Information Commissioner instructed them to do so. You will also see that a Mr. Akin Alabi was appointed Monitoring Officer in Ms. Hogan’s place.

Mr. Alabi was obstructive at times but it will be part of his job to protect Bexley Council from prying eyes so that is to be expected.

Several years went by before my legal contact John Watson noticed that Mr. Alabi’s name wasn’t showing up on the Law Society’s members’ list and an FOI revealed that being either a solicitor or a barrister was a requirement of his job in Bexley. A written enquiry to both the Law Society and the Bar Council for confirmation of registration drew a blank on both.

It was not impossible that Bexley Council had accepted an overseas qualification but they refused an FOI on the subject. the decision was challenged and rejected. The case went to the Information Commissioner.

It is here that the true colours of Bexley Council in 2016 came to the fore. Instead of being truthful and either saying that Mr. Alabi had the qualifications or he had not and they didn’t care, they banned John Watson from contacting the Council for six months because he was causing “distress and embarrassment”.

In 2016 there were six residents monitoring Bexley Council’s activities and one of them managed all their FOIs. Michael Barnbrook was the FOI man and by that time had submitted just over one hundred on various subjects over about eight years.

The Information Commissioner rejected Mick Barnbrook’s complaint about the FOI which Bexley Council had refused to answer on the grounds he was vexatious. It was his third FOI each asking about very different aspects of the same subject which means that in law he was not vexatious. To be vexatious one must be repetitive.

The ICO decision was taken under the auspices of their Group Manager who doubled up as Leader of Stockport Council. How incestuous can these quangos get?

Mick sent a fat file to the ICO to make his case; they told him they were not going to answer because he was a racist intent on making trouble for a black man which Mr. Alabi is. The ICO reinforced their decision by saying that Bexley Council had submitted a confidential file on Mick and the rascism allegations could only have come from them. 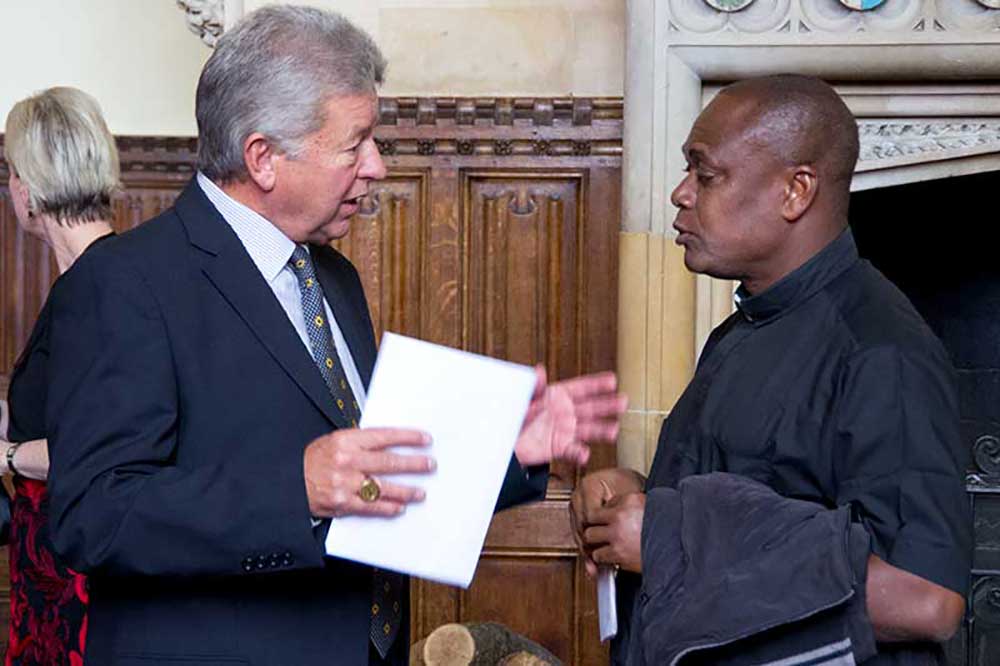 For the record Mick Barnbrook was a member of Bexley Council for Racial Equality while a serving police officer and a member of the Greenwich equivalent when working for that Council following retirement. As a police Inspector he was Sports Mentor to the murdered black teenager Stephen Lawrence and gave evidence in support of the Lawrence family at the Public Enquiry.

As if that was not enough Mick stepped in to support a black police officer who was subject to racial abuse from senior officers and was able to save his job at a disciplinary hearing.

But it suited Bexley Council to label Mick a racist because of his one time membership of the BNP.

Whilst Bexley Council refused to talk about the Alabi situation as befits a Council that thrived on opaqueness and dishonesty they did make changes. Mr. Alabi no longer showed up at Council meetings as Monitoring Officer and his title disappeared from official documents.

A couple of months later a replacement Monitoring Officer appeared on the scene, one Terry Osborne but she didn’t last long. HR manager Nick Hollier took her place and appeared uneventfully at Council meetings. 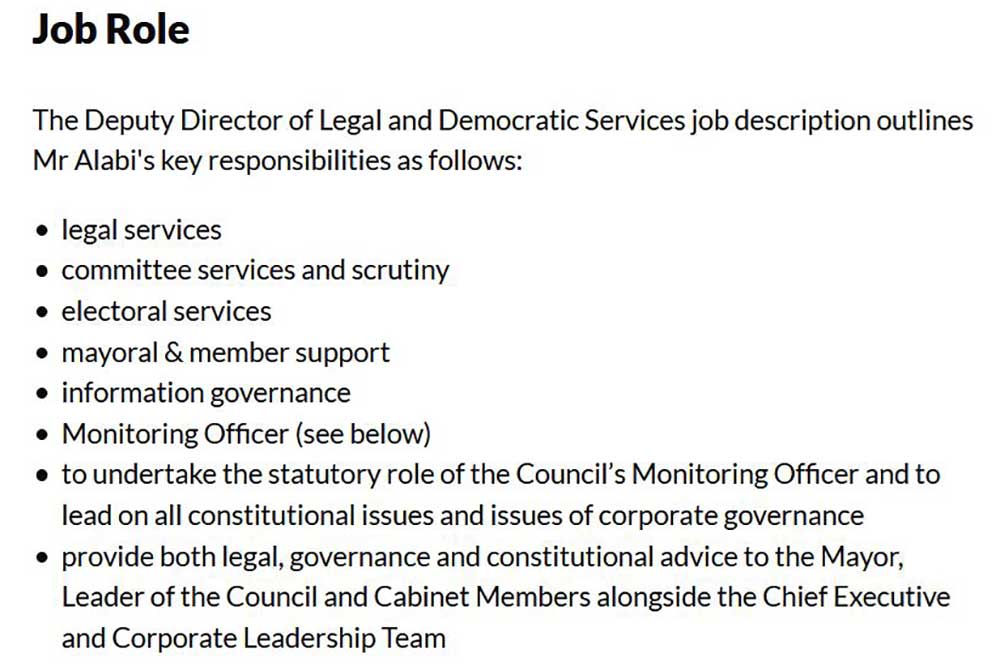 And so it continued or so I thought; but wrongly. The Danny Hackett complaint was thrown out by the one time HR Manager now Deputy Director of Corporate Services. No mention of Monitoring Officer.

Further enquiries revealed that Mr. Alabi has been reappointed to the Monitoring Officer job. He will either have acquired the requisite qualifications or Bexley Council has dropped their requirement of legal qualifications. Bexley Council can appoint whoever they like so there cannot be any law breaking as such but the question will be have they learned the lessons of the past and now realise that lying and covering up is not a sensible course?

As yet Mr. Alabi is not showing on the Law Society’s list but he may have requested the omission and it could, who knows, be time to offer congratulations.

My main concern is that my conclusion over the past couple of years that Bexley Council has cleaned up its act is mistaken. What if it is only a case of no one has been looking beneath the requisite stones?

This blog is far too long already but in for a penny etc.

I was once accused of racism. While at BT I became suspicious that International telephone calls were not finding their way on to bills. Long story short, I connected a computer to the telephone network and cross referenced the billing system. The machine gradually worked out where the leak was and pinpointed the sources of the naughtiness.

Out of 103 people implicated 102 were not native British. For programming a colour blind computer which took more than a year to come up with its answer which was totally unpredictable and during which time I had moved on to another job, I was labelled a racist.

So being labelled a coward by an anonymous Tweeter when I do not hide my identity is not really a big deal.