14 February (Part 2) - Bexley Tories. Still lying after all these years 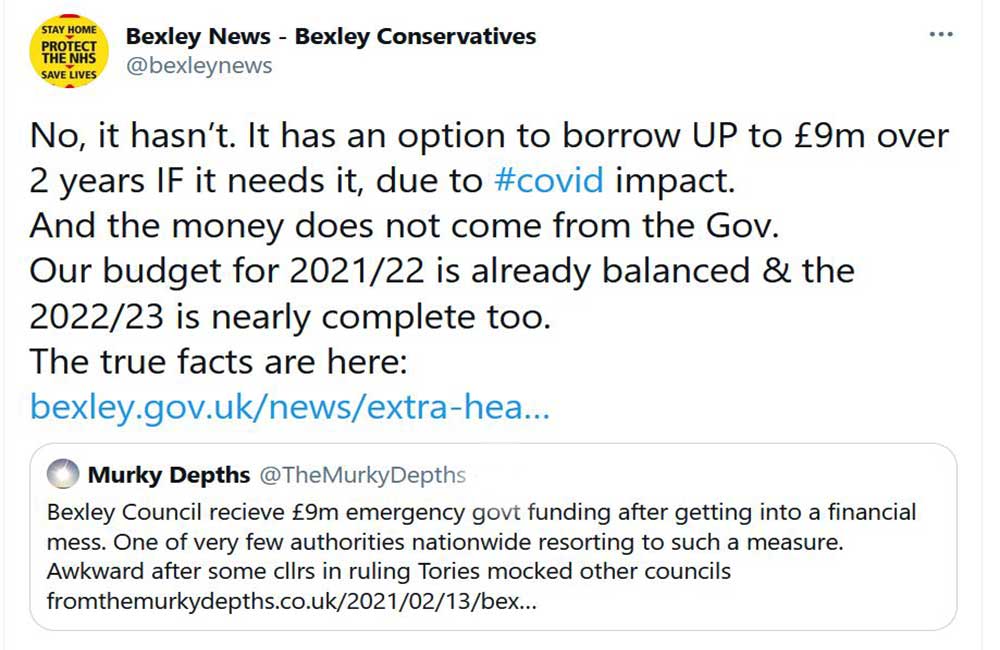 Wait for it; but most of this message from Bexley’s very own Goebbels Machine is true. Bexley Council has been given permission to borrow up to £9 million over two years and according to the Council’s Finance Director there is a decent chance that they won’t need it all. By cutting staff, libraries and probably things not yet fully revealed, next year’s budget is balanced. Well done Bexley Council for evading bankruptcy.

However to blame their problem on Covid alone is fanciful. Every Council in the country has been hit by Covid and some have been hit harder than others. Luton with their airport and Eastbourne with no holiday makers were featured yesterday. Bexley on the other hand is a run of the mill ordinary and recently “poorly managed” Council.

If Covid was the sole budget wrecker that Bexley Tories make it out to be why is Bexley almost alone in the country in needing the borrowing facility?

Bexley’s auditor made it very clear last October that Bexley was in trouble before Covid struck. <quote> “At the end of the year 1920 (sic) you did not have sufficient arrangements in place to close the gap and have sufficient plans to have financial resilience at that point”.

There it is; the auditor said that by March 2020 Bexley Council was already in trouble.

When Labour Leader Daniel Francis asked if Bexley’s problems would have happened without Covid, the shifty Tories had no answer for him. There have been mistakes galore, the cost of falling out with oneSource cost nearly £2 million. If oneSource was such a bad idea what sort of incompetent Council joins it? How many millions were lost by investing in the Erith Distribution Centre? How much was loaned to the unprofitable BexleyCo? Questions, questions!

… but two weeks ago referred to the receipt of additional non-ring fenced grants which had taken the pressure off things. On its website Bexley Council admits that Covid costs exceeded £6 million and confirmed the extra grants from Government to pay for them.

Click for Bexley Council’s report referenced in the featured Tweet. (It does not blame Covid for the crisis.)

The Murky Depths report also referenced in the Tweet. I am not sure it is correct to say that “Bexley have blamed COVID”. The Council appears to have studiously avoided saying that presumably because it would be very hard to justify in the face of what is already on the public record. The political propaganda machine masquerading as a news provider knows no such restriction and relies on false statements and poor memories.