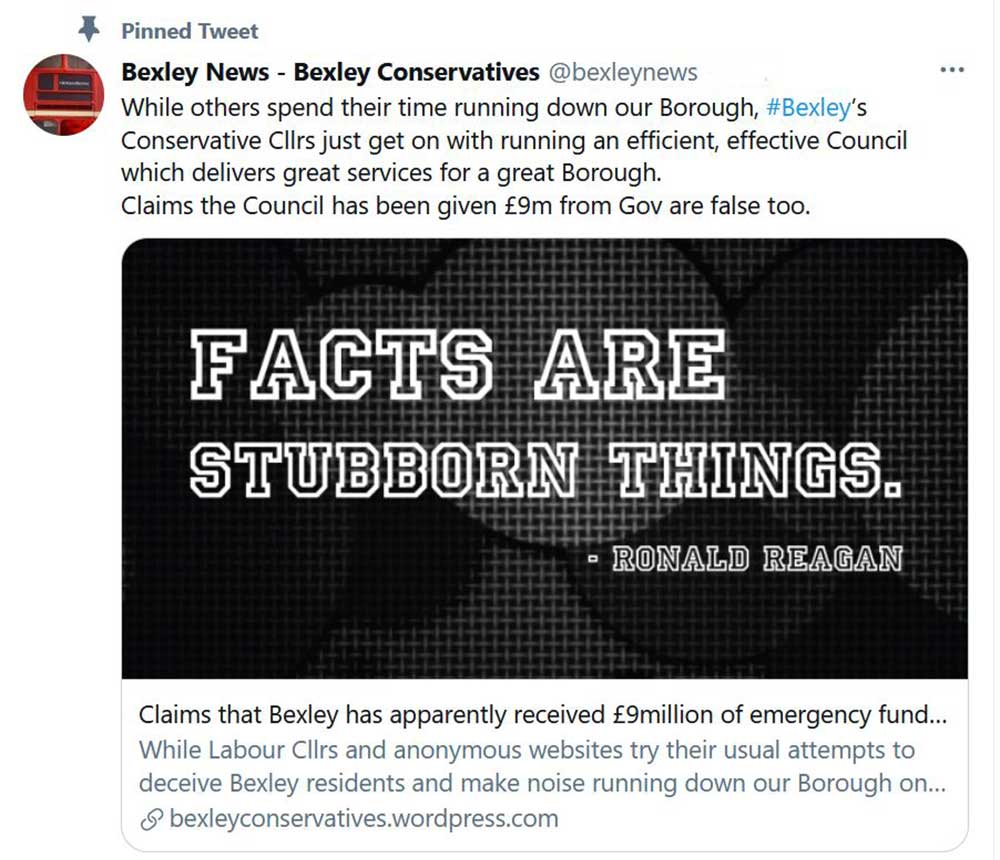 I was just on the point of abandoning the idea of a Part 2 for today when along comes @bexleynews with another Tweet, this time referring me to their website which debunks a few myths while adding a few of their own.

David Leaf, the office manager who oversees Bexley’s financial strategy is correct to say that some people who should know better have been inexact in their description of where Bexley will be getting its £9 million from and that the Council balanced the budget several months ago but from there he begins to go downhill.

As you might expect the Tories blame Covid and ignore what the auditor said about their March 2020 financial situation.

“As the Government has made clear, the London Borough of Bexley has been given this permission solely because of the pressures Covid has had on our Borough.”

That is simply a lie. The Government carefully avoided saying that the Capitalisation Order was in respect of Covid, they left it delightfully vague, not clear. Some Orders were in respect of Covid and some due to “very poor management”.

The Conservative blog refers to “an anonymous website which does not give any information about who writes it made a false statement claiming Bexley had received a £9 million bail out”.

I too noticed that the language on one of the local websites may have been a little careless but if I have guessed which one correctly the suggestion that the Tories do not know who writes it or funds it is calculated to point at some malign political activist. I could answer both questions and cannot be alone in that.

Even the BBC, see panel below, were a little slipshod in their reporting.

“And Bexley is one of many Councils being given permission to do this too, in recognition that local councils across the country and political spectrum have had to deal with an unprecedented pandemic and unprecedented costs.”

That’s not true either. Although several Councils thought of applying for a Capitalisation Order only four (not “many”) found themselves with no alternative.

The Conservatives go on about how individual Councillors delivered food and medicine to the vulnerable and there is no doubt whatsoever that some went to considerable lengths and at no small risk to themselves to help out. The Mayor himself did outstanding work.

But Bexley Council was headed towards a financial crisis long before Covid reared its ugly head. Their auditor said so and the Financial Director eventually owned up to the problem too.