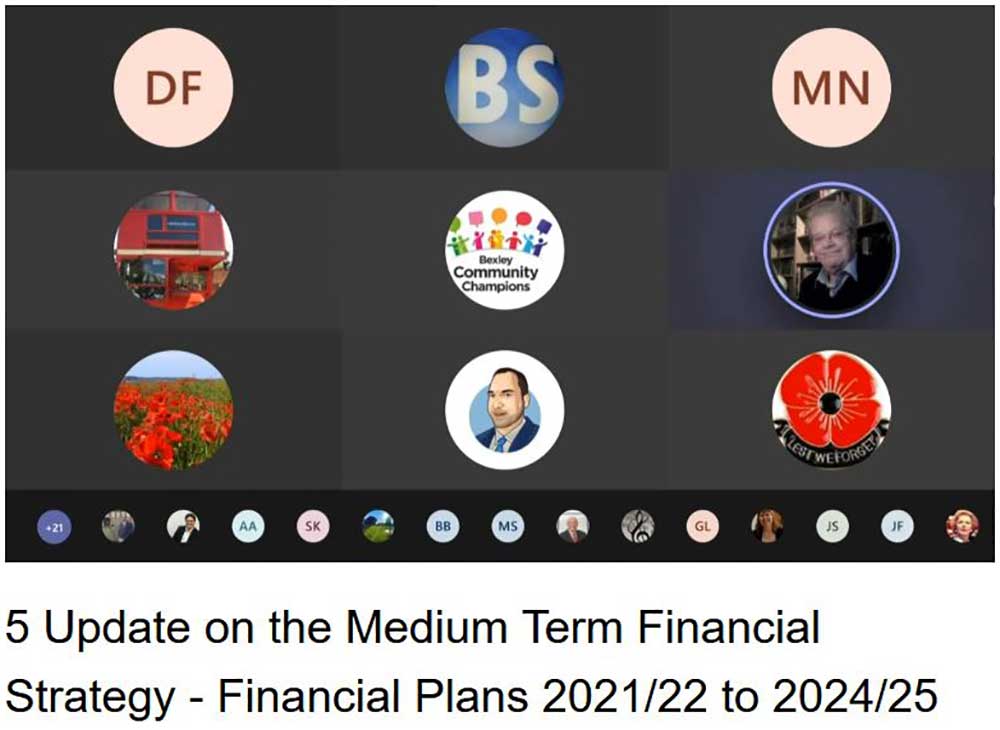 Item 5 of the Cabinet Agenda was the Medium Term Financial Strategy. The Leader kicked off by confirming that Bexley Council will be looking to raise Council Tax by the maximum permitted amount of 4·99% with Sadiq Khan’s even bigger (9·5%) impost on top.

The Finance Director said the Government has announced what Bexley’s settlement will be for the coming year and the Council will “if necessary use the Capitalisation option going forward”.

“The new year continues to carry financial risks due to the pandemic” and he implored Councillors to read his report, because, presumably they might not otherwise bother. Mr. Thorogood managed to say everything necessary in fewer than four minutes. Cabinet Member David Leaf felt it necessary to drone on for 14.

The Labour Party (I think he meant nationally) “is a disgrace”. He referred to Bexley’s lobbying of Government which had allowed the reallocation of some funds but Labour Councillors “have not once thanked us”.

The Council funding formula which treats Bexley so badly was the Labour government’s fault. The health grant is the worst in London (third worst in the country) and the fault of a former Primary Care Trust.

“We have to work with the reality we live in and the cards we are dealt” and Councillor Leaf went on to explain that he has.

“It has been tough but we have risen to it delivering quality services.” He gave examples of efficiency savings. Housing claims are dealt with in under ten days but Labour used to take six weeks. (Uncharitable individual that I am I always wonder why such efficiencies were not introduced years ago.)

He complained about the misreporting of the Capitalisation Order. It is not an emergency loan or a bail out. The BBC among others have been guilty of “shoddy journalism”. (Councillor Leaf has a point but ‘bail out’ is an easy quick shorthand to give readers a rough idea of what is going on.)

In reminding listeners that he had balanced the budget he returned to his favourite subject. “The naysayers, the doom mongers, the BBC and the Socialist opposition who try their best to talk down our borough. To mislead, to deceive and to frighten and scare monger while they hide behind Social Media while we stand accountable.” (@bexleynews anyone?)

Deputy Leader French had gone off line so Cabinet Member Brad Smith (Adults’ Services) stepped into the gap. He said what he always says. Improved services come from spending less but more wisely.

Cabinet Member Philip Read (Children’s Services) could think of nothing better to say than make a reference to “the doom mongers and their panic stricken warnings of catastrophe” and after a quick mention of a budget gap reduced from £20 million to zero it was back to the “doom mongering hysteria”.

Cabinet Member John Fuller, still struggling with his bathroom acoustic told us how the need for SEN Transport continues to rise significantly. 160 pupils up to 260 since the end of the first lockdown.

Cabinet Member Alex Sawyer referred to our “year of pain and sorrow and adversity” but “we are a plucky nation and will keep buggering on”. He heaped praise on the vaccination programme. “Where would we be if we had an anti-private sector government where Nanny knows best?” Probably working alongside Cuba, Venezuela and North Korea he suggested.

In a wife pleasing comment Councillor Sawyer (Communities) said that the Police is “not an aggressive arm of the state”.

What any part of his speech had to do with the Medium Term Financial Strategy I have no idea and who has been the biggest advocate of the Nanny State? Our current Government and its predecessors.

Councillor Craske (Environment and Leisure) was proud of the Council’s response to Covid but was another Cabinet Member who had almost forgotten what the subject matter was supposed to be. He spoke only of parks, litter, libraries, allotments, highways maintenance and the cinema before slipping in a claim that “investments are going up”.

Councillor French’s internet had been going off and on and was able to say very little but intriguingly referred to coming to the end of his term with the Cabinet.

The Finance Director confirmed that there had been a £400,000 reduction in the revenue budget but the Capital budget is increased. Overall highways is going down by £85,000 and this year was down by £986,000 on last year.

Labour Leader Daniel Francis said that 99% of Councils did not need a Capitalisation Order, not Havering, not Bromley, not Dartford, not Sevenoaks. They all had bad Covid too so why Bexley?

It was to keep the reserves up which probably doesnְ’t answer the kernel of the question. The Finance Director continued to support the Order.

Councillor Leaf demanded the last word and it was to criticise the Labour Leader. “He doesn’t understand budgets.” The diatribe continued for four and a bit minutes but it was the same old bile. He may well have pulled a still living rabbit out of the black hat and some congratulations may be due but why not leave it at that instead of saying “under Labour Council Tax would be twice as high” and going on about Labour wanting to spend even more of the reserves. Instead he constantly demeans himself?