6 January - You are supposed to be scared 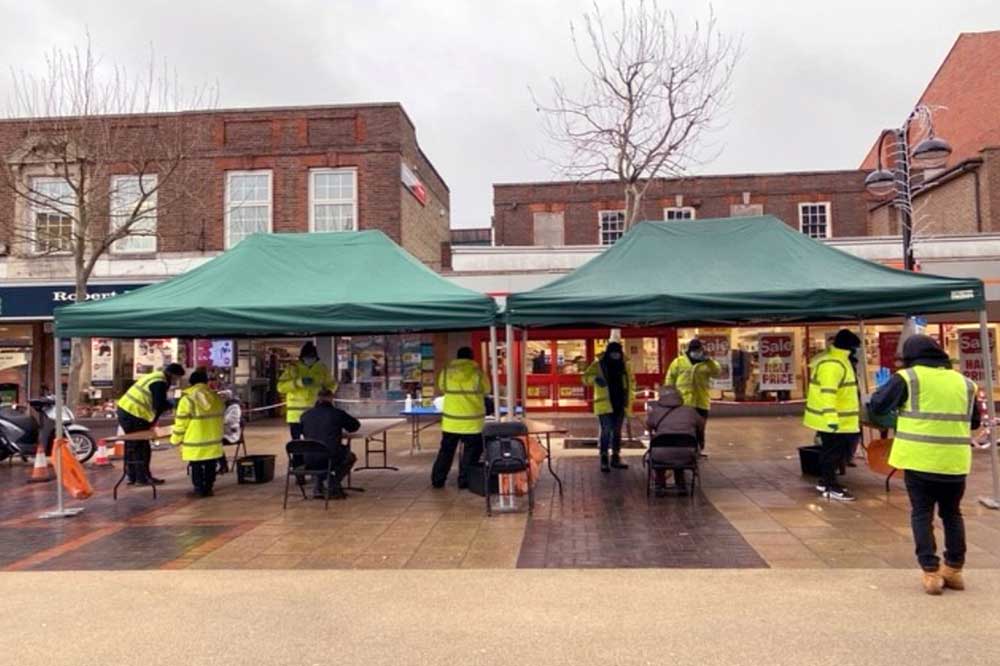 Bexley Council has quickly done what the Government asked it to do. Open a walk-in no questions asked Covid 19 test centre. They invite you to attend if “showing no COVID-19 symptoms but worried you’ve been in contact with someone who is? You can get a quick and easy test at Bexleyheath Broadway. The site is open from 10 am to 3 pm until 11 Jan. No appointment needed. Get your result within 24 hours.”

No thanks, I won’t venture out unless absolutely necessary. Better than getting a bus to Bexleyheath, mingling with people who have been in contact with an infected person, probably getting a negative result and then worrying about who you sat near on the bus back home.

A good idea probably for those who cannot avoid social contacts but I think it is safer for me to be more hermit-like.

Yesterday my telephone stopped working, couldn’t hear a thing and it took about half an hour to realise I had gone completely deaf in my left ear. My wax loosening liquid is nearly three years out of date but instead of going out to buy more I asked my support bubble friend to get some for me. She had to go to Tesco anyway so it halves the risk. There is no excuse not to work out the safest route through this crisis.

It won’t be long

I have equipped my bubble with a print out of the current regulations to carry in her car. With the police state looming ever closer it is probably a necessary protection against power crazed officialdom.

This newspaper headline doesn’t help by spreading misinformation, I’m pretty sure there is not yet a law that requires a mask to be worn when outdoors but maybe by the time you read this…

Scare tactics
Here’s another scary headline which purports to come from the Office of National Statistics. It has been repeated ad-nauseum today on the radio. Can it be believed?

One in thirty Londoners have Covid? Nasty. In my circle it is more than that so we are looking at something like 300,000 London residents with the bug right now. 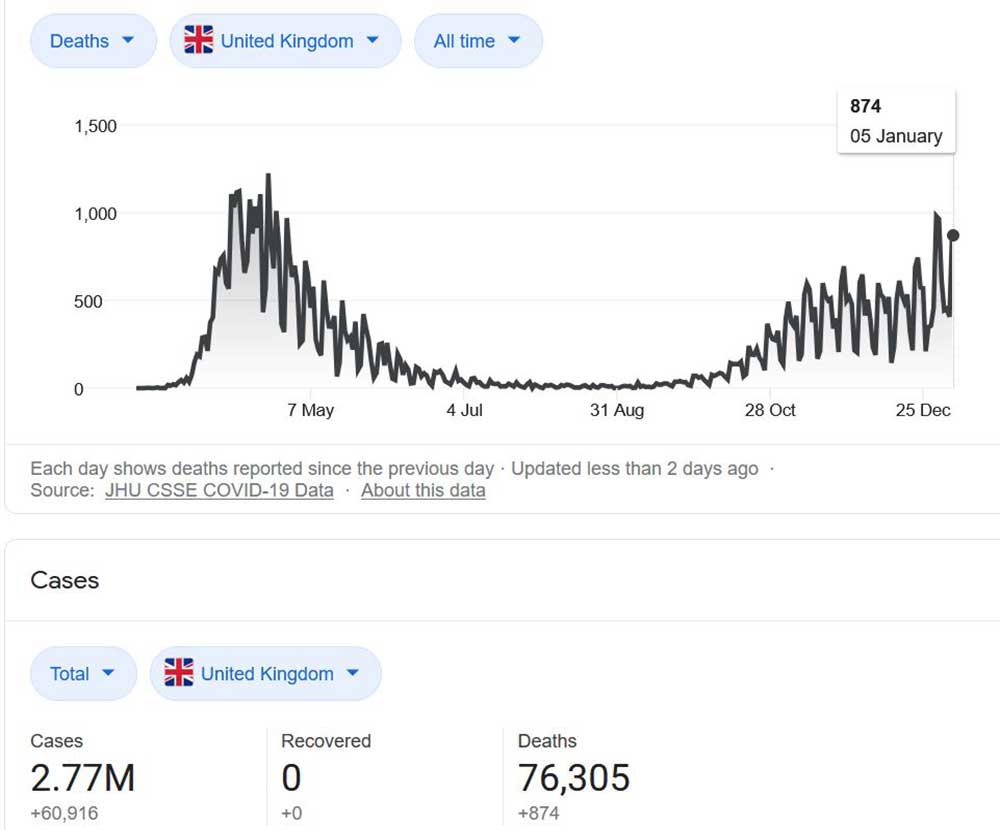 Somewhere in the back of my mind I remembered the figure of 3% of Covid victims die but it didn’t seem right. I searched for “percentage of deaths from Covid 19” and it brought up yet another Government webpage.

It said that there had been 2·77 million positive test results and 76,305 deaths as of yesterday.

Combine the two sets of figures and 8,478 Londoners are going to die in the next week or two. I’d put money on that not being true.

The flaw in the argument is that a huge proportion of the 2·77 million were false positives and very many of the 76,000 deaths were people who died of something else with falsified death certificates after the Government directed doctors and removed the need for certificates to be signed by two.

There is a health emergency right now, idiotic to deny it, but the Government’s published statistics are contradictory and probably designed to spread fear. The problem with that tactic is that a lot of people will see through the lies and the next step is to disbelieve everything Hancock and Co. says.

Social media
I don’t like any of it; it is an almost necessary evil run by companies grinding out their political agenda. I always found Facebook unfathomable and after being persuaded to download the mobile App it has become far worse. I almost never look at it now.

I keep Twitter fairly low key and delete things I post to it after a month or two. Nothing I say on Twitter is worth preserving. Last weekend I removed everything on the wrong side of December 2020, basically November was deleted, anything earlier was long gone. Then yesterday I found the whole of 2020 and the posts from years 2013 to 2015 restored but nothing in between.

How can you trust a company that keeps copies of everything that you told them to delete long ago? Answer; you can’t. If it happens again I will close the Bonkers Twitter account and start another. 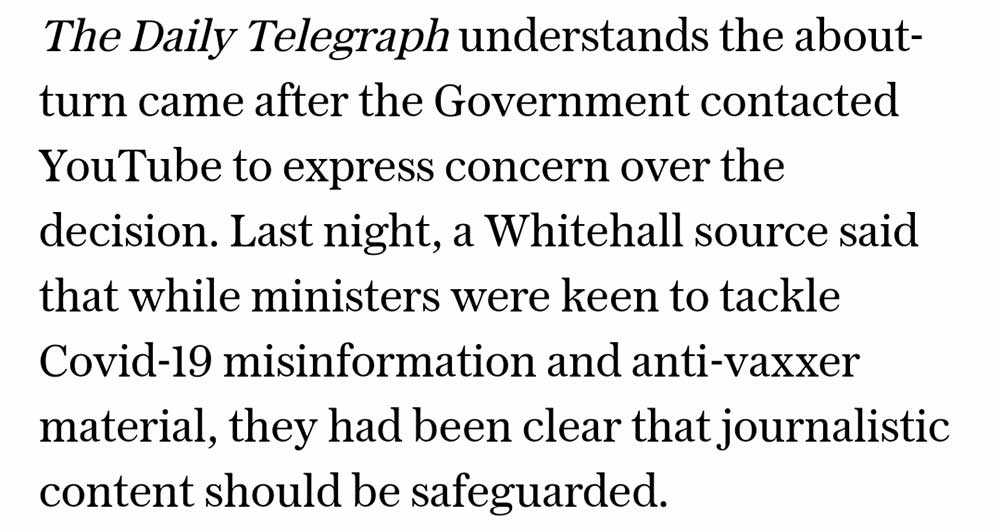 TalkRadio fell foul of Google owned YouTube yesterday. A UK regulated broadcaster following OFCOM rules lost their YouTube channel for questioning Covid stats. Good job I have nothing to do with YouTube or you might not be reading this.

Fortunately it looks as though our Government leaned on YouTube. After Michael Gove came out against censorship earlier the same day it could hardly do anything else.

Futile I know, but YouTube is on my Firewall blacklist. When would I have time to watch any of their stuff?

I’m amazed by the number of people who suggest that we would have better got through the past year with Captain Hindsight in charge. Hancock and Williamson and friends have proved themselves to be pretty useless but just look at who Starmer appoints to his front bench.

Last month the MP for Brighton Kemptown who boasts of his degree in Peace and Conflict on his website addressed his constituents as shown. Now he has been appointed to be Parliamentary Private Secretary to the Shadow Justice Secretary.

Presumably no one better available among Labour ranks.