In a conversation with my daughter, Alastair Morgan’s partner for the past 30 years, I bet her that she couldn’t go through more than half a dozen pages of the DMIP report chosen at random without finding something deeply shocking. An easy bet to win.

Readers seem to be finding the same. Before eight o’clock this morning the phone rang to alert me to an interview on BBC Radio 4 Today with Jonathan Rees, Daniel Morgan’s business partner in 1987. Thanks John, I agree it did in part seem to fly in the face of the facts.

Rees had been with Daniel Morgan on the evening of his murder and became a suspect. Naturally enough he was protesting his innocence this morning but he went further.

He denied corruption and he denied involvement with the planting of drugs in a car belonging to a woman fighting a child custody battle. 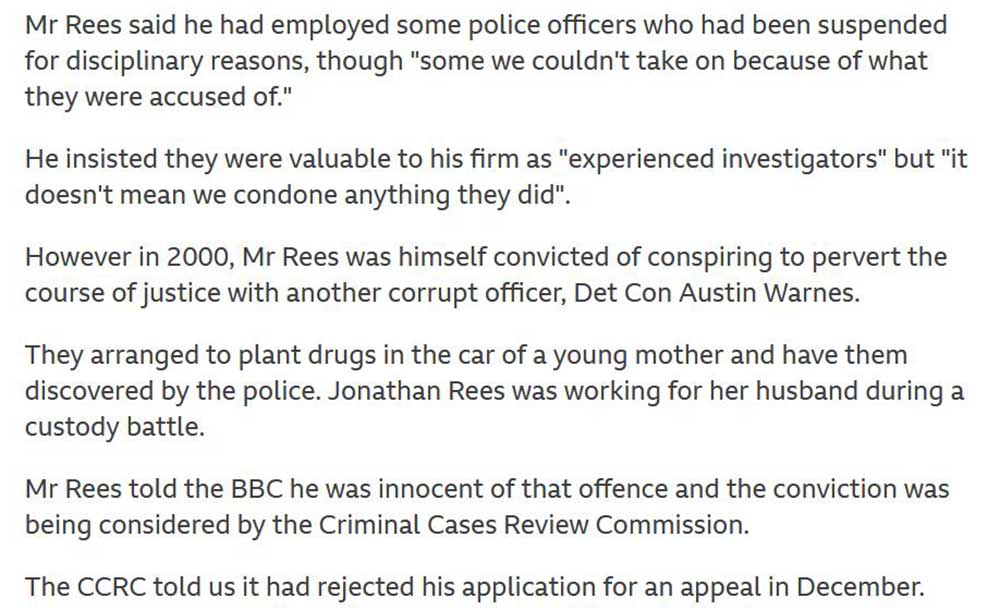 As you may read in the panel alongside (click to enlarge), Rees told Radio 4 that he was not only innocent of the crime but it was the subject of an appeal to the Criminal Cases Review Commission.

It was, but the CCRC rejected it last December.

That is not surprising; evidence of the crime was obtained with covert listening devices placed in the private eye’s offices, formerly Southern Investigations but renamed Law and Commercial after Daniel’s death. (Chapter 4 of the DMIP report.)

Incidentally, the very observant may notice that old reports on this case refer to five police investigations into the murder but the most recent ones, including today’s BBC report, say there were only four.

There is a very simple explanation for that. The Metropolitan police fibbed and misled the Morgan family during meetings. Institutional Corruption at every level.

Below is what the Daniel Morgan Independent Panel had to say about Rees’ involvement with corrupt police officers. Ten of them went to jail. Rees did not see his involvement with them as corrupt.

Extracts from DMIP report, pages 10 and 6.