Unfortunately the image of Labour’s budget amendment (below) was not readable when put up on screen last night and the copy below has gone through an amount of Photoshopping. Maybe that is proof that the Conservatives didn’t read it.

It is similar to Councillor Hackett’s in that it asks Councillors to forego their 3% increase to allowances but additionally rubs salt into the Capitalisation Order wound. It says that 16·8% of the overspend (about £450k.) was Covid related and 74·4% was due to budgeting inadequacies. Where the missing 10% went is not explained.

The amendment looks to redirecting the allowances allocation (£42,542) to community libraries, direct CIL funds to affordable housing and to reduce the highways maintenance budget by less than is planned. (The budget that @bexleynews claims has been increased.)

If that was not pushing their luck too far already they thought that the Council should also apologise to residents for their service cuts and job losses.

Councillor Borella’s speech in favour of the amendment was largely ignored. His reminder that Labour’s ideas for service improvements, dealing with the housing crisis (which were voted down) and how it was Labour that first put Bexley at the top of the recycling league, all fell on stony ground.

In a statement of the obvious he said that Bexley Council was attempting to blame all its financial ills on Covid. He quoted Robert Jenrick the government minister’s comment about “very poor management”. In Bromley, he said, their David Leaf equivalent spoke of the incompetence on display in Bexley.

Councillor Joe Ferreira (Erith) seconded the motion. In a reference to the allowance issue he said that “we are asking our staff to make the harshest of the savings and it is only right that we do our part too”.

Labour leader Daniel Francis gave a brief history of how the auditor, the Finance Director and himself had all issued warnings about the impending financial calamity.

Council Leader Teresa O'Neill referred to Councillors not taking the increased allowance in 2020/21 but contrary to @bexleynews contention earlier today, nothing whatsoever about 2021/22. Looks like their Tweet is mischievous; but you knew that anyway.

Almost needless to say Cabinet Members Craske and Leaf had to have their say with the latter referring to Labour’s “rank hypocrisy and “gimmickry” and said that when Labour gained power all their Councillors received various special responsibility allowances.

By contrast Cabinet Member Louie French was logical and restrained in his criticism of the amendment.

Councillor Sally Hinkley (Labour, Belvedere) tried to bring the debate back on topic with her comment that one party wants to increase expenditure on libraries and one wants to reduce it.

Despite Councillor Ferreira saying “the money is available” his follow up plea for common decency and fairness was rejected. 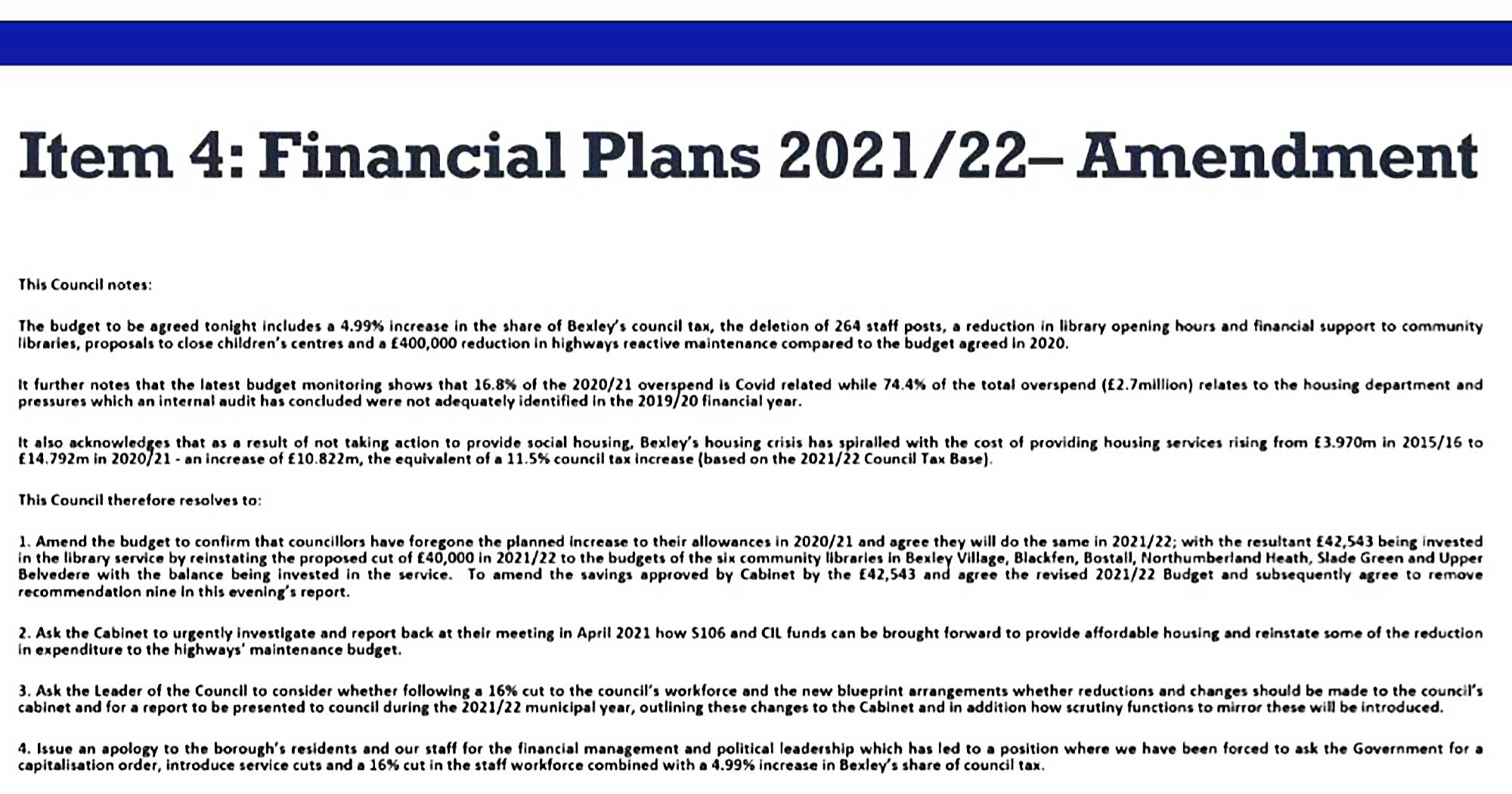