It is generally wise to assume cock-up over conspiracy and I am inclined to think that can be applied to the Councillor allowance issue too. 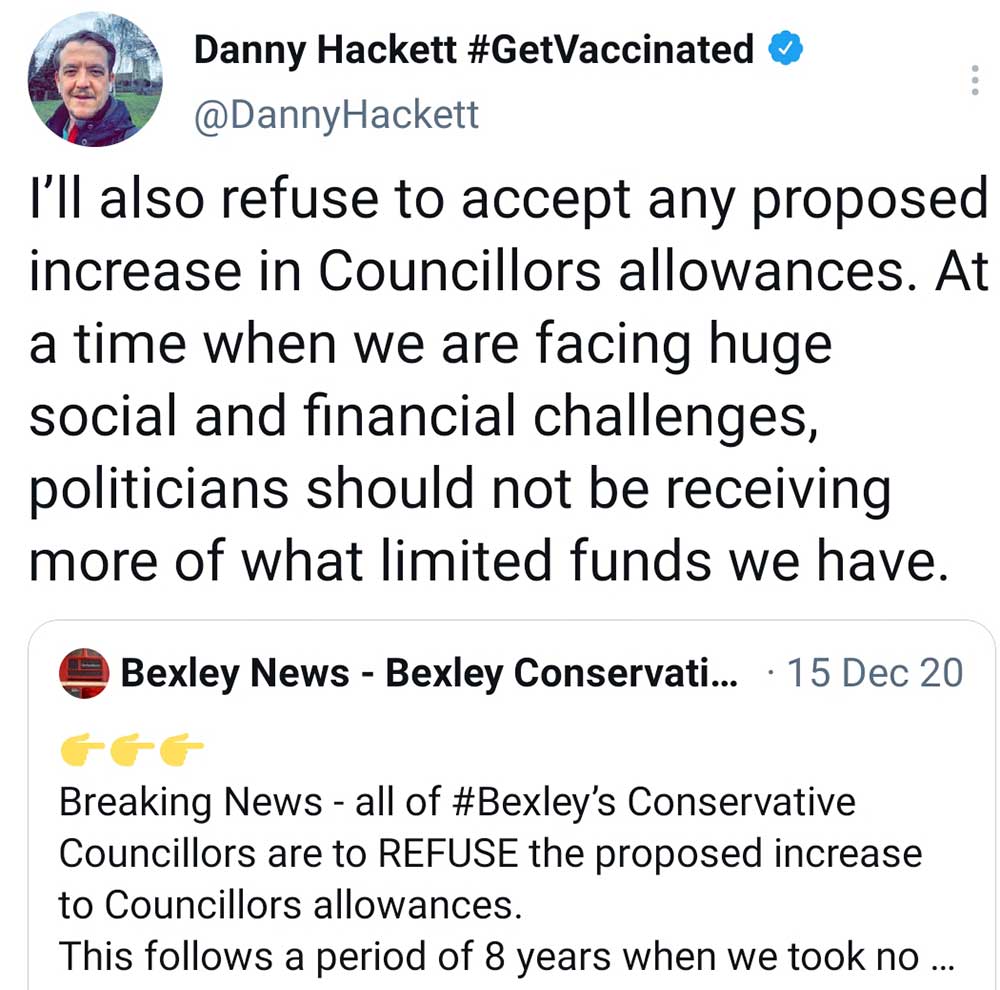 I have listened again to the recording of the mid-December Cabinet meeting and it confirms the @bexleynews claim that they announced at the meeting that Conservative Councillors would forgo their 2021/22 increased allowance. I have also been shown some internal messaging which proves beyond doubt that was their intention.

If anything it makes last Wednesday’s events even more puzzling.

Croydon Conservatives agreed to do the same on the same day but not their Labour colleagues. Maybe it was a more general Conservative edict.

Danny Hackett made the same promise as you can see in the Tweet alongside. It rather conflicts with a message received this morning which said he had not done so.

“Danny is actually the only person not on record until now to say he wouldn’t take the money.”

Mistakes and misunderstandings are widespread over recent days. Cock-ups everywhere.

Leader Teresa O’Neill must have known what Councillor Hackett had planned for Wednesday evening, certainly Council staff did because the budget amendment had gone to the Finance Officer and someone in Committee Services (Kevin Fox?) prepared the presentation that went on line. It is inconceivable that the Leader did not know about the budget amendment to freeze, not temporarily put on hold, the increased allowances.

She and others are now correctly saying that all Councillors (apart from Danny Hackett in some cases) had agreed to forego the increase. With so little between them surely someone who claims to successfully lobby Government could have made a deal with Danny?

Claiming that the increased allowance was never going to be implemented but instructing all the voting-fodder to reject the amendment which would make it ‘law’ will probably never be explained and one can only assume that someone failed to foresee the consequences.

Most residents who know anything of this farce will now assume that the Independent Councillor for Thamesmead East is someone who cares and Conservatives are people don’t care as much and reserve the right to renege on their promises.

I do not know if Councillor Hackett planned to outwit the Council Leader but if he did it was she who unnecessarily placed herself in front of the spotlight.

It has been suggested (not by Danny Hackett) that I should screenshot the various Tweets and Facebook posts from Conservative Councillors which say they have no intention of taking the pay rise - against the day they renege on the promise presumably. I see no need for that but it may indicate the extent of resident distrust. Lying has been a way of life within Bexley Council but it is confined to a small minority.

One Councillor reported me to the police for quoting what someone else had published knowing full well who made the innocuous comment. A total of three Councillors have reported residents to the police using evidence that they must have known was false. One Councillor told a resident that he didn’t know who I was while I was standing alongside both him and the resident. That takes a really accomplished liar.

A legal officer and a press officer made up a whole series of lies about several residents despite several Councillors certifying it was all nonsense.

And there I run out of anecdotes. @bexleynews is a special case but the real liars are few and far between.

When Councillors go public stating that they are not taking the pay increase then I have no doubt that that is what will happen. But I took the screenshots just to be sure!