6 March (Part 2) - Close together but so very far apart

In some respects Bexley Council’s Councillor Allowance ‘scandal’ might be seen as a bit of a storm in a teacup but there may be a lucrative principle at stake.

There is no doubt that Cabinet Member David Leaf made an announcement - pulled a publicity stunt if you prefer - at December’s Cabinet meeting when he said that no Conservative would accept a pay rise.

@bexleynews posted the news on Twitter immediately afterwards and a couple of hours later the Independent Councillor for Thamesmead East, Danny Hackett, confirmed (via Twitter, see yesterday’s blog and Tweet below) he would join them.

Here you are going to have to forgive me because I have mislaid my notification that Labour Councillors had done the same thing. It was noted in the BiB Cabinet report and if anyone is doubtful I would suggest a Freedom of Information request for the letter Labour Leader Daniel Francis sent to a Council Officer in December 2020.

One could therefore argue that all Bexley Councillors were singing from the same hymn sheet on Wednesday evening but things are never that simple if there is a political advantage to be spun.

In May 2020 before Bexley’s ruling party was taking their impending financial predicament seriously they agreed to take an increased allowance in line with the staff pay rises due to be paid in the October of that year.

Somehow or other the increase was not applied in either October or November and the Conservatives made their announcement at the next public meeting which you may think was a generous gesture. In politics there is always a sting in the tail and I know that it was a Conservative attempt to do the dirty on Daniel Francis. (I would rather not tell you exactly how I came to know that but there is a clue in one of Councillor Hackett’s tweets at the end of this blog.)

The May 2020 decision has never been rescinded.

On Wednesday of this week the situation was that the allowances had been increased by another 3% (more than what most staff were given) and the money to pay for it reserved. No Councillor had taken the 3% and every one of them knew that.

Councillor Hackett thought that the money should no longer be left doing nothing but spent on something more useful. The Labour Group was very specific and wanted the £42,452 to be handed over to the Community Libraries. The Conservatives wanted to keep it in the pot.

Since Wednesday the Conservatives have been assuring anyone who will listen that not one of them will ever take the money but as the finance people in Bexley have confirmed, any Councillor is free to ask for it to be paid out if they want it.

The Conservatives are alone in not wanting the money to permanently slip from their grasp.

My theory is that the Conservatives are looking to the future. Because the payment increase dates appear not to coincide with either the financial year or the municipal year it is not easy to say exactly what the annual allowance is at any one time but I will take £9,600 as a reasonable example for a reference point.

Suppose that Councillors voted for another 3% rise the following year and decided to take it because the financial pressures were reduced. They would walk off with £10,779. An increase of £1,179 overall.

However if Councillor Hackett had his way and the allowances were frozen instead of simply not being taken the increase would be £288. (All example figures.)

Maybe I have misunderstood how it works but when I asked Councillor John Davey (Conservative, West Heath) about it there was no answer apart from the pretence that Labour might be taking the increase.

If the amendment to reallocate the allowance money to something more worthy had been accepted the Conservatives would be smelling of roses but their base instincts to spin have backfired spectacularly in this case. Not very clever when there may not be anything much keeping them apart. Except for the prospect of an extra thousand a year some way down the line!

While the Conservatives are content to leave £43k, hanging around doing nothing their motives will always look suspect. 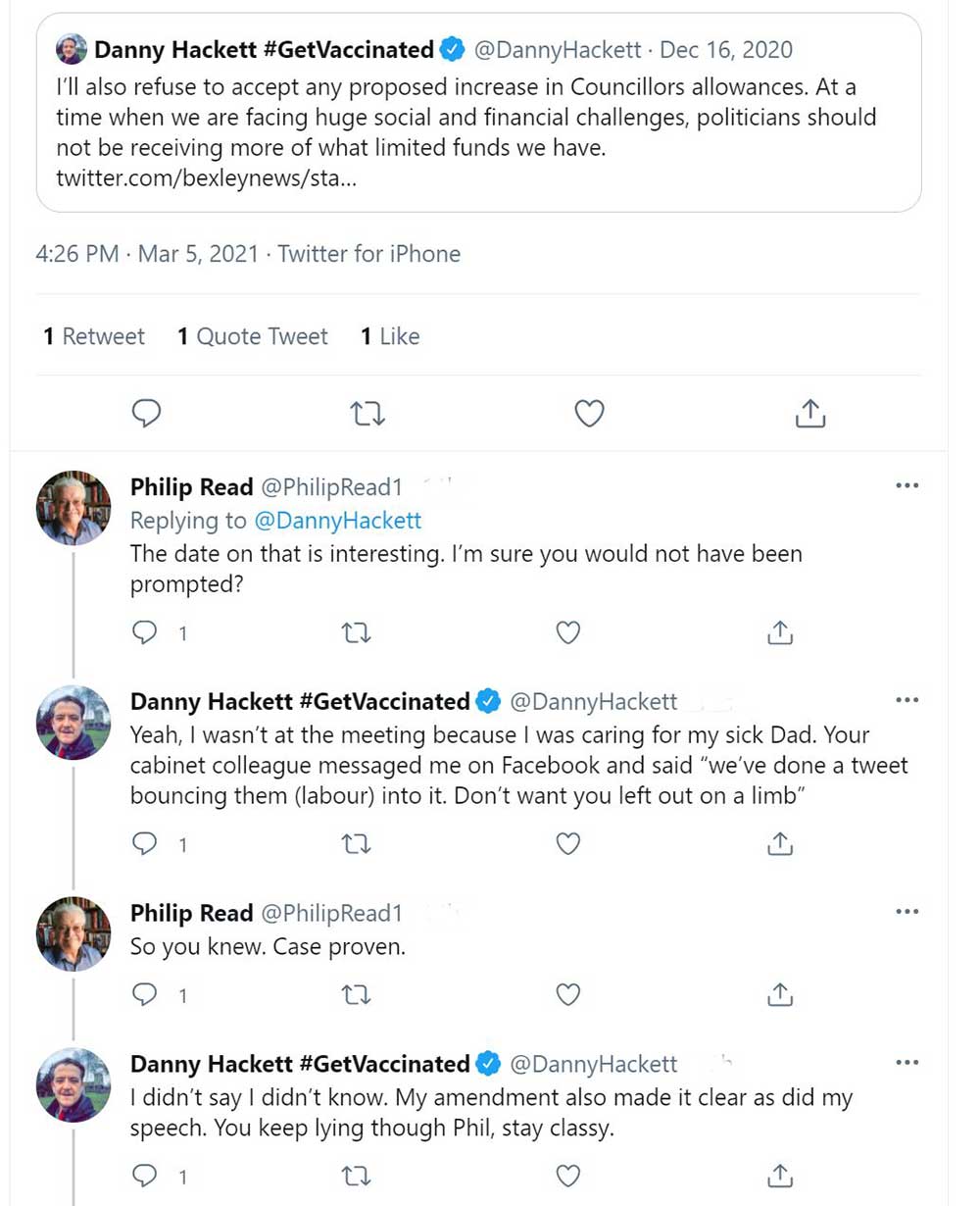 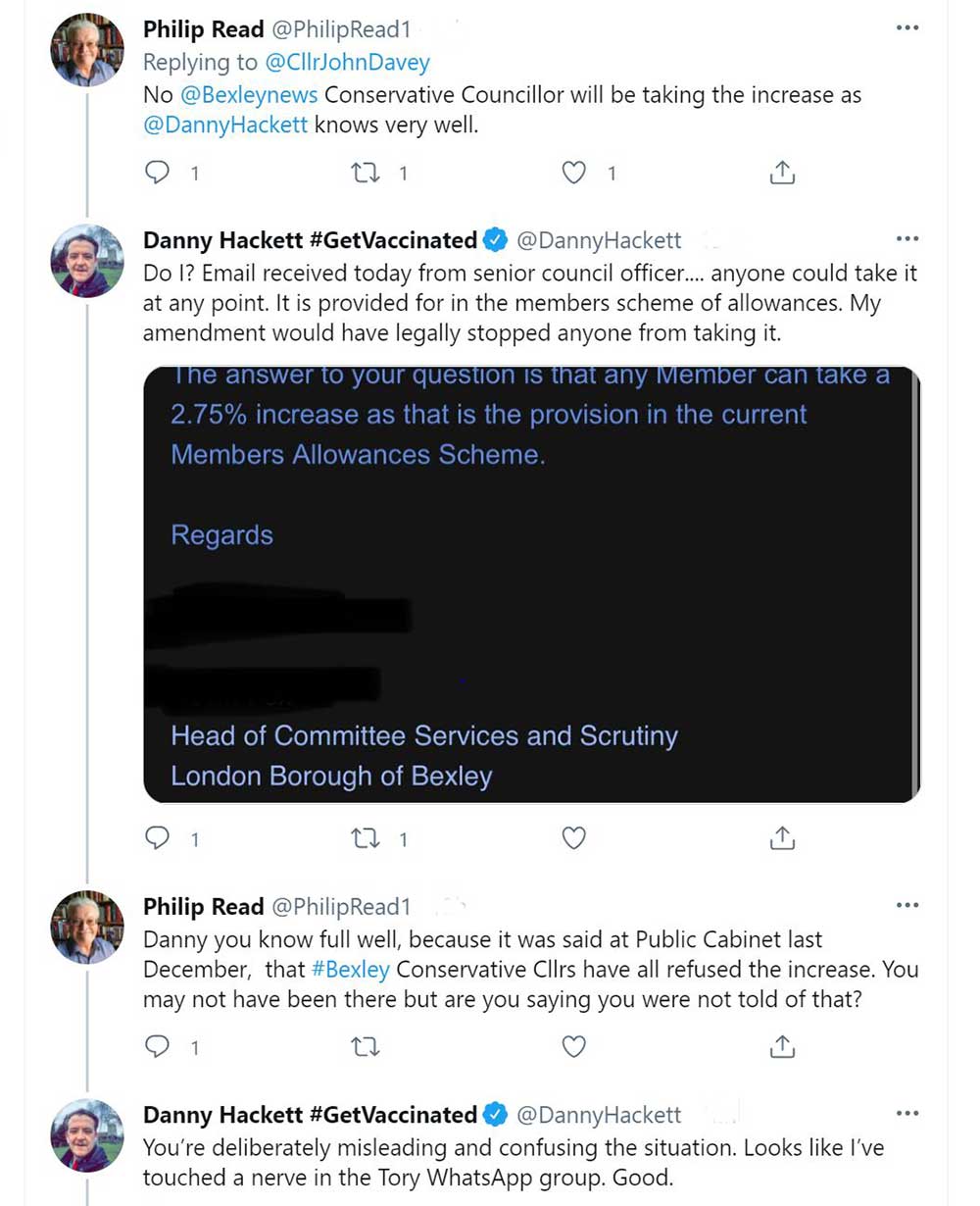 And if you care to look for yourself there is worse.