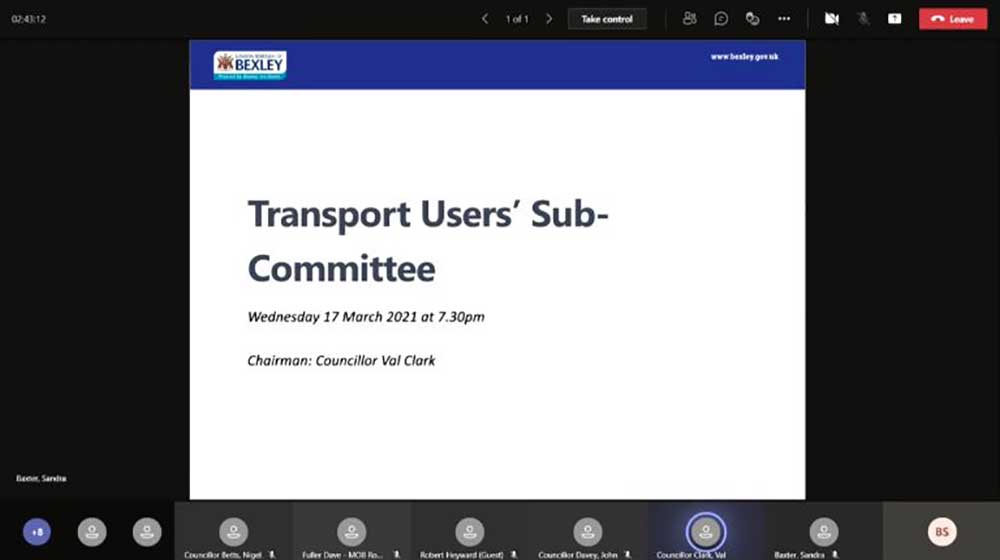 The Transport Users’ Sub-Committee meeting started in the same way as Places the night before, with a minute’s silence for the School Crossing Patrol man killed while cycling to school.

At the last Transport meeting there was a request for a pedestrian crossing on Hook Lane and Mr. Bashford (in charge of highways) offered up several reasons why that might be difficult but he volunteered to take another look. As he had forecast there was no room for central refuges because there were so many dropped kerbs and the sightlines together with parked vehicles make the use of volunteer operated speed guns (Community Road Watch) problematical. However there is one possible site which will be considered.

The Chairman, Councillor Val Clark, repeated her assertion that parked cars tend to reduce traffic speeds - and my information from the family expert (†) is that she is right.

It was reported that in addition to the tragic loss of the Crossing Patrol man last week there has been a further resignation; this time at Belmont Primary School. Funding of patrols comes from TfL and their decision on its continuation has been “imminent for the last five or six weeks”. if the money is not forthcoming crossing patrols might cease at the 15 sites (soon to be 12 due to resignations) where the service is still maintained. 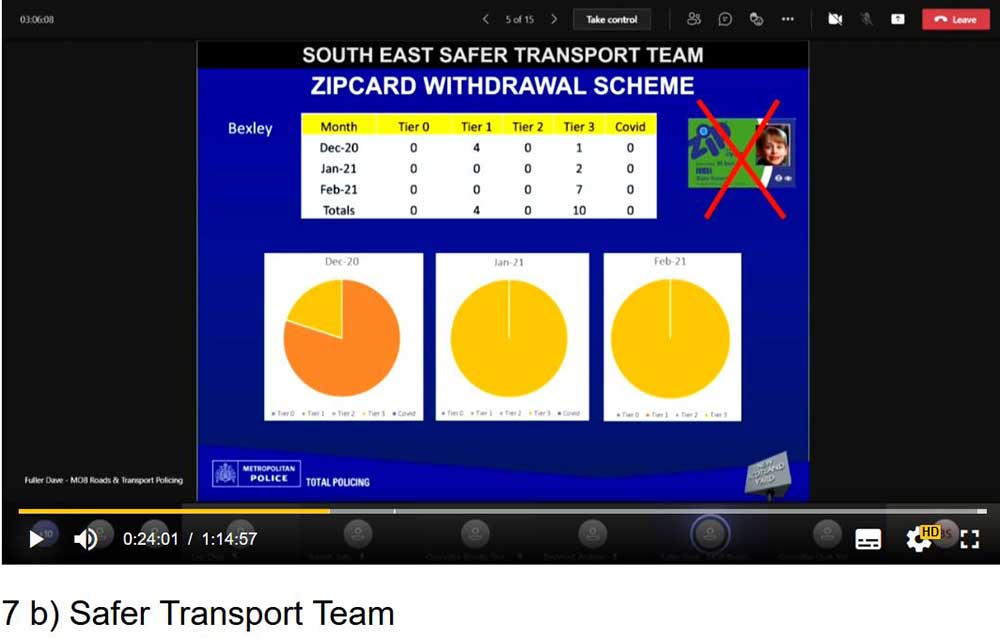 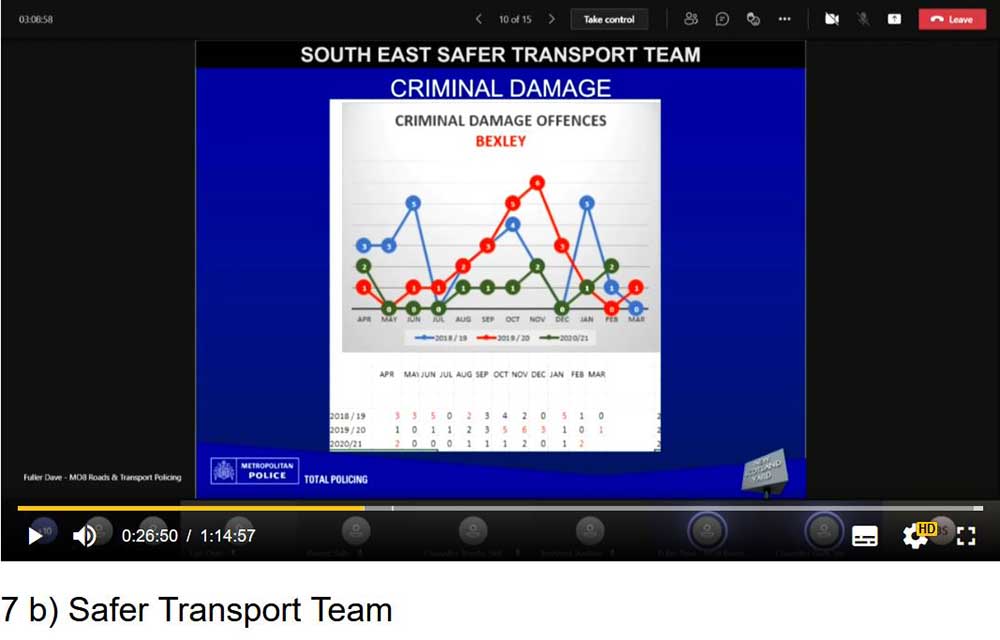 The police reported a pretty good situation on the buses. School children are almost universally observing the corona virus rules and crime levels remain low and the threats to remove travel passes are few and far between.

Low crime is not no crime. In the first two months of the year there has been one theft and one robbery in February, none in January. Two cases of criminal damage, only one incidence of violence, public order (including swearing!) four in February and two in February and two sexual offences (exposure).

Councillor Stefano Borella complimented the rail representative for the improvement work done at Slade Green station but mentioned things that still needed to be done there. “The bridge is in an appalling state.”

He also asked what Southeastern’s timetable plans were for when the lockdown is lifted. He was told that currently 70% of services were running for 20% of normal passenger load. In May capacity will be raised nearer to 80% mainly due to longer trains. Reliability has been very high and the aim is to maintain the improved level.

Network Rail was not available to answer the bridge question. There was no news available from Southeastern about electric vehicle charging in station car parks. 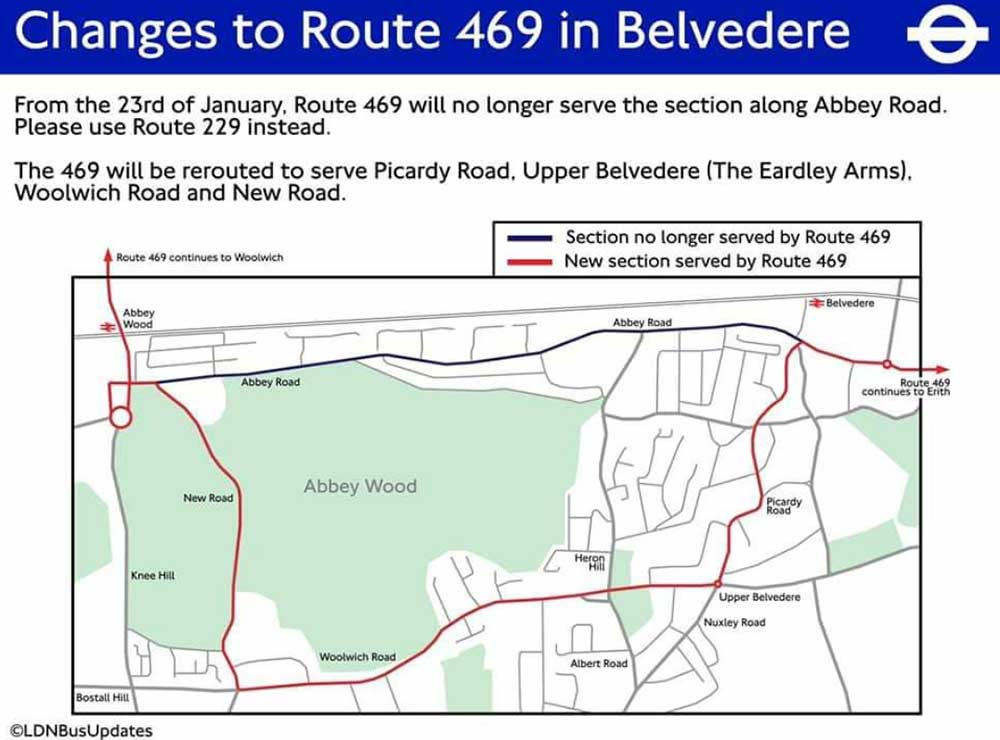 Two months ago the 469 bus was said to be imminently rerouted along New Road and there was some debate about the need to do so before the Elizabeth Line opens.

At last night’s meeting the TfL man blamed the confusion on someone posting misinformation on Facebook. This may well be so but it was TfL that  put out the original incorrect announcement. See image alongside. The news soon spread.

The 469 continues to run on the established route along Abbey Road and from today TfL hopes to clarify that situation on the Bexley page of its website.

The cycling rep. Mr. Heywood asked about the cycling fatality, not even the precise location or direction of travel is known, he said. Cabinet Member Craske had not been informed either.

Mr. Bashford believed the cyclist was heading south along Bourne Road when he “fell into the road” a little to the North of the Bexley Village library” and was hit by a passing car or van. That is as much as I know”.

Some interesting statistics on Covid non-compliance were provided; all mid-June 2020 to the present day. 436 police operations around bus movements in Bexleyheath. Just under 4,000 engagements about no masks or improperly worn masks. 95 claimed exemption. 325 people refused entry to buses for refusing to wear a mask and 146 people already on a bus thrown off. The number of Fixed Penalty Notices is unknown because the figure has been lost. Reading between the lines it was very few.

Councillor John Davey (Conservative, West Heath) said the plastic barriers around school entrances were frequently knocked down and asked that the issue be given some attention. He was told that a contractor was supposed to maintain them twice weekly.

Chairman Val Clarke reported that the last of the Safety Team members “who had been holding the fort on her own” will leave the Council at the end of the month and wished her well in her new job.