Probably the most interesting part of Thursday's Communities Scrutiny meeting was the report on the Covid situation in Bexley and it must be summarised here before the statistics go out of date. 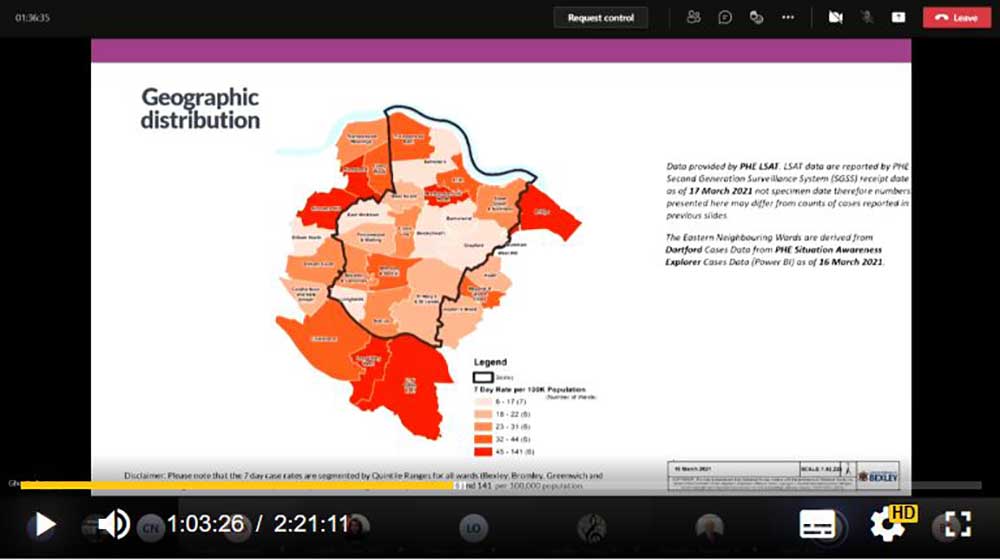 Chairman Councillor Alan Downing asked the doctor to be “very very brief bearing in mind that Councillors get right up to date stuff on our emails”. Clearly he had forgotten that it was a public meeting. He is not very good at this Chairman lark is he?

Doctor Ghosh said that his was “a good news story”.

There was a slight increase in cases when the schools reopened “because of the really high volume of testing going on in schools which includes their families and bubbles, staff and their bubbles etc.”.

“There have been 57 [positive] cases in the last seven days. 14 schools have one of more positive cases.”

Some Council wards have really low rates and some no cases. (See image. Lightest best.)

Everything is “in the same ball park as neighbouring boroughs” including Dartford but Doctor Ghosh expected to see an increase around Easter.

Smoking, hypertension, obesity, mental health and alcohol have all proved to be risk factors for Covid. Waste water is being tested as it accurately indicates the direction in which infections within the general population are going.

The doctor frequently referred to presentation slides which included figures which he did not repeat. The slides are little better than a blur when webcast. Useless. If only Councillor Downing had remembered that it was a public meeting and allowed Doctor Ghosh to speak freely.

The Director of Adult Care took over…

As already noted “second doses are already put aside so anyone expecting a second dose will get it”. Mr. Rowbotham said he was “on tenterhooks” about the supply position. As the vaccination programme was ahead of schedule the shortage was unlikely to affect plans.

An almost inaudible Labour Councillor Nicola Taylor (Erith) asked about low take up among the ethnic minorities. The Director said he was concerned about “take up in those groups which are the most hesitant and who happen to be the groups predominately at risk from Covid and well represented in lower socio-demographic groupings including care workers. We have a whole programme to tackle hesitancy. £200,000 has been allocated to support hesitancy work”.

Dr. Ghosh said that in Bexley the younger you go the more ethnically diverse the population becomes and they are in Slade Green, Erith, Belvedere and Thamesmead East. The reasons for hesitancy are varied and there is a team actively pursuing the problem. Unfortunately, he said, some will reject vaccination whatever is done but there will be an Outreach Bus accompanied by “Door Knockers”. Some refuse on the basis of the loss of income while away at the vaccination centre.