I am not a habitual Council complainer; two reasons, one I have not seen the need for a long time and secondly I learned long ago that it is a waste of time.

In 2012 I complained about Councillor Craske abusing an elderly gentleman at a Council meeting and he was immediately excused. The minutes of the meeting published three months later proved the excuse to be made up nonsense and I appealed the verdict. I was rewarded with a totally different excuse.

A year later Councillor Cheryl Bacon was ill-advised to close a public meeting to every member of the public present because one of them had asked to audio record it. Next day someone should have said “sorry, we made a bit of a mess of that” and the incident would have been forgotten a week later.

Strictly speaking the closure was illegal so Bexley Council felt compelled to make up excuses to cover their backsides for a one-off mistake that no one could ever have been able to do anything about.

Among their various lies was that I had rampaged around the Council Chamber like a loon despite four Councillors (both parties) and six members of the public present providing written evidence that I had said nothing and not moved from my seat.

I complained about my name being blackened by the liar who wrote the Council’s statement about me. (It wasn’t Councillor Bacon.)

Mr. Hollier, now an even bigger shot in the Council than he was then, rejected my complaint and reprimanded me for having the temerity to suggest that any Council Officer would lie. (Presumably a sure route to promotion at Bexley Council.)

Councillor Bacon’s minor error generated so many lies from Council Officers that a year later the police sent a file to the Crown Prosecution Service. It’s not the original sin that gets people into trouble, it’s the cover-up that does it. 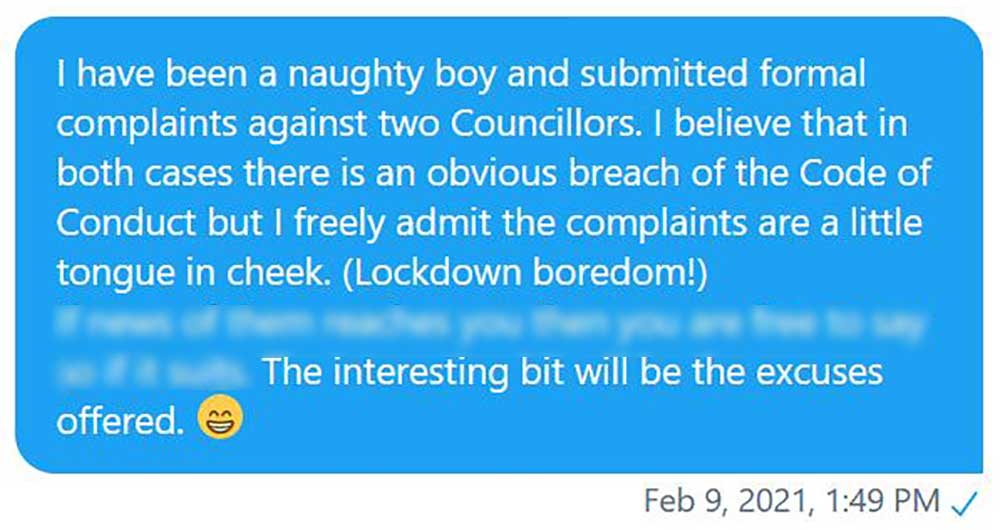 And Bexley Council appears to have learned nothing over the years.

On 9th February, egged on my someone I had better not name, I complained about two Councillors who were in my opinion breaking the Councillors’ Code of Conduct.

As I indicated in a Twitter Direct Message to another friend, it was a minor matter and my interest was primarily in seeing what excuses the Council might come up with. (†)

It is looking ever more likely that Bexley Council is incapable of dealing with even the simplest of complaints in a straight forward manner.

My February complaint was not acknowledged and neither was the reminder four weeks later.

Tomorrow the Code of Conduct Committee meets and the Agenda includes an item that could just possibly be mine.

“February 2021. Complaint regarding alleged breach of the Council’s social media policy by Members - re Twitter. Ongoing investigation.” (See below.) 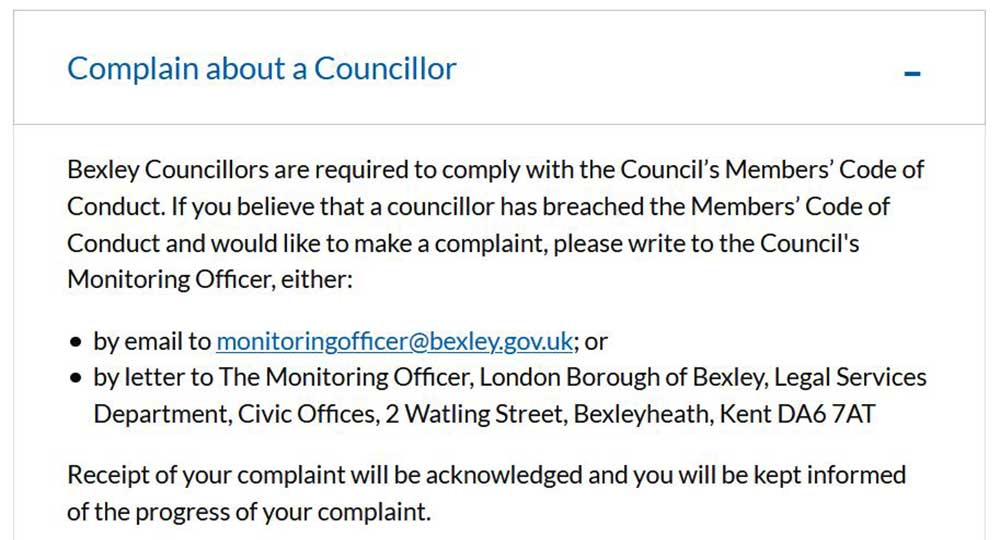 I may be wrong of course, but how can I know when the Monitoring Officer neglects his duties and ignores me?

My complaint was really minor and I did not much care whether it was upheld or not. It could have been defused within 24 hours and there would be no story, but refuse to do so and it makes a blog.

That is the direction in which Bexley Council appears to be going and if so it throws more light on the incompetence of senior Council Officers. Maybe it is special treatment reserved for me; I don’t know, for breaking the seven year complaint moratorium.

It’s an excuse to complain about the Monitoring Officer. That’ll be another blog.

† Words removed because of the very small risk of them offering a clue as to who the friend is.