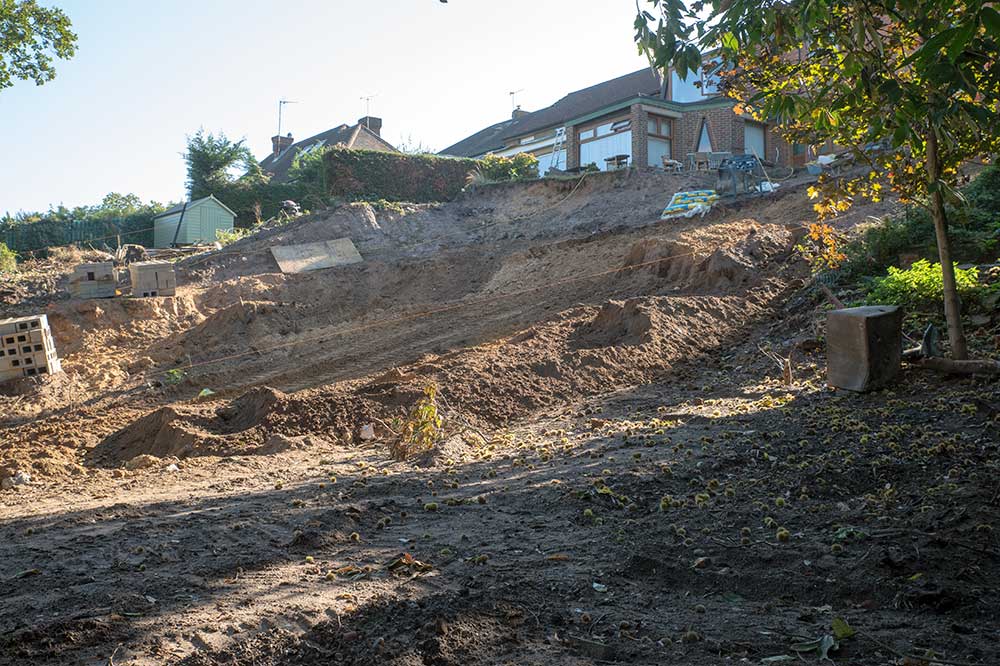 Following yesterday’s revelation that the existence of the concrete bunker at 238 Woolwich Road has been condoned following appeal the next door neighbour stated that it was allowed because it was felt “the development doesn’t have enough of an adverse effect on neighbours”. What sort of lunatic came to that conclusion?

The neighbour had to leave their home thanks to the developer and the lunatic plus those in Bexley’s Planning Department who recommended the retrospective application for approval.

The Planning Committee members (Councillors) were powerless to stop the wrecking of the woodland. One might ask, what is the point of democracy when individual dictators in Bexley and Bristol can overrule them?

It is either proof that the Covid panic is well and truly over or that those who govern us are bonkers but on Thursday I am invited to enter the nearby old peoples’ home to cast a vote for someone who might be slightly less bad than the other lot.

Casting the family circle quite widely I am related to three ladies in care homes, two dementia one not, whose spouses have not until very recently been able to visit them at all and a year ago were being deliberately put in harm’s way by a government that thought it was a good idea to export Covid infected patients into their homes.

One of the aforesaid ladies was given no chance of survival from her Covid in April 2020 but her two children were refused permission to see her. Miraculously she did survive but a year later her children are still not permitted to see her. If the care home rules haven’t prevented it the travelling and overnight stay rules have.

I am not sure which of my two voting rules to apply on Thursday. One is never vote for anyone who cannot be bothered to pitch their case via a leaflet through my letterbox. None have so should I simply stay at home?

Patel has shown her true colours by backing unlawful police action and the spineless one has dictated that I have not been able to legally see any close family member since 1st February last year when there was a dual birthday celebration.

Messages of dubious worth.

I saw my son and daughter during a minor relaxation of the rules last September but including my granddaughter the number of us reached seven. Boris Johnson would label me a criminal. At Christmas I was unable to see them again but instead made a day trip to have dinner with my sister. Something that Johnson allowed if family lived within walking distance or one of them owned a car. Buses and trains not being an option on Christmas Day.

I packed my pyjamas and made use of them. I am a criminal again. Three times in the past year I have mended by daughter's computer or phone line. BT changed her number by accident and caused chaos. I became a triple criminal in order to keep her working from home.

Some people have suffered far worse than I have because Johnson is happy to inflict maximum pain for minimal gain. Not once has he been able to provide evidence that masks, social distancing, scotch eggs, ten o’clock curfews and similar nonsense work or have a significant impact.

The news media points us towards India which spent its money on space exploration instead of health facilities and not Florida where they did both. It’s been psychological warfare which has up to a point succeeded. (“I can never eat from someone else’s plate ever again.” God help us!)

All the evidence points to the vaccinations being the reason for Covid effectively going away in this country. Johnson denies it and insists on me being isolated from distant family for another seven weeks. I have heard of five Covid related suicides of people who had some sort of tenuous relationship with myself but applying the same relationship standard to Covid deaths; only two. One definitely contracted in hospital.

I will never forgive Johnson and his unthinking cronies for any of that. Who will get my cross on Thursday? Still thinking about it right now but not Khan or Binface.

Recycling abandoned
It is now two weeks since Bexley Council withdrew the recycling bin which serves the four houses opposite mine. They really donְ’t care do they?

Health care abandoned
On 26th March I managed to get a telephone call from a Consultant at Queen Elizabeth Hospital over something which should have been checked twice in the previous year but wasn’t. I was referred to my GP and after jumping through the inevitable obstructive hoops was seen on the 30th. He ordered urgent scan appointments for two different things and appeared to be more worried about them than than I was.

Two weeks and a day later (14th April) I was in QEH for the two scans and told that the GP would be in touch. Has he Hell? Absolutely nothing from Bexley Group Practice and their e-consult booking system doesn’t make provision for enquiries such as mine.

Small beer in the grand scheme of things, I still don’t think my problem is as bad as the cautious doctor may have imagined but it is another illustration of government failure to realise that Covid is not a worse killer than cancer and heart disease. And as my friend Mick Barnbrook revealed on Twitter this morning he is still in hospital four weeks after emergency admission following at least nine months of neglect. It has put his life in serious danger. According to an earlier @sleazebuster Tweet he is suffering from Loeffler endocarditis. Look it up. Very nasty. Good luck Mick.