I really should learn not to offer to do DIY work for people who live 75 miles away. I thought the job would take a full two days but the travelling time and the slowness that comes with old age made a mockery of that. Fortunately someone at Highways England put up ‘Minimise Travel’ notices on most of the motorway gantry signs which helped enormously and the job is now done. A mere five days of sore hands and aching knees.

An added bonus of absenteeism was not being around to feel a little election result comment might be necessary. It seems to me that while the Labour Party plus its own small circle of friends, Guardian journalists, teachers, bishops, heads of quangos protecting their jobs etc. continue with their woke agenda, they are doomed. No one outside their own perpetually loyal group believes in eradicating British history, apologising for it, knocking down statues, knee bending, political policing, mobs threatening death because of a cartoon, 100 different genders and ad infinitum. The vast majority of ordinary folk, many of them in the north, have no time for it and vote accordingly. In the south of England there are some signs of a reverse drift. Our own Stefano Borella notched up more GLA votes than any of his predecessors. Maybe if I had seen his leaflet I would have been tempted. I decided who to vote for only 20 minutes before the deed was done and all four of my choices lost. At least Stef didnְ’t stand within view of my front door, leaflet in hand but not delivering.

I would be tempted to think that both parties had decided to keep me in ignorance for fear of adverse comment but both Dave Tingle (Labour) and Lisa-Jane Moore (Conservative) sent me their leaflets with polite and friendly covering notes. Councillor Lisa Moore is off to a good start on Bonkers.

With the Daniel Morgan Panel due to report in a week’s time maybe I should mention Len Duvall the GLA member for Greenwich and Lewisham. Apart from kind words from the Morgan family’s own constituency MP, Len Duval was the first elected politician to believe that the police might be up to no good. It was him who bit by bit nudged the case upwards from where it crept into the public arena after the Home Office in the shape of Hazel Blears MP had, like her numerous predecessors, cocked a deaf ear when surrounded by Met Police corruption.

The News Shopper’s website still has coverage of Len’s involvement.

Len Duvall is one of very few heroes of the Daniel Morgan case. Even Mick Barnbrook, scourge of bent politicians and coppers, thought he was a good guy after an unplanned meeting while holidaying in the same resort. By the way, Mick has Tweeted that he has been discharged from St. Thomas’ and is back home with his rare heart disease on a pills for life diet. A much better result than seemed likely a month ago.

Back to Bexley politics, I found it nauseating that Conservative Councillors were congratulating others elsewhere who I know without much doubt to be supremely incompetent or possibly corrupt. Perhaps they follow the Hazel Blears school of politics.

Parking issues
I am not sure it is something to be proud of but I do not recall ever paying to park in a Bexley Council car park which in turn means that any money I spend goes outside the borough. I have vague recollections of going into the Mall multi-storey many years ago and the one outside Sainsbury’s more recently but neither are operated by Bexley Council.

When I was new to the borough I bought furniture in Welling and Eltham and in both cases parked without charge in the street outside the shop. Both shops have since closed down.

I went to Erith today to visit a well known electrical shop. I got to the car park not far away and tried four times using two machines to get a parking ticket with no luck.

A notice suggested I download an app to my 2G mobile phone to get a ticket. Obviously that was not possible so I tried the other way using a standard telephone number but there was no O2 phone signal in the car park.

I know mobile signals can be bad in out of the way places so I grabbed my back up EE phone and got the parking sorted out but there were no signs that said the machines did not work. It also cost me to use the back up phone and frankly the whole thing was a right pain in the rear.

When I eventually got to the shop I told them it was too much hassle driving there and that if in future I needed anything from them requiring a visit, I would make other arrangements. This situation is a shame as the organization concerned is one I have used often and found to very good.

My knowledge of Council car parks is so poor that I don’t know of one in Erith. Morrison’s has one and I do wonder whether my correspondent meant to say Northumberland Heath where the car park is close to an electrical shop. By coincidence I used that car park for three minutes yesterday (see below) but after 6 p.m. when it is free. The cash machines looked to be neglected and dilapidated.

Council Accounts
Bonkers lost its tame accountant several years ago but I am reminded that the period in which Bexley’s accounts will be open to inspection is fast approaching.

• Your chance to discover how much of the Boris loan has been spent.
• Is there enough cash in the bank?
• Is Housing still in crisis?
• Who got the big bonuses and payoffs this year?
• Has BexleyCo made any money?
• Is it really true that Covid wrecked the finances of only one Council in London?
• What was the price of the divorce from Havering and oneSource?
• Is outsourcing worthwhile? Capita, Serco bin strikes, the Mitie mess?

One must be thankful that Bexley poached oneSource’s Finance Director who was making such a resounding success of that organisation.

It’s all about me 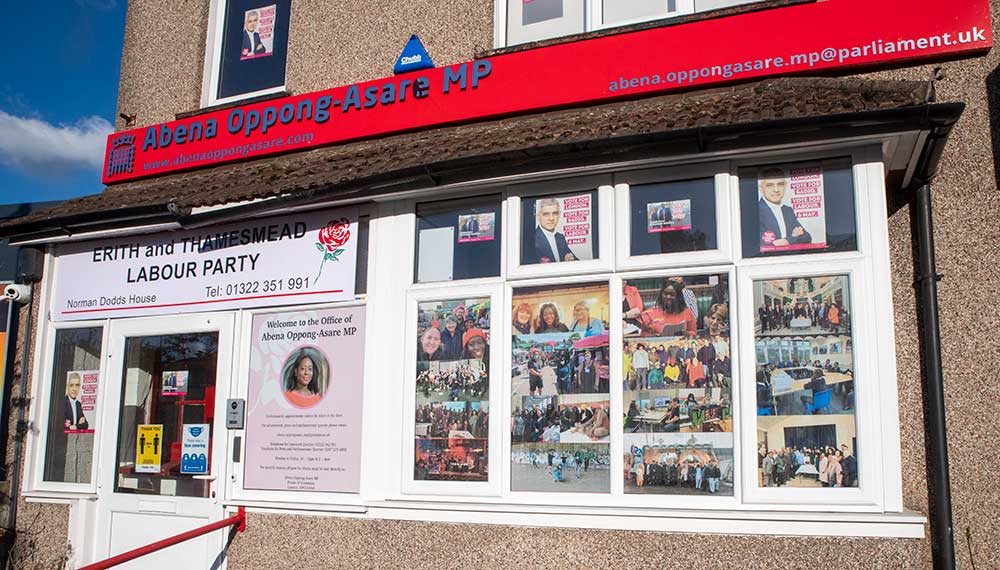 After Norman Dodds House was revamped in the image of the MP for Erith and Thamesmead some would have said it looked somewhat smarter than before but maybe not any more.

The whole of the front window has been covered with photos of Abena Oppong-Asare and it looks as tacky as Starmer’s front bench.

The end piece
It is nearly a month since Bexley Council withdrew the paper recycling bin from the four houses opposite mine. The Council said it was contaminated and needed to be cleaned. How long can that take London's top recycling borough?

It is four weeks since I had the two emergency scans a GP ordered two weeks earlier but I have heard nothing more. The hospital scan man said my GP would be in touch to tell me the result. He has not and calling in at the surgery and the phone number and email address on display there have got me absolutely nowhere. Anyone know Nikki Kanani’s email address? Someone needs to shake her out of her complacency.