13 May (Part 2) - Democracy stirs from its Covid slumbers

There will be a Full Council meeting in Bexley in two weeks time, the first to be held in the Council Chamber for more than a year. Pity the poor devil who has had to make the arrangements which absolutely must comply with Government regulations however stupid they may be. 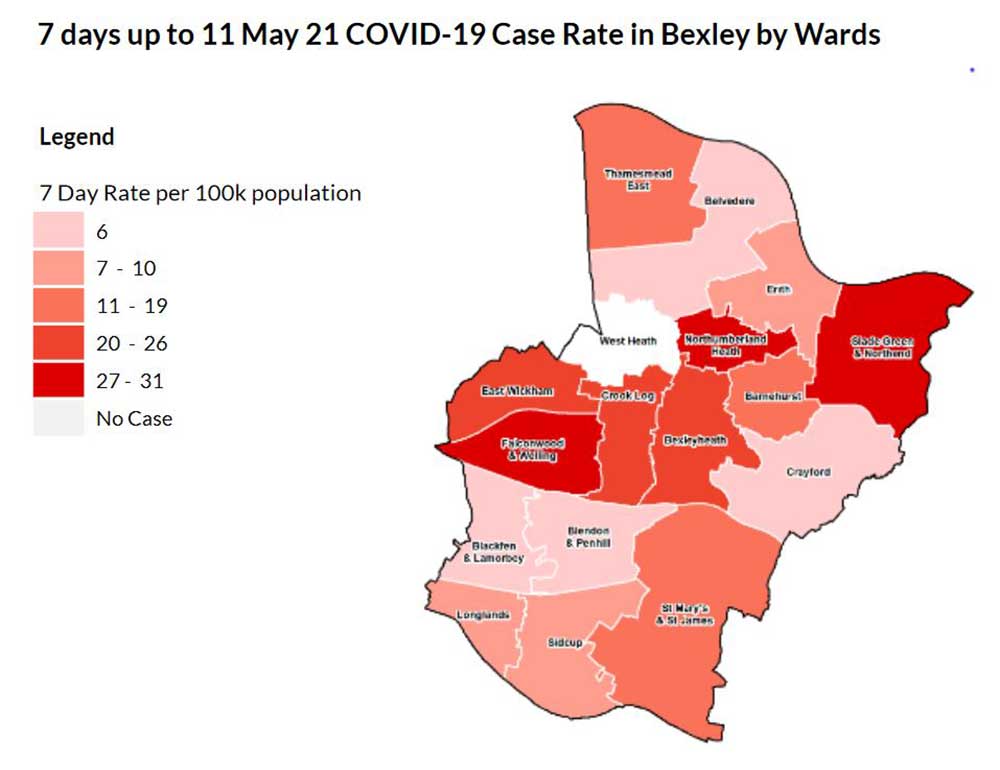 Bexley’s Covid cases have reached the giddy heights of 30 over the past seven days (14 per 100,000 of population) and 0·2% of tests have shown up as positive.

The 100,000 rate in individual areas comes up with numbers that look strange because none of the wards have anything like that level of population. West Heath scores zero and six more wards are in single figures which will translate to less than one case per ward. East Wickham next door to West Heath scores more highly which probably indicates that the statistics are all a bit random and low enough not to be a worry.

So with Covid levels well below normal flu levels what is Bexley Council forced to do to comply with the regulations? I have attended meetings in the past coughing and spluttering and no one took any notice beyond the occasional kind Councillor fetching me water.

If coming by car Councillors must mask up as soon as they leave it but not use the car park entrance. Front door only but not just any old door, it must be the one on the right. Sanitizer provided.

They must go directly to the Chamber; no nipping off to offices allowed.

At the end of the meeting a socially distanced single file through the rear doors to the car park.

The usual debating area will accommodate 21 Conservatives, six Labour Councillors and the Independent. The excess must sit in the public gallery without the benefit of microphones.

It is all inevitable, given the rules, and almost certainly futile. With the infection rate standing at 14 per 100,000 how many is that out of 45 Councillors plus a handful of senior officers most of whom have been told to stay away?

Will my hope that the Mayor should be given a second crack of the Mace come true and who will lead Labour now that Councillor Francis has called it a day? There must be lots of talent to choose from, after all one Labour Councillor who did not make a huge contribution was deemed to be shadow Cabinet material by Kneel Starmer.

David Leaf looks to be the obvious candidate for Deputy Leader,

Presumably it is pretty safe to assume that no member of the public beyond Councillors’ families will be queuing up to witness the annual ceremonial Mayor selection.