1 November (Part 3) - When political activism runs out of control

You’d need a heart of stone not to feel sorry for Councillor Francis canvassing for votes in Old Bexley yesterday. The weather was horrendous as I drove to Bromley mid-morning with wipers going full tilt, but at least the sun shone later.

Then there’s the fact that statistically speaking he is the underdog and some of his supporters do his cause no good at all. Daniel would have had no idea that his perfectly reasonable Tweet would lead to a deluge of Twitter comment that started in the early evening and continued well past midnight.

It began with East Wickham resident and black cab driver Bill saying that he was inclined to vote for Richard Tice. Labour supporter Sammy asked what the Reform Party had ever done for Bill. Well nothing obviously; the new party has never won a Council seat or a Parliamentary one.

My mistake was to side with Bill who I have noticed several times is from very much the same political mould as I am. 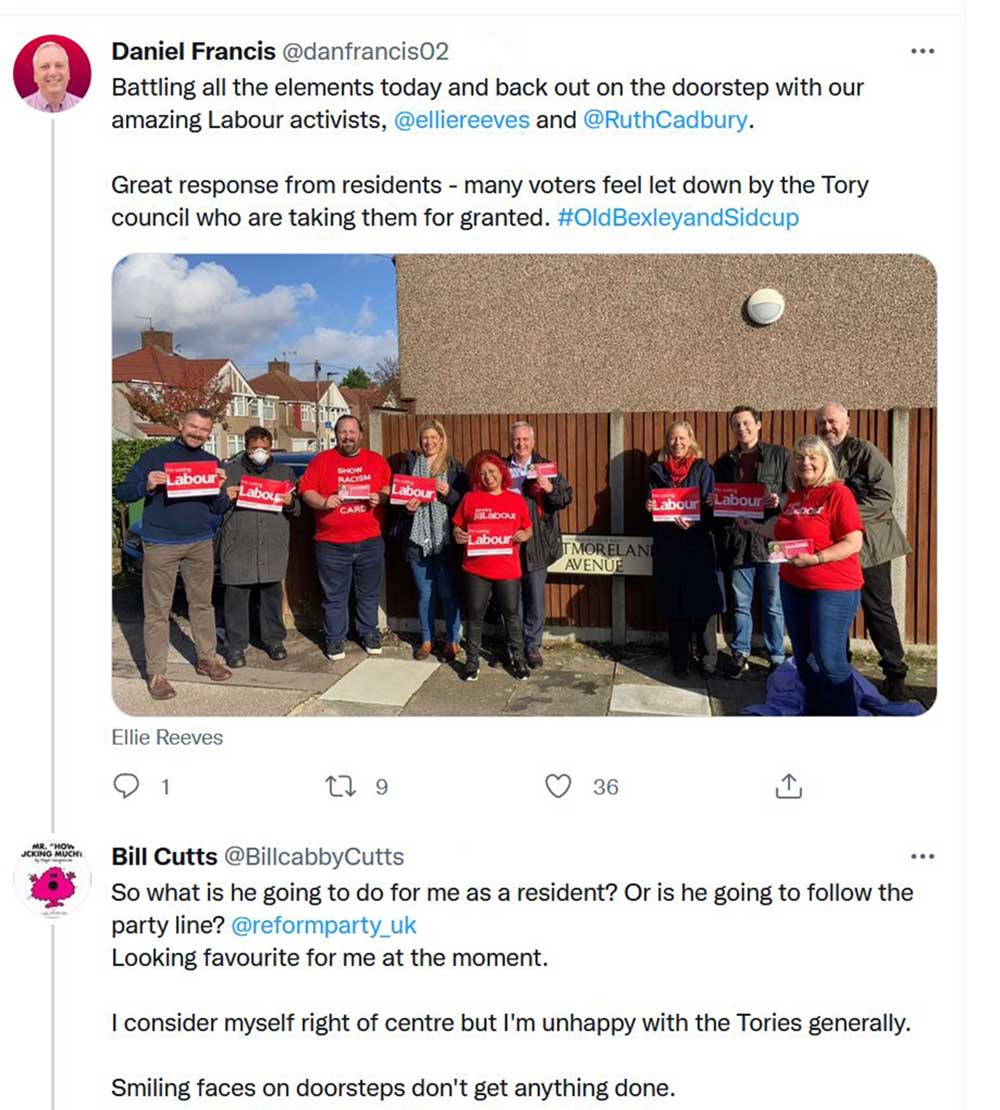 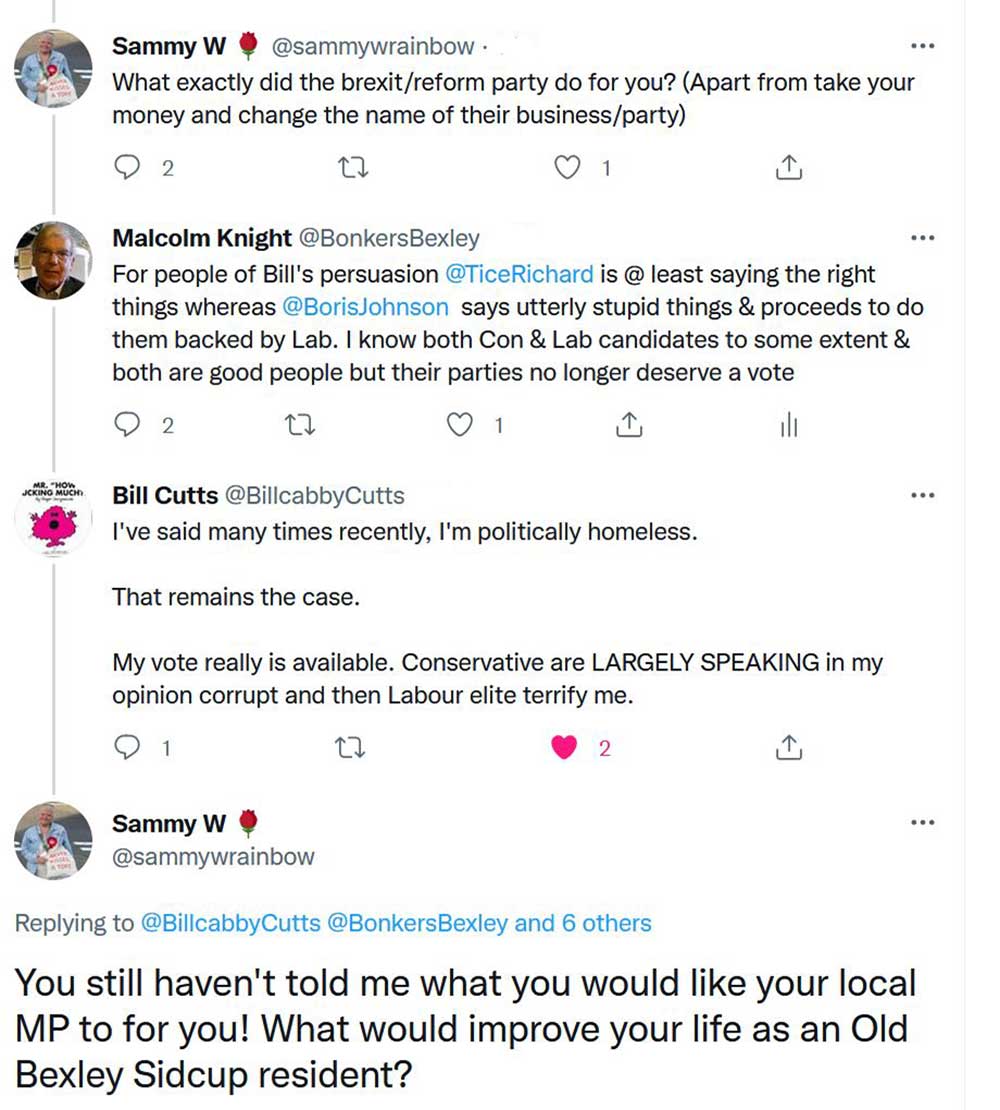 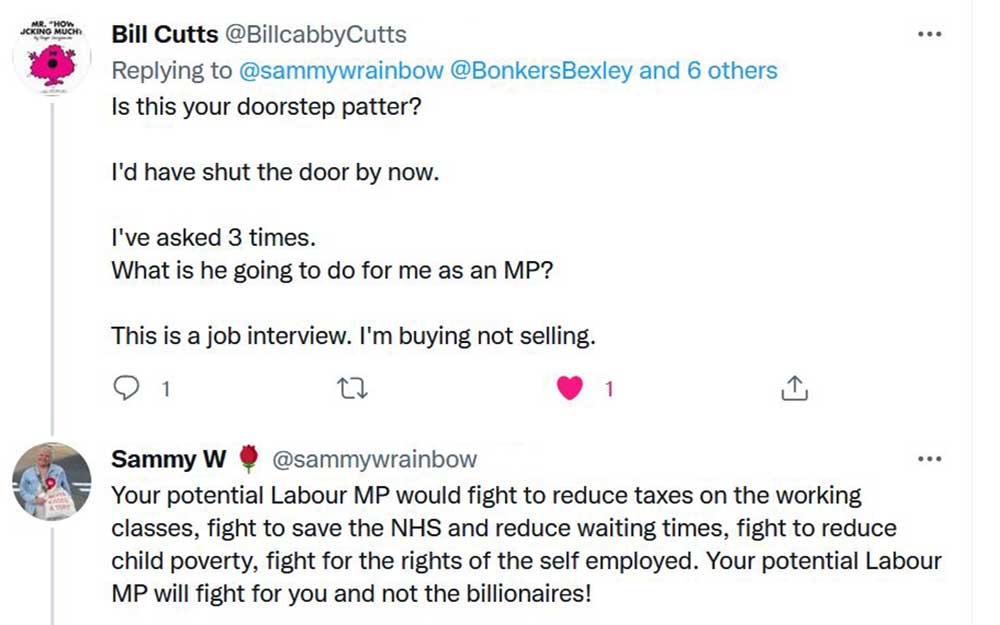 Gradually, over dozens of Tweets the conversation descended towards full on Angela Rayner mode. Bill was labelled a drinker who would not be fit to take his cab out in the morning, a misogynist and a narcissist. Sooner or later he seemed likely to be called racist because that is the way that arguments with left wingers usually go.

More alarming was the fact that Sammy claimed to know how Bill has voted at previous General Elections. “Your voting record is public if you know where to look.”

Bill was quite naturally alarmed to think that his secret ballot was not secret. Sammy told him that “Ballots have not been secret for the past eleven years.”

Digging in further Sammy claimed that Bill was tracking her address through her mobile phone usage and she was going to report him to the police.

By late last night the Twitter spat was getting into the realms of the surreal.

Bill was alleged to have campaigned for the Brexit Party in 2019 which makes him racist - about which more anon. It does not prove where his vote went. It’s like saying I am a Heritage Party supporter because David Kurten was featured here before the GLA election - but I actually voted for Shaun Bailey.

I feel really sorry for Labour candidates at times; most are decent well meaning individuals who have the misfortune to attract fanatics and obsessives. I have said before that I turned towards the Tories in my teens because all the political slogans daubed on walls were written by vandals campaigning for Hugh Gaitskell.

They have no idea of the damage they cause to their party among more rational and tolerant people and why the Labour leadership continues to support them will always be a mystery to me.

I have a feeling we are not finished with this yet.