I was determined to try not to be too partial in the run up to the Old Bexley & Sidcup by-election. I said so privately and I said so here. The fact that if I was an OB&S resident I’d be tempted by The Reform Party cannot come as any surprise given that I voted for Boris Johnson and for the past year made no secret of the fact I’d like to see him deposed by any legal means possible. Preferably a totally humiliating one.

But I am afraid Bexley Labour has brought me back to the keyboard to do something I really didn’t want to do. Their nine remaining Councillors are all well meaning people and some go well beyond that. Sally is always friendly despite her obvious disdain for my opinion of Sadiq Khan. Nicola and I are on good terms despite me kicking her quite hard a few months ago. Brenda was happy to confirm in writing that I never moved from my seat after Council Officers put out a lying Press Release that I had run amok in the Council Chamber.

Dave emails me occasionally and few could come across as a more friendly and gentle man. Mabel is lovely and been helpful to me several times including right now. Esther is always supportive and I cannot imagine anyone falling out with Stefano, I like him a lot so how come they get mixed up with such obnoxious helpers?

A few months ago a Labour activist hiding behind the moniker of Sidcup4Remain on Twitter had her solicitor send me a letter demanding I remove all reference to her on this blog despite the only references being her own Tweets and unjustified attacks on Councillors Philip Read and Danny Hackett. If I did not do so I would be reported to the police for harassment. In a weak moment I hid the relevant blogs away. Sidcup4Remain blocked me on Twitter. She is a Committee Member for Old Bexley & Sidcup Labour. 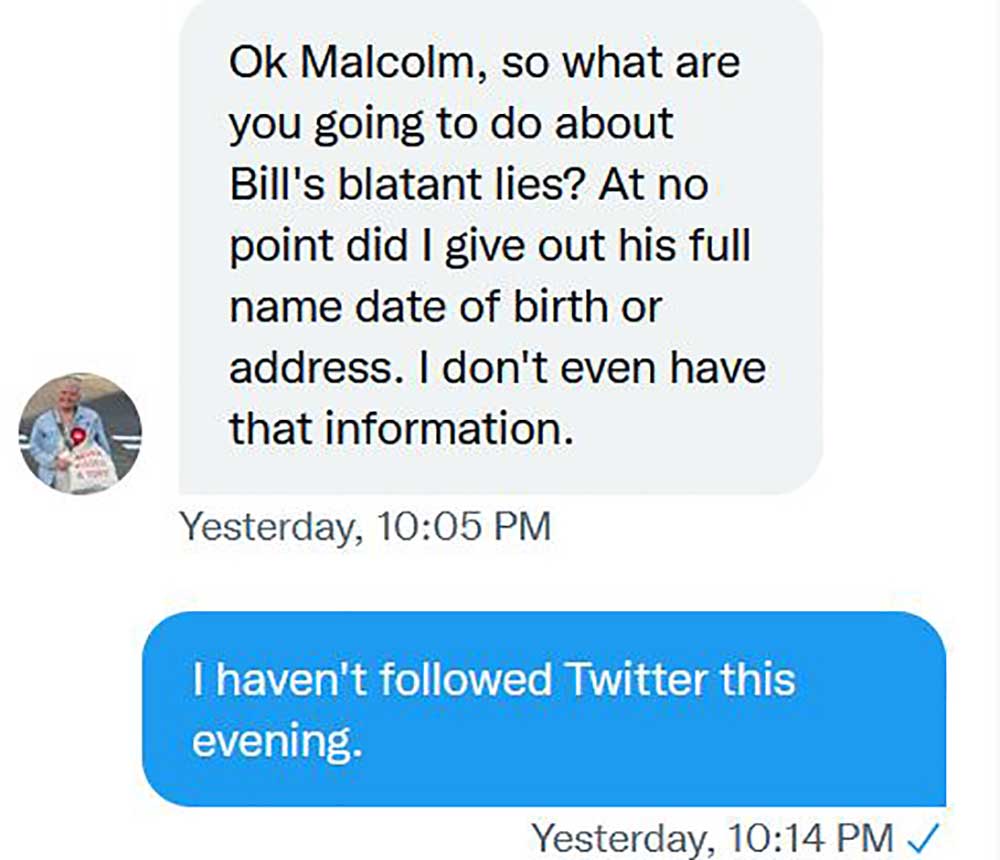 More recently a Labour activist (Sammy W) who follows @bonkersbexley sought my help when she fell out with another Twitterer known as Bill Cutts. I assume it is his real name but on Twitter you can never tell.

I replied to her Direct Messages in a friendly manner while letting her know that I was not happy with the way Labour activists play the race card at every opportunity. Last night, just as I was off to bed, I noticed that Sammy W had sent me another Direct Message. I sent a holding reply.

This morning I thought I had better answer Sammy’s message properly. I discovered that she had sent me two more DMs; one a reference to the British National Party and the other supposed evidence of what a bad man Bill Cutts is. I decided to reply to the effect I had had enough of being intermediary and trying to be fair to both sides.

However I couldn’t. I am blocked from sending more Direct Messages. I don’t care but why is it that neither the Secretary of OB&S Labour nor the Chairman of Bexleyheath & Crayford Labour (I didn't know she held that position until this morning) want to stop me reading their pearls of wisdom? Presumably the last thing they want is scrutiny.

I know a little of what OB&S candidate Daniel Francis did when his local Secretary thought she could dictate what I write here, perhaps he should try to advise Sammy. Maybe he already has, maybe that is why her Twitter account was locked overnight.

Now; who else can I upset? There must be a shifty Tory lurking somewhere.