I would like you to do me a favour and look at these Google Earth pictures centred on Abbey Wood station before reading much further. The first of them shows the totally discrete Crossrail and North Kent lines with the only set of points being to allow the Crossrail trains a choice of Elizabeth line platforms 3 and 4.

It wasn’t always going to be like that. The original plan was for both lines to share an island platform so that passengers would be able to hop from one train to another without using the stairs but engineering convenience towards Plumstead was given higher priority than passengers’ needs.

The second image shows the two Crossrail tracks entering the station but only one emerging on the other side of the flyover. The Northernmost track hits the buffers so that it doesn’t hit the flyover support columns.

The third picture shows the two North Kent Line tracks and just one Crossrail track proceeding Eastwards to allow the parking of trains should one need to be taken out of service and, courtesy of a set of points far to the East, to bring in engineering trains from Hoo without circumnavigating South London as was necessary in the early stages of Crossrail construction.

Currently the Crossrail trains can quite often be seen making test runs across London as they ramp up to the twelve planned services in and out of Abbey Wood every hour. As you will have read the signalling systems to allow that have not proved to be a doddle but the engineers will get there in the end, given enough money they always do.

The North Kent Line carries eight trains an hour in each direction and the occasional freight heading to and from Angerstein Wharf. It is a busy line.

You will need to remember the above facts to fully understand what follows.

The Plumstead side of Abbey Wood station.

The Belvedere side of Abbey Wood station. Points on the far right.

Bexley Council has led a consortium that has spent £4·85 million of taxpayers’ money on examining ways of extending Crossrail to Ebbsfleet.

Where the two would combine will be for the engineers to think about but perhaps some points could go in to the West of the station to bring Crossrail into Platform 2 or back from Platform 1. It won’t be popular with Network Rail. Points are an expensive potential weak spot in any rail system.

The proposal is to divert eight of the twelve Crossrail trains and send them on the existing tracks towards Dartford. If they use the existing overrun track (Picture 3) it will put 16 alternating bi-directional trains on to it. It has been difficult enough to get twelve single direction trains running safely. Surely even Bexley Council cannot be that mad?

Allowing Crossrail trains to use Platforms 1 and 2 would put 16 trains an hour on each of them but at least they would all be going the same way. How long will it take to drop the pantographs and the third rail shoes? 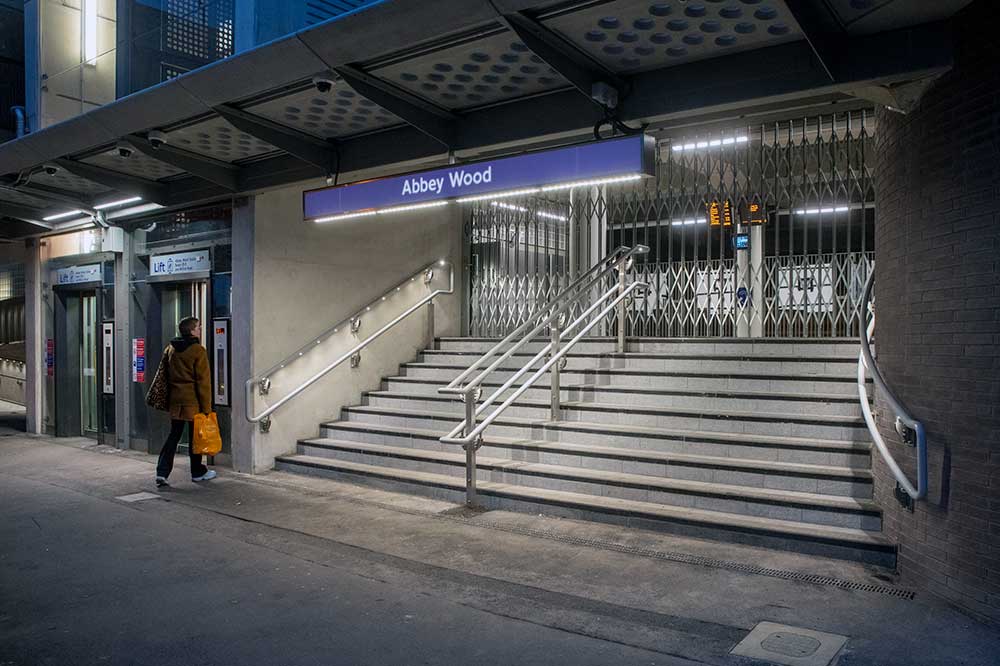 Another issue is platform passenger capacity. The stairs were criticised when the station was first opened for being too often jammed full. The answer was that they were designed for the Crossrail era and half the passengers would be using the other (Crossrail) set of stairs and some would avoid them altogether by using the ground level Felixstowe Road entrance. The same excuse was given for the congestion at the ticket barriers. There are lots more at the entrance to Platforms 3/4. Under Bexley’s plan they will only see a train every 15 minutes.

No one will use the escalator to get from Platform 1 to the Elizabeth line which was the reason for installing it because no one will alight on Platform 1 to catch the TfL service. Those with any sense will already be on one.

The ill-considered scheme is only concerned with being able to brag about bringing the Elizabeth line to Belvedere, Erith and Slade Green. It shows no sign of reconciling the throwing out of the carefully engineered passenger flow systems at Abbey Wood with safety and comfort. The station layout will be just plain wrong.

Sixteen trains an hour down to Dartford will be too much for the oldest Railway line in London so how does Bexley Council plan to tackle that? Cut the existing services, possibly lose the loop line trains via Crayford or Barnehurst or both.

Bexley Council looks to be planning a railway revenge for County Gate. How are passengers from Charlton, Greenwich and Deptford expected to get to London if Bexley Council manages to slash their services?

Fortunately the plan is more hot air from Bexley Council. If they had wanted Crossrail to run right across the borough they should have lobbied for it 15 years ago. But they didn’t; that was the era of grand isolation, campaign against river crossings, no railway and cripple inward investment so long as Knee Hill and Brampton Road are left in virginal condition. The Leader’s ward must be protected at all costs. We pay for Bexley Council’s past failures every day.

I bet they never asked for Labour’s transport guru Stef Borella opinion. Council pen pushers would rather waste your money.