It appears to be a rite of passage in Bexley that election candidates are made to ask sycophantic questions of the Leader or one of her cronies at Full Council. The first reference on Bonkers to planted questions was in April 2011.

There was something more specific a month later when Bexley Council began its campaign to deter genuine questions in earnest by publishing on its website the names and full addresses of those with the temerity to ask one. The first absolutely clear case of a planted easy question was also in April 2011 only five months after I attended my first ever Council meeting. It was by then member of the public David Leaf no less and fake questions have been a feature of Bexley Council ever since.

Just before the May 2018 election three ‘members of the public’ were described as useful idiots after asking their questions.

After election, two of the three showed themselves to be pretty good performers in the Chamber and not just good hoop jumpers. Intriguing that a fourth new Councillor in 2018 managed to dodge the ritual.

Ten days ago three more members of the public asked their questions and I described them as charlatans. That was wrong of me, I should have checked the dictionary so I apologise, the correct word is imposters. Following that Frazer Brooks held out a hand of friendship, Felix Di Netimah maintained a dignified silence and Aaron Newbury objected via the medium of Twitter and promptly blocked me when I compared him unfavourably to Friendly Frazer.

A Bonkers reader, one Twitter blocked by more Councillors than I can count, tipped me off about the Local Government Ombudsman link and another regular urged me to poke around Brent Council’s website.

Both Aaron and Felix had been politically active there. Good political news I would have thought, shouldn’t we know about Councillor’s political history? Right now Louie French is busy making his as public as possible. 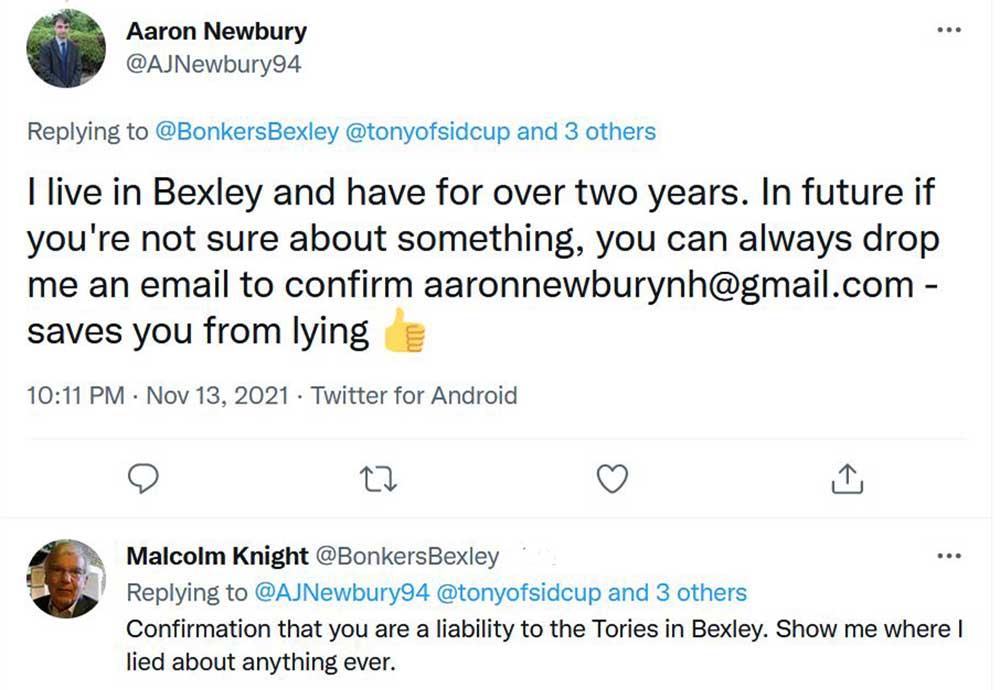 Much to my surprise, late last night Twitter alerted me to a comment by Aaron Newbury. Over the years senior Conservative Councillors have called me all sorts of things; a cretin, a wanker and in a very derogatory fashion, gay.

It says something about a Cabinet Member who regards the latter as being an insult. Labour Chairmen and the like are content with calling me a brownshirt.

None of that matters but I am rather proud of the fact that no one has ever called me a liar. Last night Aaron broke my 12 year old record.

He says I lied about him not living in Bexley. Maybe he was not fully in control of his faculties, it was late after all. I had specifically written that he had moved to Bexley.

A moment later Aaron Tweeted twice more and referred to our paths crossing at eleven o’clock at night. This was untrue. He passed me by while I was talking to Councillor Danny Hackett on the Civic Offices’ steps a couple of minutes after nine thirty. Aaron acknowledged neither of us even though he had been sitting right behind Danny at Full Council.

I composed a brief reply but Twitter would not allow me to send it. All three Tweets had been almost instantly deleted.

An hour later there was another Tweet, from one of Aaron’s political followers. I was accused of harassing a young person and referred to a Restraining Order for doing so before. Before? What is that all about?

So that’s cretin, wanker, homosexual and now child abuser from my Conservative friends. Bexley Conservatives truly must be getting desperate to silence comment.

Another thing I am quite proud of is resisting the temptation to Twitter block anyone on the grounds that I don’t believe in writing things not fit for publication and some people are in need of an education. I have three blocked accounts. A Scottish troll with single digits of followers, a Philip Read who is not ours so I am less likely to mistake one for the other and Sidcup Police who block me because I twice featured their dubious activities. Just simple retaliation on my part but I suspect the block count may have to go up to five soon.

It was a sour end to an otherwise productive day. Two Conservative Councillors and one Labour had helped me enormously in the pursuit of truth.